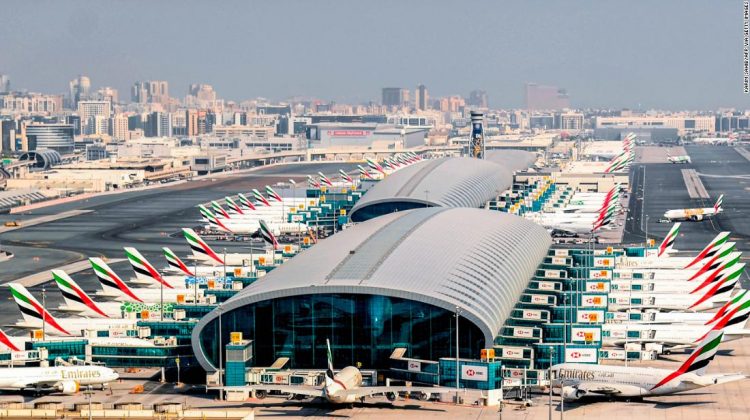 (CNN) — Eighteen months ago, its terminals were teeming with transiting passengers or travelers arriving to enjoy some desert sunshine, then Dubai International Airport became a ghost of its former self.

After retaining its crown in 2019 as the world’s busiest airport for international passengers, by early 2021 the effects of the pandemic had left many of its corridors and gates standing empty, like other such facilities around the world.

The slowdown, according to Airports Council International, led to a 70% drop in passengers at DXB to 26 million in 2020 — making it still the world’s busiest, but a shadow of its former self.

Now the airport is hoping to reclaim some of its pre-pandemic glory. On Thursday it brought its main Terminal One out of mothballs and reopened Concourse D, the huge retail area that connects to it.

It’s a move that will be watched with eagerness and caution by the economically battered global aviation industry as it looks for shoots of recovery after months of empty skies and emptier bank accounts.

If the world’s leading international hub for air passengers is getting back on its feet, then that could be an indication that other destinations and air routes will follow.

“Dubai’s aviation sector has been at the forefront of a global campaign to restore vital international air services with the opening of quarantine-free travel corridors between the UAE and multiple countries around the world,” Sheikh Ahmed Bin Saeed Al Maktoum, chairman of Dubai Airports, said in a press release.

“This move signals our confidence that the outlook for the rest of the year and beyond is one of optimism, as well as being a clear indication of Dubai’s intent to lead the aviation industry in its efforts to enable social and economic recovery of the world.”

Key to Dubai’s resurgence in air traffic has been the establishment of safe travel corridors with several countries, including Italy and the Seychelles — routes largely serving Dubai residents or transit traffic seeking a vacation getaway.

DXB is the world’s busiest airport by international passenger numbers.

DXB’s Terminal One is home to all international airlines that operate out of the airport, except for Dubai’s Emirates, flydubai and Australia’s Qantas Airways, all of which operate out of Terminal Three.

The reopening of these key facilities will enable the gradual return of more than 40 international carriers, of which some are currently operating reduced services from other terminals, the statement added.

Concourse D and Terminal One are linked by airport train, and the reopening of both will allow for an annual capacity of an additional 18 million passengers, according to Dubai Airports.

If global travel restrictions continue to ease, the number could be significantly above that, he told CNN.

He also said the reopening of Terminal One could mean the addition of 3,500 jobs across Dubai’s aviation industry, including airport, airlines, and food and beverage staff.

“There’s room for optimism that wasn’t there before,” he says. “The fact that we’ve remained, all the way through the pandemic, the busiest international airport is proof of endorsement that the future for us is equally bright.

“Our geocentric location in the Middle East is perfect and the efficiency of the operating hub that we’ve built over the years continues to show the world how it should be done.”

Some of the increase, say officials, will be down to the city’s hosting of the long-awaited Dubai Expo, which is now scheduled for October, after being postponed due to the pandemic.

Dubai Airport’s Terminal One has been deserted for 15 months.

While there is progressive improvement, John Strickland, independent aviation analyst and director of JLS Consulting, says there’s “no way” Dubai will recover to pre-pandemic levels in 2021.

“We’re too far gone in the year,” he says. “If you look at Emirates, which is of course, Dubai’s biggest customer, it’s flying around 20 A380s a week, down from 115 in the past. That’s already an indicator of low percentage of activity.”

That, he said, has surely played a role in the airline’s recently reported low earnings.

Emirates, the largest airline operating out of DXB, recorded a $5.5 billion loss due to the pandemic, down from a $288 million profit in the previous year, despite receiving a $3 billion government cash injection.

Marking the first non-profitable year in over three decades for state-owned Emirates Group, the company that controls the airline, the negative balance prompted job cuts accounting for reportedly 31% of its total workforce.

Strickland said it’s not surprising the airline lost money, but that it also did its best to cut its losses.

“Dubai has been doing its best compared to other places around the world. It’s a challenge for everyone, not least because they have to deal with a myriad of constantly shifting regulations and limitations from governments.”

Al Maktoum, also chairman and chief executive of Emirates Airline and Group, warned that while recovery was coming, the journey there wouldn’t be smooth.

“No one knows when the pandemic will be over, but we know recovery will be patchy,” he said in a press release. “Economies and companies that entered pandemic times in a strong position, will be better placed to bounce back.”

He added, “In the year ahead, we will continue to adopt an agile approach in responding to the dynamic marketplace. We aim to recover to our full operating capacity as quickly as possible to serve our customers, and to continue contributing to the rebuilding of economies and communities impacted by the pandemic.”