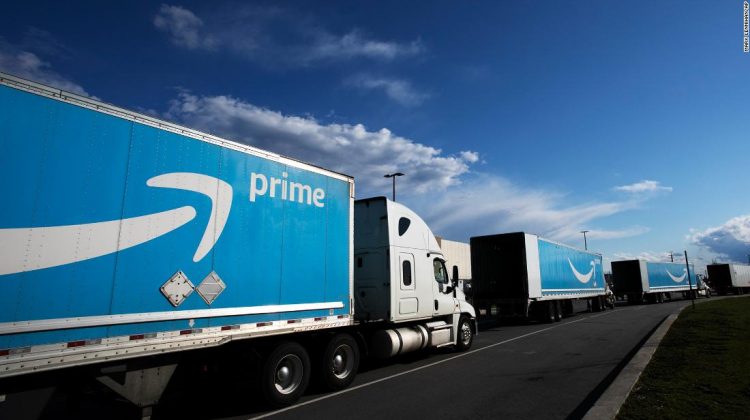 Several full-time Amazon (AMZN) warehouse employees told CNN Business they will put in a minimum of 55 hours this week as their regular 10-hour shifts grow to a mandatory 11 hours. An extra day will also be tacked onto their schedules, according to the employees, to help meet the flood of sales spurred by Prime Day, the highly anticipated two-day sale. They’ll get overtime pay (at least time-and-a-half, according to Amazon). But overtime is something workers say hasn’t been scarce during the pandemic as Amazon has at times required mandatory extra time, as well as offered voluntary extra time. The additional hours spent working also mean less time to rest before heading back for more.
Even in an ordinary week, warehouse work can be incredibly demanding. One Amazon worker described the job as “an intense workout every day” in testimony before members of the Senate earlier this year. Others echoed this sentiment in conversations with CNN Business throughout the pandemic, describing a fast-paced environment where workers are lucky if they can navigate their way through the sprawling facilities — many of which span the equivalent of 28 football fields — in time to heat up a meal, snag a seat for 20 to 25 minutes to eat and rest their feet during a shift.
Pandemic-related precautions at facilities such as limiting the number of entrances into the building and implementing one-way foot traffic policies, which remain in effect, have only added to the time crunch for some. One worker at a facility in Oregon, who spoke to CNN Business on the condition of anonymity for fear of retaliation, said all it takes to lose precious time “is one person that wants to walk at a snail’s pace in front of me.” Workers are also very conscious of the fact that nearly everything they do inside the facility is being monitored, from their time and productivity to their following social distancing guidelines.
The pandemic, and a landmark union push at one Amazon facility, shed new light on these working conditions and prompted Amazon and its CEO, Jeff Bezos, to promise changes and concede more needs to be done to improve the work experience of warehouse employees.

But that won’t be done in time for this Prime Day. Workers told CNN Business the job continues to take a big physical and mental toll — especially during periods of high demand when mandatory overtime is enacted.

“When I think of Amazon Prime Day, I think of mandatory overtime,” said Tyler Hamilton, who works as a trainer at Amazon’s Shakopee, Minnesota, facility. “For customers, maybe it’s Prime Day — for us, it is at least Prime Week.”

Natalie Monarrez, an Amazon associate at the company’s Staten Island facility, also distinguished between the way customers and workers experience Prime Day. “I think the discounts are really helpful for the customers,” she said. “It is overwhelming for the workers. But we find a way to work through it and deal with it like we always do.”

In a statement, Amazon spokesperson Kelly Nantel told CNN Business: “Even with careful planning, as an organization that has seasonal fluctuations of customer demand, overtime is sometimes necessary and when that does happen, we ensure that all employees are fairly compensated.”

“We also have a process in place so that employees who are unable to work overtime for personal reasons are able to speak with managers and map out a schedule that works for them,” Nantel added, noting that typically the company gives employees three weeks’ notice ahead of mandatory extra time but, at times, that time frame is shorter.

Monarrez, who told CNN Business she’s been living out of her car in recent years, said she’s worked several Prime Days and it tends to mean more of the same physical labor she’s used to every other day. “I throw the packages in the boxes on the conveyer belt,” she said. “I need to hit a minimum of 1,800 packages per hour, so I tune everything or everybody out and try to stay laser focused on what I’m doing so I can either meet or exceed that rate.”

According to Dania Rajendra, director of Athena, a coalition of organizations focused on confronting Amazon’s growing power, the very existence of Prime Day exemplifies the underlying issues of valuing profit and speed over workers’ well-being. “Free shipping isn’t free,” she said. “It comes at huge costs to the people who make it possible for us to get our stuff.” (Athena is organizing a series of actions on Prime Day, including hanging banners in 20 states to convey #AmazonHurts, the hashtag it’s using to draw attention to Amazon’s treatment of workers.)

Amazon has faced criticism for years over workplace conditions inside its warehouses, including around the rates of serious injuries. Scrutiny only grew during the pandemic as workers, advocacy groups, and politicians raised concerns about everything from the backbreaking pace of work to the lack of transparency around confirmed Covid-19 cases and whether some of its workers pee in bottles.
Workers staged walkouts early in the pandemic over safety conditions and later organized a milestone union election at the company’s Bessemer, Alabama, warehouse, which Amazon vigorously fought. Workers largely voted against the effort, but that vote is being appealed by the union, which alleges Amazon wrongfully interfered. (Amazon refutes this.) Meanwhile, there is a separate effort underway to form a union at the Staten Island facility, which Monarrez said she’s involved with.
Still, since the start of the pandemic, Amazon has hired hundreds of thousands of fulfillment workers with the promise of making at least $15 an hour. But according to a New York Times investigation this month, Amazon also churns through workers. The company reportedly lost about 3% of its hourly associates per week before the pandemic. The Times, citing a former Amazon operations HR head, also said Bezos did not want workers to “stick around for long,” believing people to be inherently lazy. (Amazon declined to comment on these claims to CNN Business.)
In his final letter to shareholders in April, Bezos, who will soon step down as CEO and become executive chairman, addressed the union vote and concerns around employees.

“Does your Chair take comfort in the outcome of the recent union vote in Bessemer? No, he doesn’t,” Bezos wrote. “I think we need to do a better job for our employees. While the voting results were lopsided and our direct relationship with employees is strong, it’s clear to me that we need a better vision for how we create value for employees — a vision for their success.”

A metric that’s yet to change

Just weeks before Prime Day, Amazon attempted to address a key criticism by announcing it would change how it uses a productivity tracking metric known as “time off task,” which measures the time employees are not engaging with the software tools in their work stations.
Workers have claimed this metric contributes to the stress of the job because they constantly have to keep pace for fear of being fired, despite issues that may arise through no fault of their own. Amazon said it would average the metric “over a longer period to ensure that there’s more signal and less noise,” noting that its primary goal is to understand issues that come up and “only secondarily to identify under-performing employees.”

Workers, however, told CNN Business they weren’t aware of any changes to how the metric is tracked or viewed internally. “Many times when they make decisions and make announcements, there is not an actual process in place yet to implement that,” said Hamilton. “We’ll be left here at the ground level, like, ‘OK, they announced something, but what does that mean for us?”

Amazon posted a link to the blog post regarding changing “time off task” in its app for employees, but it does not appear to have taken effect in time to alleviate the pressures workers feel on Prime Day. According to Nantel, when a new policy is issued, it will be communicated to employees through internal channels.