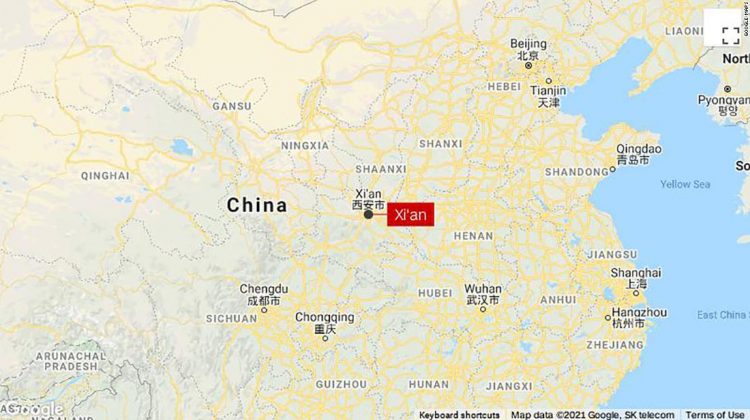 The clip, filmed in a theater in the northwestern city of Xi’an, was posted on Chinese social media platform Weibo last week. It quickly went viral, garnering more than 433 million views.

The footage shows a number of wolves running out from backstage, jumping into the aisles between audience seats and chasing performers, as part of the show, titled “Tuoling Legend” or “The Legend of Camel Bell.” The wolves and performers act out fight scenes, with a wolf pinning down an actor at one point.

The wolves don’t appear to wear any harnesses or leashes. The audience, who sit several feet away from the stage, used phones to record the scene.

“I would lose my mind if just sitting there,” one Weibo user commented on the video. Another asked: “What if something unexpected happens?”

A representative of the Xi’an branch of Huaxia Cultural Tourism, the company that owns the theater and conducted the performance, said Tuesday: “these wolves are safe and won’t hurt people.”

The representative requested anonymity for fear of harassment.

“The wolves have been domesticated for three to four generations,” the representative said. “They are legally raised and trained by professional trainers with certifications since 2018 and no accident happened in the past three years.”

The representative said the fight scenes had been practiced many times, and all the performers wore protective clothes so they wouldn’t be hurt. There are also protection nets between the stage and seats, so the wolves can’t reach the audience, the representative added.

According to the Huaxia Cultural Tourism website, the wolves only feature in one of seven scenes in the performance, which tells the history of the Silk Road — an ancient trade network, in which Xi’an was a major hub.

The representative said the scene with the wolves depicted the dangerous journey China’s ancient camel troops would take to Central Asia for trade and commerce during the Tang dynasty.

Camels also feature in the performance, according to the Huaxia Cultural Tourism website, which says 30 wolves and 20 camels are part of the show.