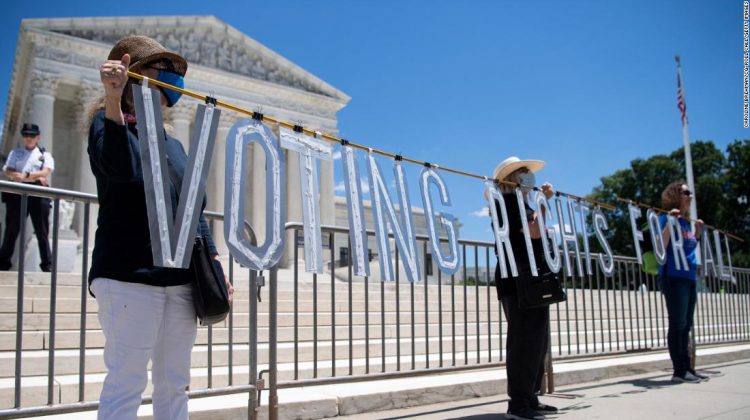 That’s because the lawsuit — triggering the latest dispute about the scope of Section 2 of the Voting Rights Act — came as the Supreme Court is poised to release an opinion on the very same section of the law. The opinion — in one of the marquee cases of the term — will come down next week. In addition, Garland timed his announcement to the exact eight-year anniversary of the court’s last big voting rights case. In the landmark decision called Shelby County v. Holder, Chief Justice John Roberts, writing for a 5-4 majority, effectively gutted a separate section of the law and declared that “things have changed in the South.”

Garland wanted to send a clear message Friday: Roberts was wrong. “I express concern about the dramatic rise in state legislative actions that will make it harder for millions of citizens to cast a vote that counts,” the attorney general said.

Garland, a former judge steeped in precedent, knows full well the impact of the Shelby County decision and will be carefully watching how the justices rule next week. But the Justice Department filing also reveals a careful strategy. It is crafted in a way that will allow it to endure even if the court’s majority further trims the Voting Rights Act next week.

The case before the Supreme Court — Brnovich v. Democratic National Committee — largely revolves around what is called the “results test” of Section 2 of the law. That is, whether the provisions of Arizona law at issue violated Section 2 because they resulted in voting discrimination. A lower court said they did.

“We hold that Arizona’s policy of wholly discarding rather than counting out of precinct ballots and the criminalization of the collection of another person’s ballot have a discriminatory impact on American Indian, Hispanic, and African American voters in Arizona in violation of the ‘results test’ of Section 2 of the VRA,” a panel of judges on the 9th US Circuit Court of Appeals said.

At oral arguments before the Supreme Court, Michael Carvin, a lawyer for the Republican National Committee, urged the justices to reverse the decision, arguing it would “subject nearly all ordinary elections rules” to challenge. Carvin and other conservatives believe the states have a strong interest in passing laws to protect the integrity of the electoral system.

In a withering set of questions, however, liberal Justice Elena Kagan pressed Carvin on his argument that laws are OK under the Voting Rights Act as long as they are race neutral and offer all voters an equal opportunity to vote. Kagan slung hypotheticals at him, trying to press the point that a law might look like it was preserving equal opportunity on its face but could in fact produce a disparate result. What about putting polling places at country clubs or limiting Election Day voting to 9 to 5 or getting rid of Sunday voting, she queried. Carvin was left to back away some from his position.

Oral arguments focused almost exclusively on the “results test,” which includes a searching look at whether a law produces a disparate impact on minority voters.

But even if Carvin wins and the Supreme Court pares down the kinds of cases that can be brought under the “results test,” that may not impact Garland’s suit, and that’s why it was carefully crafted. Because instead of relying on the “results test,” the Justice Department made a different argument: It said Georgia legislators passed the law with the “intent” to discriminate.

That’s a different test under the law.

“The courts will consider a different set of factors in order to determine whether Georgia’s legislature intentionally discriminated against Black voters in the state,” said Sean Morales-Doyle, of the Brennan Center for Justice.

“The question of discriminatory intent could come up in the Brnovich case, but the focus of that case has been on the ‘results test,’ ” he said. “That means the Supreme Court’s decision is unlikely to impact the likelihood of success in the new case.”

Rick Hasen, a voting rights expert at the UC Irvine School of Law, said in a blog post that because the Justice Department had brought its case only under the “intent test,” it “insulates it from an adverse ruling in Brnovich.” That means the new suit could go forward even “after a potentially adverse ruling.”
At the Friday news conference Garland was flanked by associate Attorney General Vanita Gupta and Assistant Attorney General for Civil Rights Kristen Clarke. The two women led voting rights groups before joining the Biden administration and have been in the trenches for years battling restrictive laws. They were bitterly disappointed when the court ruled eight years ago and hope the courts now will keep in mind something that the late Justice Ruth Bader Ginsburg wrote in dissent in 2013.

The liberal lioness accused the majority of “throwing away your umbrella in a rainstorm because you are not getting wet.”