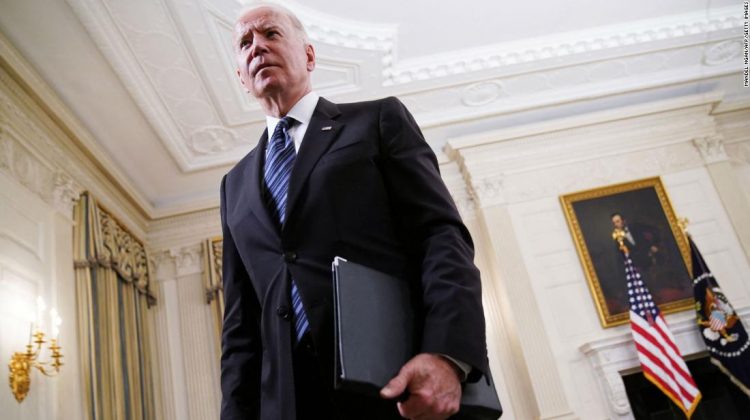 Senators emerged from another marathon infrastructure negotiating session on Wednesday, declaring they had sealed a framework of an agreement worth around $1.2 trillion with $579 billion in new spending, and planned to discuss it on Thursday with Biden, whose team was briefing him on it Wednesday night.

Senators said that while a few details still needed to be worked out and legislative language written, the White House had signed off on both top line numbers and the details of how the measure would be paid for. White House press secretary Jen Psaki said a “potential agreement” was within reach and confirmed Biden would host the senators on Thursday. The talks had moved within rage of a final agreement, although it was still not a “done deal,” one source familiar said.

The breakthrough will mean that the President’s willingness to give the Senate time to find a rare compromise will have paid off. The pact will, however, fall far short of the much more ambitious plan that Biden originally tabled and is sure to dismay liberals in the Democratic Party, who are demanding a companion proposal worth $6 trillion that they will try to squeeze through the 50-50 Senate using only Democratic votes.

The sudden rush for progress in an institution that often dawdles was brought on by the approaching July 4 recess that effectively begins in the Senate on Thursday night. Legislative time is sparse after that until after Labor Day.

The compressed timeline comes at a moment when Biden and Democrats badly need a win. Since the President signed a $1.9 trillion Covid-19 relief bill in March, it’s often looked like minority Republicans have been running the ship. The GOP crushed two Democratic priorities — a bipartisan, independent commission into the January 6 insurrection and on Tuesday used filibuster blockading tactics to kill a vast voting rights bill. Those moves further convinced liberal Democrats that Biden’s hopes of working with an opposition party that seems no longer to care about democracy are futile.

But Wednesday evening’s developments suggest a group of Republican senators also saw political advantage in a measure that would spend money to fix crumbling roads, bridges, railroads and airports in a move that loosened the normally rigid partisan estrangement on Capitol Hill. That movement puts Biden on the cusp of finally realizing the bipartisan infrastructure dream former President Donald Trump so dramatically failed to achieve.

An infrastructure bill would be especially important to Biden because first-term presidencies are all about momentum as a president’s power to force action tends to wane quickly. If Biden doesn’t rack up some legacy achievements soon, his capacity to do so will diminish. And Democrats are also anxiously eying the calendar knowing their precarious hold on power on Capitol Hill may end after midterm elections next year.

The infrastructure and policing initiatives represent critical policy priorities. But for Biden they also come with symbolic significance. In his inaugural address in January, the President declared that politics “need not be a raging fire destroying everything in its path” and that Americans should treat one another as neighbors not adversaries. If the President fails to get a deal on infrastructure especially, it’s hard to see other policy areas where he might — and a central premise of his 2020 campaign will be called into question.

This explains the President’s willingness to cut the expansive vision of his original plan, to trim spending on items like home health care and housing to satisfy the roads-and-bridges view on infrastructure of Republicans. He’s also dropped his insistence that the bill must be funded with a hike in corporate taxes as the GOP seeks to wall off the Trump White House’s tax reform law.

While Biden has infuriated many on his own side, a bipartisan bill signing ceremony would be politically valuable for a President who has pitched a moderate image, despite the considerable ambition of his domestic agenda.

Voters who are not particularly tuned in to the arcane complications of filibuster rules and the perils of thin congressional minorities would see a President saying he kept his word — a valuable weapon in the midterms.

Progressives ‘out of patience’

It isn’t a certainty that the push for infrastructure spending and police reform will die if agreements are not finalized on Thursday. And both proposals, even if agreed upon, would still face a complicated path into law.

But forward motion on both tracks could easily stall over the coming recess if deals are not cut now. If an infrastructure package did not emerge, Biden and Democratic Senate Majority Leader Chuck Schumer would face pressure to halt talks with Republicans from frustrated progressives.

“I’m certainly out of patience and we’re running out of time on infrastructure,” Democratic Sen. Richard Blumenthal of Connecticut told CNN’s Manu Raju before news of Wednesday’s deal.

Another reason why it may be now or never for these key agenda items is that when Congress returns after Labor Day, it will face what is shaping up to be a bitter battle over raising the debt ceiling that will drain whatever slim appetite exists for bipartisanship as midterm elections next year loom larger.

Negotiators worked into Wednesday evening in the quest for an infrastructure agreement — seeking buy-in from a group of Republican senators that would help them get around the minority’s filibuster offensive.

In the thick of the action — the second attempt to do a bipartisan deal — was West Virginia Democratic Sen. Joe Manchin whose moderate leanings have given him extraordinary influence given the imposing math of a 50-50 Senate.

While Biden had most to gain from the infrastructure talks, Manchin’s credibility is also on the line. Many of his colleagues regard the Mountain Stater’s perennial quest for Republican support as naive. He has already failed to change GOP minds on the insurrection commission and voting rights.

Manchin’s insistence on making his votes conditional on measures that have Republican support has effectively handed the minority a powerful new tool — since by not cooperating they can effectively scuttle the Democratic agenda.

But the senator left the negotiations on Wednesday evening and said, “Everyone in that room agreed on the framework.”

The sticking points of the deal come down to how it will be financed. Republicans refuse to raise taxes. Biden opposed a GOP proposal to index the gas tax to inflation or to charge drivers of electric vehicles.

If Biden signs off, it will require complex congressional choreography to get the bill into law.

Progressives, dismayed at Biden’s diminished ambitions for the package, say that they will not guarantee their votes, including in the House of Representatives, without a simultaneous bill that includes many of the measures that Republicans got removed from the President’s original plan.

“These two things are, I think, going to have to travel together, for either of them to have a chance of passing,” Sen. Michael Bennet, a Colorado Democrat, told CNN’s Erin Burnett on Wednesday.

The larger measure would require Schumer to use a device known as reconciliation that is reserved for budgetary measures. Senate Budget Committee Chairman Bernie Sanders said on MSNBC on Wednesday that he was certain that moderate Democratic senators would back the two-track strategy.

But Manchin seemed squeamish about the size of the reconciliation bill that his colleague from Vermont is drawing up.

Both Schumer and House Speaker Nancy Pelosi emerged from a two-hour meeting with White House officials Wednesday night and expressed optimism that they could move both bills in July, a month that is now shaping up as a blockbuster period for Biden’s agenda.

“One can’t be done without the other,” Schumer said.

There is uncertainty, however, over whether sufficient Republicans will sign onto an infrastructure deal if it is accompanied by a separate spending blitz that Democrats will try to pass on their own.

Republican Sen. Lindsey Graham of South Carolina said on “Fox News Sunday” this week that such an approach would be “very problematic.”

“If you want to work with Republicans to spend a trillion dollars on infrastructure, it’s available to you,” Graham said, paraphrasing his message to Biden. “If you don’t want to go that route and you pick a $6 trillion reconciliation package, I think you’ll get a lot of pushback from every Republican.”

As details broke of an infrastructure deal, negotiators seeking to narrow divides between Democrats and Republicans on police reform are yet to announce an agreement. One of the negotiators, Republican Sen. Tim Scott of South Carolina, previously said that a package needed to be agreed on by the end of June.

One of the top Democrats in the talks, Rep. Karen Bass of California, told CNN on Wednesday that the negotiations, bogged down on the issue of immunity in courts for police officers accused of violent conduct, had some way to go.

A deal on police reform on Thursday before lawmakers go on recess would turn what is already looking like a very good day for Biden into an even better one.