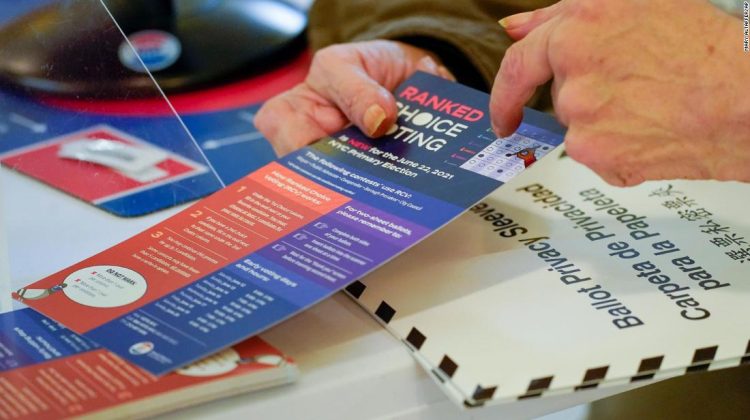 Under this system, voters rate their top five choices in order of preference instead of picking just one — a change that allows the city to avoid a separate runoff election in the crowded 13-person Democratic mayoral primary, where no candidate is expected to reach the 50% threshold required to win the primary outright. (The general election, to be held in November, will use a standard ballot.)

But while it’s sometimes referred to as “instant runoff” voting, the primary vote count in New York will be anything but fast, because the city needs to wait to begin count mail ballots.

While New York will release preliminary results from in-person voting once polling closes on June 22, it’ll be about a week before the Board of Elections can start further tabulations or begin opening mail ballots — which are expected to play a significant role in the mayoral primary.

Even then, it might be several more weeks before the final results are known.

Here’s the current calendar from the New York City Board of Elections:

Here’s what to know about how it works.

How the ballots look

Unlike a traditional ballot, which just has one place per candidate to mark a choice, a ranked-choice ballot has a grid. For each race on this ballot, candidates are listed on the left, and each column corresponds to a choice: either first, second, third, fourth or fifth.

Errors could be a problem

There are two major mistakes that could result in votes being invalidated.

Voters may not rank a candidate more than once on a ballot. Even if they’re a big fan of just one candidate, trying to mark the same candidate as a first, second and third choice is exactly the same as marking them just as a first choice and leaving the rest of the choices blank.

Source: NYC Board of Elections

Voters may not select multiple candidates in one ranking. Giving more than one candidate the same ranking will invalidate not only that choice, but also any further rankings in that race. For example, if two candidates are marked as a voter’s second choice, that ballot will be invalidated after the first choice is eliminated. Voters are not required to rank five candidates. If a voter only has three choices, ranking them in spots one, two, and three while leaving spots four and five blank is acceptable.

How the count will work

If no candidate receives more than 50% of the first-choice votes, tabulation will be conducted in rounds.

The candidate with fewest votes after the initial count is eliminated and all ballots for that candidate will be reallocated to the next highest-ranked candidate selected. That process will continue until two candidates are left, with the winner determined by who has the most votes in that final round.

Results of a ranked-choice election also look different from other elections.

In previous elections, a simple list of candidates with vote totals for each would be shown. Ranked-choice elections results are displayed in a grid. Each column represents a round of the ranked-choice voting process. The candidates marked in red received the fewest votes and is therefore eliminated. Those votes are redistributed to whomever those voters ranked next on their ballot. That’s why remaining candidates can gain votes each round. When there are only two candidates left, whoever has the most votes wins.

The other unique element of these results is the row at the bottom for “inactive ballots.” Those ballots, also sometimes called “exhausted” ballots, are ballots for which there are no candidate selected who remains in the running.

For example, if a voter selects only first and second choices, and those candidates are eliminated in the first two rounds, their ballot would be “inactive” and won’t be included in the rest of the process.