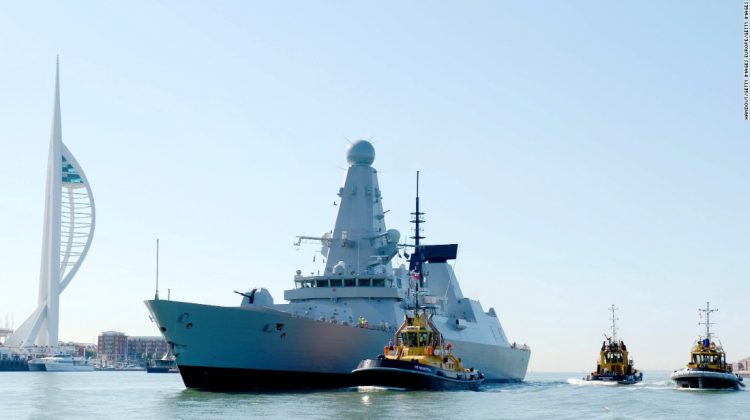 “It’s never about what is happening in a particular place; it’s all about others who are watching and the conclusions they are drawing,” said Nigel Gould-Davies, senior fellow for Russia and Eurasia at the International Institute for Strategic Studies (IISS) in London. “I think it is right now to focus on the wider context and the longer term lessons from this.”

And while experts debate its reasons for doing so, Gould-Davies said the decision only amplified “the very difficult Anglo-Russian relationship” that has existed for some time.

“It’s not fundamentally different to anything that Britain and its partners have done in other respects, such as the sanctions packages that the US and Britain have applied in Crimea,” he added. “It’s asserting that in a specifically naval way.”

The presence on board of a BBC reporter, who said he witnessed Russian warplanes and naval vessels buzzing the ship, only heightened the theatrics of the ensuing flare-up.

But Kremlin officials accused the United Kingdom of a “deliberate, planned provocation” and said Russia had the right to “bomb on target” when foreign ships violate its sea borders.

Kremlin spokesman Dmitry Peskov said on a conference call with journalists that Russia is “obviously concerned about such actions of the British ship.”

In the next few days, Russian eyes will be on 32 more ships as the United States and its partners, including Britain, kick off the annual Sea Breeze exercises in the Black Sea region.

A press release this week from the US Navy’s Sixth Fleet announced that the exercises, co-hosted by Ukraine, will be the largest in the 25-year history of the event, with 5,000 troops and 40 aircraft from the 32 US partners scheduled to take part.

Russia “will, if necessary, react appropriately to the developing situation in the interests of ensuring Russia’s military security,” Russian Defense Ministry Spokesman Maj. Gen. Igor Konashenkov said, according to TASS.

The UK-Russia naval confrontation also took place on the same week as the European Union, which will have 10 members participating in the upcoming Sea Breeze exercises, made overtures to Russia to enter a new phase of dialogue and cooperation.

German Chancellor Angela Merkel urged the EU to stand together against “provocations” from Russia, but also to seek direct talks with Russian President Vladimir Putin, saying the bloc must “create forums for dialogue.” Her comments on Thursday echoed similar remarks from French President Emmanuel Macron on Wednesday, and follow a recent summit between US President Joe Biden and Russian leader Putin.

“This is a moment that comes just as France and Germany now, to the surprise and disconcertion of a number of smaller EU countries, are trying to establish some sort of new relationship with Russia,” said the IISS’s Gould-Davies. “If Britain still were in the EU, it would have been in a position to have warned against this.”

Instead, Russia’s aggressive response to the alleged British naval incursion may have been designed to paint the UK as an outcast in its approach to the country. Aiding attempts to draw such a narrative would be the recent summit between Biden and Putin.

“The UK was conspicuous by its absence” in the discussions between Merkel and Macron, James Nixey, director of the Russia and Eurasia program at Chatham House, told CNN.

“It has very much gone in the other direction with this deft — not provocative, but deft — move.”

But Nixey feels Russia’s “theatrical” response may be welcomed in London. He suggested the UK’s aim — “showing Russia where its red lines are, and not ceding to its terms” — was achieved. “This is in my view a rather deft piece of standing one’s ground in the wider political situation,” he said.

The Kremlin likely also had a domestic audience in mind, some experts said. “It would be unusually risky to take the sort of actions that Russia claims to have taken — including dropping bombs in front of a foreign vessel,” Sidharth Kaushal, a research fellow in sea power at the Royal United Services Institute (RUSI), told CNN.

“The Russians have been working to push the narrative that the Royal Navy acted provocatively and was driven away — which might be both for domestic consumption and to reinforce international perceptions of Russia’s red lines,” he said.

HMS Defender is part of the Royal Navy’s Carrier Strike Group 21, which is set to soon move toward the South China Sea — where China has transformed reefs and sandbars into man-made artificial islands, fortified with missiles, runways and weapons systems.

Britain was “asserting the principle of freedom of navigation,” Gould-Davies noted. “This is something that China is sensitive to with respect to the South China Sea.”

China claims almost all of the 1.3 million square mile South China Sea as its sovereign territory, running up against claims from the Philippines and several other nations.

Beijing already accuses Washington and other foreign navies of stoking tensions in the region by sending in warships.

“China will be looking to see if the British are as bold in the South China Sea as they are in the Black Sea,” Nixey added. “That is a can of worms that the UK may be less willing to open by comparison.”