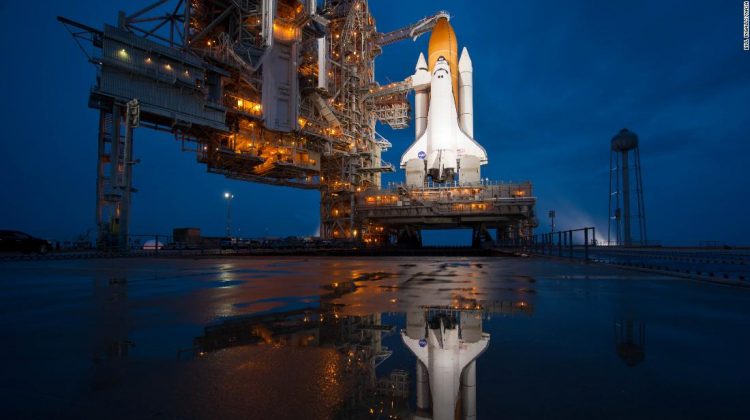 The space shuttle Atlantis sits on a launch pad in Cape Canaveral, Florida, ahead of its final mission in 2011. It was the last flight of NASA’s space shuttle program.

For the past 30 years, Bill Ingalls has had a front-row seat to some of NASA’s most historic moments.

As the agency’s senior contract photographer, he’s been in mission control when rovers landed on Mars. When we said goodbye to America’s most famous astronaut, he was there with exclusive access. And he’s documented hundreds of landings and launches both at home and abroad.

“Bill has connected people far and wide and truly touched the world with his work,” said Space Foundation CEO Tom Zelibor, who announced this week that Ingalls would be receiving the Douglas S. Morrow Public Outreach Award. “It is visual artistry like his that opens eyes, hearts and minds to what we as a species are capable of doing when we work together.”

A boy watches as the retired space shuttle Endeavour is moved to the California Science Center in 2012.

A rocket launches an unmanned NASA spacecraft from the Cape Canaveral Air Force Station in 2013.

Ingalls, who first started at NASA as a summer intern, is humble about his work and grateful for the opportunities he’s had over the years.

“The subject matter is irresistible,” he said. “It’s fascinating and interesting, and the history behind it is really strong and powerful. And of course as much as the history is powerful, where NASA is taking things for the future is always fascinating and interesting, too. Those two things alone are enough to make it a great place to be a photographer.”

Ingalls supervises a team of five for NASA’s photo assignments. One of the most recent shoots was the landing of SpaceX Crew-1 in May. Four astronauts returned from the International Space Station, landing in the Gulf of Mexico aboard a Crew Dragon spacecraft. It was NASA’s first nighttime ocean landing since Apollo 8 in 1968.

For much of the past decade, Ingalls has had to photograph landings in Kazakhstan because NASA — in the wake of the space shuttle program — relied on Russian Soyuz spacecraft to get astronauts to the ISS.

Depending on the time of year, this can involve subzero temperatures — not exactly an easy environment to take photos in. But it’s still a thrill for Ingalls.

“The Soyuz landings are always exciting, hanging 10,000 feet out of a helicopter, chasing the capsule coming down,” he said.

When the spacecraft lands, Ingalls is one of the first people the astronauts see back on Earth.

One of his most striking photos is of astronaut Cady Coleman peeking out of the window of a Soyuz spacecraft shortly after landing in 2011.

“I’ve only captured that kind of moments a few times,” he said. “Their heads are not always able to twist around quite like that. It’s pretty tight in there.”

Ingalls takes great care to document the scene while giving workers plenty of space to extract the crew. He also has to stay clear of certain parts of the craft that might still have radiation coming off it.

For launch events, Ingalls can’t get nearly as close. Depending on the launch vehicle, he could be anywhere from a mile and a half to 3 miles away when it takes off.

Launches can make for some of the most awe-inspiring photos, but that doesn’t mean they’re easy.

“The rocket doesn’t change much. The pad doesn’t move. So it’s always a creative challenge,” Ingalls said. “What can we do to show this same thing, that happens repeatedly, in a unique and interesting light?”

The moon is seen behind the space shuttle Discovery as it sits on a launch pad in Cape Canaveral in 2009.

Ingalls and his team will experiment with position and exposure and try to find different ways to frame the scene. One of their favorite things to do is what he calls “streak photography,” using long exposures that show the whole arc of the launch.

They’ll also set up remote cameras in places where they physically can’t be, such as the edge of the launch pad.

“We’ll put out lots of cameras depending on the launch and how much gear we can take with us, because sometimes they fail or sometimes they get smoked out or, occasionally, they melt,” Ingalls said.

Ingalls’ job entails so much more than launches and landings. His team covers NASA science missions across the world. He’s been inside the White House Oval Office and an active volcano in Alaska. When Neil Armstrong, the first man on the moon, died in 2012, Ingalls attended his burial at sea.

“I’m not the world’s greatest photographer; there are a million photographers better than I am,” he said. “I think the lesson is that it’s about building trust. I’ve been afforded great trust among my NASA colleagues to do what I do. Which parlays into access.”

Ingalls said his job has evolved since he first started in 1989, and his photography has as well. He’s still learning, even to this day.

“Every year, I feel like I’m just on the cusp of ‘getting it’ — and I know that’s not unique,” he said. “I hear plenty of jazz musicians that I love talk about playing the same tune over and over and being asked, ‘Don’t you get sick of playing that?’ And they’re like, no, I just haven’t nailed it yet. I haven’t got it down yet.”

He’s never been on one of the zero-gravity flights that people can take nowadays. And he’d like to visit Antarctica, where NASA has been studying climate change.

“That’s something that I personally care about a great deal,” he said. “Any way that I can help in my photography skill set to help support that, I’d be excited by.

“Short of that, going to the space station would work,” he said with a chuckle. “That’d be good, too.”