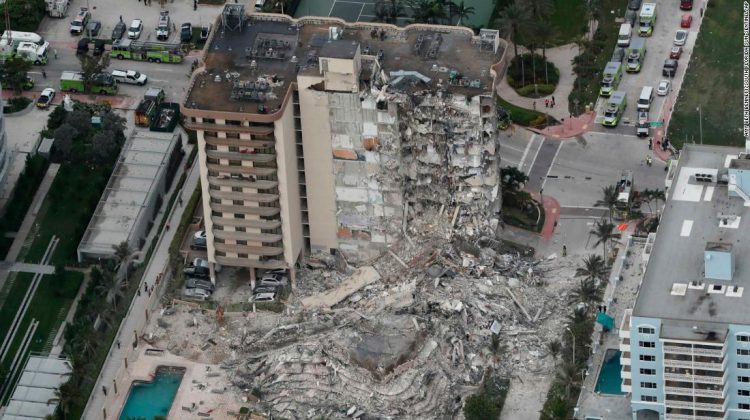 Residences: The oceanfront building contained 136 one-, two- and three-bedroom units, according to real estate records. Most are between 1,200 and 2,243 square feet.

Ongoing construction: At the time of the collapse, the building was undergoing work on its concrete roof, Burkett said, but it’s unclear if the work was a factor in the collapse.

What’s nearby: Champlain Towers South is one of three buildings (there are also east and north towers) playing host to more than 300 collective residences. It’s located along the Atlantic Way in Surfside, about a block from North Beach Oceanside Park and about a mile south of Bal Harbour. Miami Beach lies about seven miles south.

The tower sits among several tony condominium and hotel towers, including the Four Seasons Hotel at The Surf Club, a few blocks north. Ivanka Trump and husband Jared Kushner reportedly relocated to a nearby residence earlier this year.
Who lives there: 5,700. About 54% residents are non-Hispanic White, while 45% identify as Latino or Hispanic, according to the US Census Bureau. In 2018, Surfside was home to about 2,500 Orthodox Jewish residents, according to The Times of Israel, and there are at least five synagogues within a short drive of Champlain Towers.
More about Surfside: The town sits on a barrier island between the Biscayne Bay and Atlantic Ocean. The median rent is about $2,000; median household income is $69,000; and median home value is $626,000, July 2019 census records say.