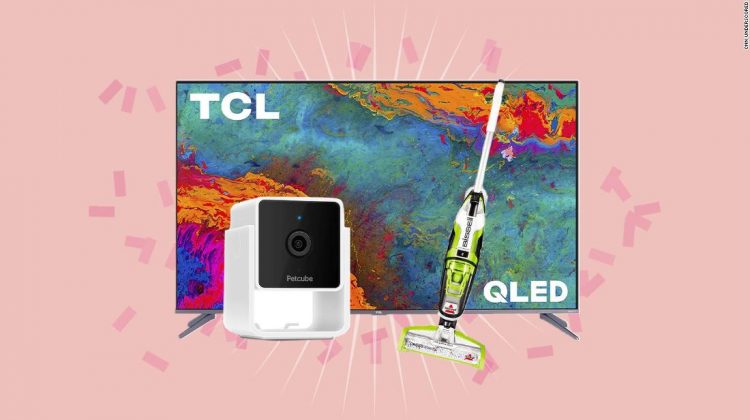 We shop like it’s our job — because it is. That’s why we decided to share all the goods we’re picking up for ourselves this Prime Day.

I didn’t know I needed these Holikme Drill Brush Power Scrubbers until I saw them featured as a Prime Day Lightning Deal. These will be perfect for power cleaning everything from the bathroom to patio furniture, and it’ll give me an excuse to break out the drill more often. —Dan Toy, copy editor

Spending the past year locked inside with my cat has been a treat, but now that things are opening back up and I’m out of the house more often, I’ve found that leaving her is harder than ever. With the Petcube camera I can at least keep an eye on her whenever I’m not home. — Delaney Strunk, programming editor

I have never had a nice wine bottle opener and this Prime Day, I decided to finally change that. I’ve heard wonderful things about electric wine openers and after seeing this deal that gives me not only a top-rated and beloved electric opener but also a foil slicer, pourer and two high-end wine stoppers, I couldn’t resist. —Rachel Lubitz, lifestyle editor

I’ve been leaving the house more again, which has been giving me some serious separation anxiety from my dog. That’s why I finally decided to snag the Blink Mini, which will allow me to easily keep tabs on Marie from my phone while I’m out and about. Considering it’s less than 20 bucks right now, I didn’t think twice. —Michael Andronico, senior tech writer

All pet owners should use this Prime Day to stock up the basics for their furry best friends! These doggie poop bags are 40% off and are the best ones I’ve owned because they’re super durable, totally opaque and the 900-pack means you’ll never run out of them. —Rosanne Salvatore, deputy editor

I’m in the process of upgrading my bedroom, and the first thing on my was new pillows. I’m a side sleeper, and Casper’s Original Pillow seems to offer the perfect amount of cushion while also providing enough support for my head and neck. —Stephanie Griffin, social media strategist

I haven’t upgraded my makeup bag in quite a while, and Amazon Prime Day is the perfect excuse to pick up some new additions at a great price! As someone who loves and appreciates clean beauty products, I’ve had my eyes on the Glo Skin Beauty Pressed base for a long time. Not only is it talc- and paraben-free, but it’s super buildable and comes in so many different shades too! —Stephanie Griffin, social media strategist

I bought this nifty selfie-stick because it’s summer and I want to take photos and set up shots on the go, which will but much easier with this handy device. —Natasha Hatendi, photo editor

I already own a pair, but I’ll be keeping an eye out on Prime Day for these to go on sale so that I can snag a few more pairs for my family and friends to give as birthday or holiday gifts! They’re a great, affordable alternative to other wireless earbuds, plus the colors are vibrant and fun. —Stephanie Griffin, social media strategist

While the 5-series I wanted wasn’t on sale, the TCL 4-series was $150 off during a lightning deal. I was debating between this one and the similar screen equipped with Roku, but I ended up pulling the trigger on this one since I already have an Apple TV. —Kai Burkhardt, associate editor

As a cold brew fiend, I’ve been eyeing cold brew makers for a while now, and I finally bit the bullet on this Primula Burke Deluxe Cold Brew Iced Coffee Maker for Prime Day. At just over $12, it was a steal, and I can’t wait to save money by making my own cold brew right at home (not to mention it’ll look great in my kitchen). —Dan Toy, copy editor

I have one True & Co bra already, and it’s one of the most comfortable I own. So it was no-brainer to pick up a second one while it was on sale for Prime Day. The seamless fabric is super soft, and this Berry Conserve colorway really caught my eye. —Chelsea Stone, commerce editor

I’m about to go on a roadtrip, and since I’ll probably have neck pain after staring at the computer during Prime Day, I figured I’d splurge a bit and get our pick for the best travel pillow of 2021. —Kai Burkhardt, associate editor

Claw clips are one of my favorite summer hair accessories, and I love these tortoise shell ones. They look like they’re just the right size, and they’re affordable enough that I won’t be devastated if (or, more realistically, when) I lose at least one of them. —Hayley Saltzman, head of social

I have an Eero Mesh Wi-Fi System (our pick for best mesh Wi-Fi, by the way), and I love it, which is not something I ever thought I’d say about mesh Wi-Fi. My network connectivity in my bedroom is a tad spotty though, and the discount on this Eero Beacon convinced me to spring for extender to perfect an already almost-perfect system. —Chelsea Stone, commerce editor

I’ve been wanting to buy stasher bags ever since I read this review, so I snapped these little ones up as soon as I saw a Prime Day Deal! —Hayley Saltzman, head of social

I am the queen of the “low battery” notification, but I feel like it’s time for my reign to come to an end which is why I’m finally buying the Anker Nano Charger. I love that it lets you fast charge your phone, and the 6ft cord makes it easy to watch Tiktok from the far side of my bed while still staying connected. —Delaney Strunk, programming editor