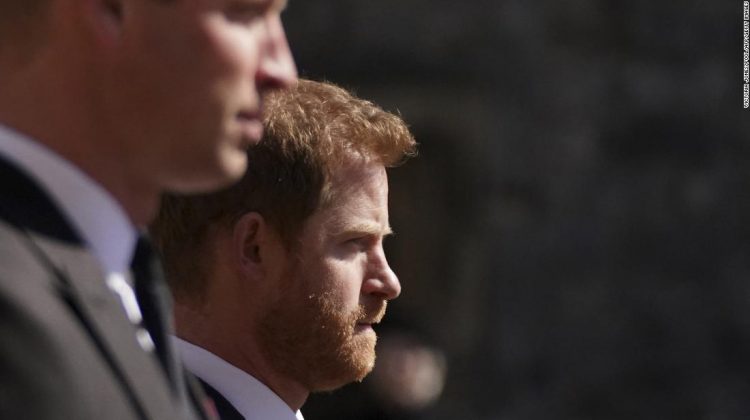 London (CNN) — Death brings the living together, they say. It was at their grandfather’s funeral that we last saw William and Harry together and it will be at the unveiling next month of a memorial to their mother — Diana, Princess of Wales — that we see them reunite once more.

The brothers co-commissioned the statue from British sculptor Ian Rank-Broadley — whose portrait of the Queen appears on all British coins — to “allow all those who visit Kensington Palace to remember and celebrate her life and legacy.” It’s been given prime position in the palace’s Sunken Garden, which Diana enjoyed when she lived there.

That quote was from 2017 — in the days when the princes were still issuing joint statements. Nobody could have predicted how their relationship would break down to the point where they now live on separate continents and are barely on speaking terms.

Ahead of the unveiling there will be much talk of the body language between the two, how Meghan couldn’t make it and what all of it may or may not mean for the monarchy. But these are two men who know the media better than anyone, having grown up in the shadows of the most famous women in the world.

Their position is unenviable. They blame the media for their mother’s death. Yet, they have to allow cameras in to capture the moment the statue is revealed for the first time. That’s because they also accept, and indeed celebrate, their mother’s legacy and public role. She wasn’t just a celebrity, she was for many years a senior royal who leveraged her profile for her philanthropic efforts, particularly for her work on raising awareness of AIDS and the scourge of disused landmines.

In that 2017 joint statement, the princes said, “it is clear the significance of her work is still felt by many in the UK and across the world, even 20 years after her death.”

It’s now almost 24 years since Diana died, and while the brothers’ relationship is not what it once was, they still agree on one thing: the importance of keeping her memory alive. That’s what the July 1 unveiling is about. The princes will use their profiles to bring attention to the event, before using their experience of being in front of the cameras to keep attention focused on Diana, on what would have been her 60th birthday.

Ahead of Prince Philip’s funeral, there was much written about the tension between the pair, and they managed to take the air out of that by entering the church separately and exiting it chatting. Nobody expected that, and it meant they didn’t draw focus away from the event.

There is nothing you can teach these brothers about optics, and they will find a way to keep the attention away from themselves at the unveiling and on their mother. That doesn’t mean there won’t be any tension between them, just don’t expect to see it.

THE ROYALS HIT THE G7.

When Australian Prime Minister Scott Morrison was welcomed to Windsor Castle on Tuesday for a rare in-person engagement with the Queen, he declared she had been “quite the hit” at the recent G7 summit. As the pair posed for photographers, he added, “Everyone was talking about you at dinner the next night.” To which the monarch joked, “Oh Lord, were they really?” The exchange at the top of their meeting may have seemed like benign small talk but this was yet another example of the Queen doing what she does best — putting people at ease while delivering a masterclass in soft diplomacy.

With the UK playing host to the world, the Queen — joined by Prince Charles and wife Camilla as well as the Duke and Duchess of Cambridge — made an appearance at a welcome reception on Friday night. Rolling out the royals in this way is a tactic many British prime ministers have used to curry favor with world leaders — and once again the charm offensive seemed to tick all the right boxes.

Displaying her dry wit, the 95-year-old quipped, “Are you supposed to be looking as if you’re enjoying yourself?” while taking the obligatory G7 family photo. Her joke drew chuckles from US President Joe Biden and his French and German counterparts, Emmanuel Macron and Angela Merkel. Earlier on Friday, the Queen delighted onlookers at a charity lunch by using a ceremonial sword to cut a cake, saying “this is something that is more unusual” in response to being offered a knife.
And then, of course, there was the highly anticipated afternoon tea Biden and his wife, Jill, shared with Elizabeth at Windsor on Sunday. The red carpet was rolled out for their arrival and the occasion was sprinkled with a bit of pomp and circumstance in the form of an honor guard. The moves left a good impression on the new US President. Before departing the UK, Biden told reporters the Queen was “very generous” and that she “reminded me of my mother.” He also revealed his wish to have spoken with her for longer and that he had invited her to the White House. A busy weekend for Her Majesty but one in which she displayed the power of the monarchy.

WHAT ELSE IS HAPPENING?

On Friday, the Duchess of Cambridge launched The Royal Foundation Centre for Early Childhood. In a video announcing the center’s creation, the duchess said the goal was to “raise awareness of why the first five years of life are just so important for our future life outcomes.” Kate has campaigned for years on how instrumental psychological, social and emotional support can be for early childhood development. The subject is a key focus of her public work as a royal. “By working together, my hope is that we can change the way we think about early childhood, and transform lives for generations to come. Because I truly believe big change starts small,” the duchess added. Last week, she joined US first lady Jill Biden at a school in Cornwall to discuss early childhood development and wrote a joint op-ed for CNN.

The Duchess of Sussex’s debut book, “The Bench,” has cracked the New York Times best seller list in the children’s picture book category a week after it released. The book, which has watercolor illustrations by Christian Robinson, was inspired by a Father’s Day poem for Harry. Meghan thanked fans for their support in a message published on the couple’s Archewell Foundation website. “While this poem began as a love letter to my husband and son, I’m encouraged to see that its universal themes of love, representation and inclusivity are resonating with communities everywhere,” she said.

Sophie, Countess of Wessex revealed the royal family is still grappling with the loss of the Duke of Edinburgh. Speaking to the BBC this week, she said Philip’s death had “left a giant-sized hole in our lives” before adding that the pandemic had “slightly skewed” the grieving process. She explained coronavirus had made it “hard to spend as much time with the Queen” and how “the immediate loss isn’t felt in the same way as if somebody was in the house with you all the time.” She added: “It’s only when you do the normal things that you would have done with them and you suddenly realize that they’re not there.”

Queen Elizabeth’s eldest grandson, Peter Phillips, and his wife, Autumn, have officially gone their separate ways after finalizing their divorce settlement this week.

“Mr Peter Phillips and Mrs Autumn Phillips are pleased to be able to report that the financial aspects of their divorce have been resolved through agreement, the terms of which have been approved and ordered by the High Court,” according to a statement provided to CNN by the former couple’s spokesman, Gerard Franklin.

“Whilst this is a sad day for Peter and Autumn, they continue to put the wellbeing and upbringing of their wonderful daughters Savannah and Isla first and foremost.”

The pair announced their intention to divorce in February last year, after agreeing to separate the year before. Peter is the son of Princess Anne — the Queen and Prince Philip’s daughter — and Mark Phillips. He is the older brother of Olympic equestrian Zara Tindall.

FROM THE ROYAL VAULT

For only the second time in her 69-year reign, the Queen has missed the first day of the Royal Ascot horse race meeting. The racing festival is one of the highlights of Britain’s social calendar. It’s also said to be one of the Queen’s favorite fixtures in her diary — so much so that she writes a message in the five-day event’s program for racegoers every year. Last year, the Queen missed out entirely on Ascot, when the meet was held without spectators amid the escalating pandemic. This year, the Queen instead met in-person with Australian leader Scott Morrison on Tuesday.

Wondering why it matters that Elizabeth couldn’t make it? Well, in her role as head of nation, the Queen needs to be part of the rhythm of British life. Ascot is one of those usually immovable events where we expect to see her, as we do when she opens a new Parliament or at Christmas for her annual message. When she doesn’t appear as expected, it can feel unsettling.

In normal times, at 2 p.m. sharp on each day of the meet, the Queen undertakes the Royal Procession in a horse-drawn carriage to the racecourse’s Parade Ring. She would usually be accompanied by royal family members in the four-seat vehicle and it is a chance for racegoers to get a glimpse of the monarch.

The Queen’s racing manager, John Warren, confirmed the monarch’s absence, telling the BBC’s Today radio show: “Obviously the Queen would love to attend, as you know she’s fanatic about racing, watching racing and breeding horses, and has been going to Ascot all of her adult life.

“So, it’s a shame to miss an event. The plan at the moment is to see how it goes towards the latter part of the week and if the Queen’s able to come because she’s got runners, then, fingers crossed, it will happen.”

Warren said the monarch has a “deep fascination” with the breeding of horses and will be keeping across all the races by reading the Racing Post newspaper each morning. “It’s a deep fascination or a very broad escapism for all the other things that the Queen has to deal with in her life,” he explained.

PHOTOS OF THE WEEK

Royal Ascot usually hosts more than 300,000 visitors at its location in Berkshire, England. The event was founded by Queen Anne in 1711 and has been regularly frequented by members of the royal family ever since. This year will be a bit different, with attendance capped at 12,000 people as part of pandemic measures.

While the Queen wasn’t in attendance on the first day this year, several other royals were able to enjoy the races, including Charles and Camilla, Prince Edward and Sophie, Countess of Wessex, Princess Anne and Zara and Mike Tindall.

The royal presence at Ascot has meant those who wish to cheer at the sidelines must stick to strict sartorial codes. In recent years, hats — mandatory for attendance — have become a conduit for creative expression. Read more on the fashion on display as this year’s event kicked off.

“The fight against this terrible pandemic provides, if ever one was needed, a crystal-clear example of the scale, and sheer speed, at which the global community can tackle crises when we combine political will with business ingenuity and public mobilization. Ladies and gentlemen, we are doing it for the pandemic, so if you don’t mind me saying so, we must also do it for the planet.”

Prince Charles called on the international community to unite to tackle the climate crisis in a speech at the G7 summit in Cornwall, England.