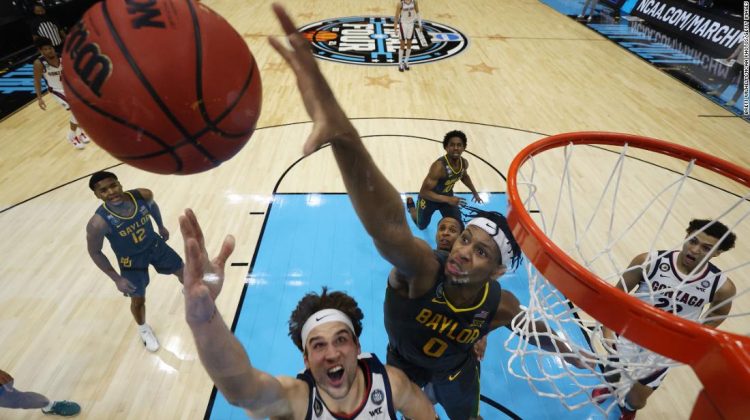 The case affirmed lower court rulings and further chipped away at the National Collegiate Athletic Association’s power over the athletes who drive its revenue.

College athletics rake in billions of dollars through sales of tickets and merchandise plus lucrative TV contracts for high-profile sports like football and basketball. But the NCAA has long argued that restrictions on student athletes are necessary to ensure they maintain amateur status and don’t blur the line between college and professional sports.

The narrative is changing. We talked to some experts on what this new ruling means for student athletes and the future of college sports.

The Supreme Court decision Monday was narrowly tailored around a case brought by a former West Virginia running back, Shawne Alston, and other players.

The ruling will allow the athletes to receive education-related benefits such as graduate school tuition, study abroad opportunities, computers, tutoring, vocational school and achievement awards for their academic progress.

But experts said it could also benefit student athletes by paving the way for more lucrative opportunities.

Its impact will reverberate for years, one scholar said.

“In the short term, the ruling will prevent the NCAA from limiting education-related benefits. In the medium and long terms, the NCAA’s prized ‘amateurism’ defense is riddled with body blows,” said Michael A. Carrier, a professor at Rutgers Law School.

Look no further than the blistering opinion by Supreme Court Justice Brett Kavanaugh, who accused the NCAA of acting “above the law” in how it treats athletes and questioned why the profits generated by college sports flow to everyone except the players themselves.

Experts said that lawyers weighing future litigation against the NCAA over similar issues will be taking notes.

“The Supreme Court made it crystal clear that the traditional form of antitrust analysis known as the rule of reason applies to the NCAA, which is not immune from scrutiny,” Carrier said. “And Justice Kavanaugh raised significant concern about restraints even beyond the ones at issue in this case. It would not be a surprise to see future plaintiffs including direct quotes from his opinion.”

Kirsten Hextrum, an assistant professor at the University of Oklahoma, said the Supreme Court’s ruling comes with a lot of fine print.
For starters, lawsuits originally challenged the NCAA’s right to restrict all forms of athletes’ compensation — including those unrelated to education, said Hextrum, a former NCAA national champion rower and author of an upcoming book, “Special Admission: How College Athletic Recruitment Favors White Suburban Athletes.”

This week’s ruling removes the NCAA’s right to limit what constitutes an athletic scholarship, allowing college athletes to receive money for school and educational supplies, such as computers.

“Whether schools in general will offer such rewards, and which ones will have the funding to do so, remain open questions,” Hextrum said.

But the Supreme Court only weighed in on education-related benefits, which leaves intact a lot of restrictions against compensating student athletes, Hextrum said.

“The Supreme Court upheld the NCAA’s general right to pass and enforce amateur rules,” Hextrum said. “Such a ruling preserves the NCAA’s power to monitor and dictate nearly every aspect of college athletes’ lives, from where they can and cannot work, to their academic degree progress, to their dietary intake.

“Most of all, the Supreme Court upheld the NCAA’s right to restrict direct monetary rewards for athletes.”

In a statement on Monday, the NCAA said the ruling “reaffirms the NCAA’s authority to adopt reasonable rules and repeatedly notes that the NCAA remains free to articulate what are and are not truly educational benefits.”

The decision could be a boost for student athletes of color

A majority of NCAA student athletes — roughtly 56% — identify as White. But most of the star players in the two major revenue-generating sports — football and men’s basketball — are Black and brown, said Moore, the Grand Valley State University professor.
A recent study of the economics of college sports found that affluent White students are profiting off the labor of poor Black students. The study published last year found that the money generated by football and basketball programs pays for the salaries of coaches and administrators, helps upgrade facilities and finances less popular sports played mostly by affluent White student athletes.

“They (minority student athletes) are the ones who are making the NCAA and the institutions the bulk of the money in sports,” Moore said.

Jeffrey Kessler, a lawyer for a group of men’s and women’s basketball players behind the lawsuit against the NCAA, told CNN’s Victor Blackwell that the Supreme Court ruling will be a financial boost to minority college athletes.

“Many of these athletes are people of color. They come from communities where the opportunity to earn some of this revenue … (is) critical,” he said.

But Hextrum, the Oklahoma professor, said that while the ruling may bring more opportunities for Black and brown college athletes, it’s still not enough.

“Such a change is far from the necessary rights and compensations needed to upend the racially exploitative system underpinning college athletes,” she said. ” Athletes are no closer to receiving labor rights — like workers compensation for an injury or collective bargaining power — rights needed to erode the power wielded by universities and the NCAA.”

“What really needs to be reformed is the continued economic exploitation,” he said. “The extended benefits are great. But there’s still the issue of this being a multibillion-dollar industry that doesn’t pay the players.”

But it’s less impactful than college athletes’ efforts to monetize their names, image and likeness

For star college athletes, a boost in education-related benefits is not as potentially lucrative as the chance to earn income from the use of their name, image and likeness — known as NIL — experts say.

In a surprising reversal, the NCAA Board of Governors voted in October 2019 to allow student athletes — some of whom are regional or national celebrities — to use their name, image and likeness to make money by signing endorsement deals or making personal appearances.

But almost two years later, it remains unclear how this will work.

A handful of states have laws going into effect July 1 that will allow NCAA athletes to begin earning NIL revenue. Other states have passed similar laws that will take effect in the coming years.

But the NCAA has said it would prefer to see Congress pass federal guidelines governing student athletes’ NIL compensation.

“It is critical that college sports are regulated at a national level. This ensures the uniformity of rules and a level playing field for student-athletes,” the NCAA said in a statement last month.

“Some of these (state) laws allow for nearly unregulated use of NIL by student-athletes, while other bills under consideration would erode the NCAA’s ability to maintain the collegiate model even further, undermining the NCAA’s model of amateur intercollegiate athletics and threatening to transform student-athletes into paid professional employees of their schools.

But any NIL laws will come with more fine print, Hextrum said. For instance, California’s NIL law will give the NCAA and universities the authority to restrict which contracts an athlete can sign to avoid undermining existing business relationships.

“If a California school has a Nike contract stating that all athletes must wear Nike gear, a school could block a track athlete from signing an endorsement deal with Brooks running shoes,” Hextrum said.

Moore believes that even with these caveats, an umbrella law allowing college athletes to earn NIL revenue is more beneficial than education-related benefits.

“Any model where some of the (NCAA’s) revenue has to be shared, or where they can finally capitalize on their NIL, is great,” he said. “This can be life-changing for a young college kid.”