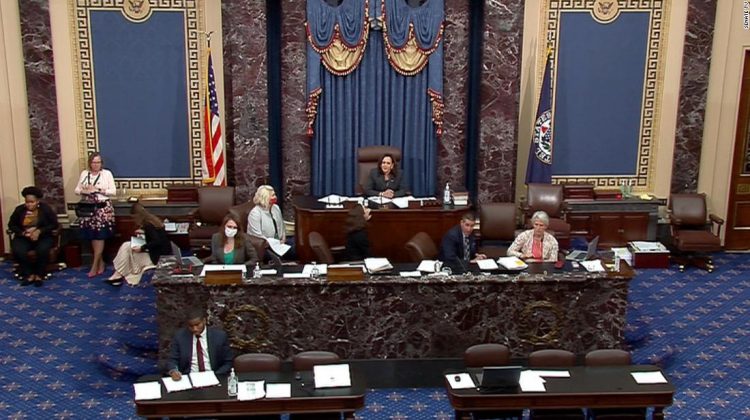 In the US Senate, it was a show vote that fell along party lines on a step that would technically have opened debate on the issue of voting rights.

The irony of the filibuster, a delaying tactic meant to keep debate going as long as necessary, is that in today’s Washington it functionally means there’s no real debate on much of anything on the Senate floor.

So we have not the world’s greatest deliberative body but rather a great barricade to major legislation, which is exactly what Senate Minority Leader Mitch McConnell wants.

“The Senate is only an obstacle when the policy is flawed and the process is rotten,” he said, pledging a GOP united against the voting rights legislation. “And that’s exactly why this body exists. Today, the Senate’s going to fulfill our founding purpose, stop the partisan power grab.”

The legislation would have done a great many things with the intention of making it easier and more streamlined for more Americans to vote, which is also the opposite of the current GOP platform.

Fact check: Breaking down 10 claims about the Democrats’ elections bill

While Democrats want more national standards in voting, Republicans are working hard at the state level to make it ever so slightly more difficult, hoping to lop off enough votes at the margins to take back the House and Senate in 2022.

There is one simple reason Republicans can use majorities in state legislatures to curb voting access while Democrats can’t use their majorities in Washington to open it up. And that reason is the filibuster, which does not exist at the state level in the ironclad form that has locked up the Senate.

Somewhere in the middle of all of this is Sen. Joe Manchin, the conservative Democrat from very red West Virginia. He wants the parties to come together and debate, and this show vote — proving the parties won’t work together on a key issue — could have been a moment of conversion for him.

A Manchin-style compromise would probably strike most Americans as pretty fair.

According to CNN’s report, he’s “said he’s open to backing several of the provisions in the so-called For the People Act, including declaring Election Day a public holiday, expanding early voting to at least 15 consecutive days and banning partisan gerrymandering.”

But he’s also approving of a GOP priority:

“In return for his crucial support, Manchin wants to require identification to vote, which many progressives view as discriminatory toward racial minorities but which Republicans see as essential to deterring potential voter fraud.”

Who needs a voice? Washington, DC, Mayor Muriel Bowser got into a heated exchange on Capitol Hill with Republican Sen. Ron Johnson, who sits on the Senate Homeland Security committee, on the issue of DC statehood, which most Democrats support but also has zero chance of becoming law.

Johnson argued statehood is unnecessary for DC residents, because “In the end, people choose to live here” and “individuals who are within the District obviously have a vested interest in a very powerful federal government, which is counter to the power vested in the states.”

Bowser countered: “Seven hundred thousand people — hardworking individuals who educate their children, start businesses and work in the District. … It would be incorrect to say that DC residents have more of an interest in the federal government than other Americans.”

What voters want. Most Americans — 71% — want easier access to earlier voting, which is what Democrats are pushing.

Even more Americans — 80% — support requiring an ID to vote, which Republicans could do in this legislation if they bought in.

Manchin has a point that lawmakers should work together for good legislation that people support. He’s among the few people who think they’re capable of doing it in the current environment.

Change can be confusing. New Yorkers, from the news reports I saw, seemed a little flummoxed by their new ranked choice voting Democratic primary.

In short, a voter selects a top choice and then ranks other candidates in order of preference. If nobody gets 50% on the first round of counting, the bottom vote-getters are taken out of the counting and second choices for those candidates are added in. The process repeats until one candidate gets 50%.

Good-government groups argue that it cuts down on spoilers and surprises and lets people prioritize.

New York City will be the largest US jurisdiction to use the system, which is already in place in a number of smaller liberal cities and in the state of Maine, which has a population a fraction the size of New York City’s.

It’s an interesting thought experiment to wonder if Donald Trump in 2016 (or Joe Biden in 2020, for that matter) would have won their respective primaries in a ranked choice voting environment. Crowded primaries rarely result in a winner who gets a majority of the vote. Current New York Mayor Bill de Blasio got just over 40% in 2013, for instance. That primary would have required the counting of second choices.

What else? Watch the Manhattan DA race. That could be the person who prosecutes Trump or his business associates.