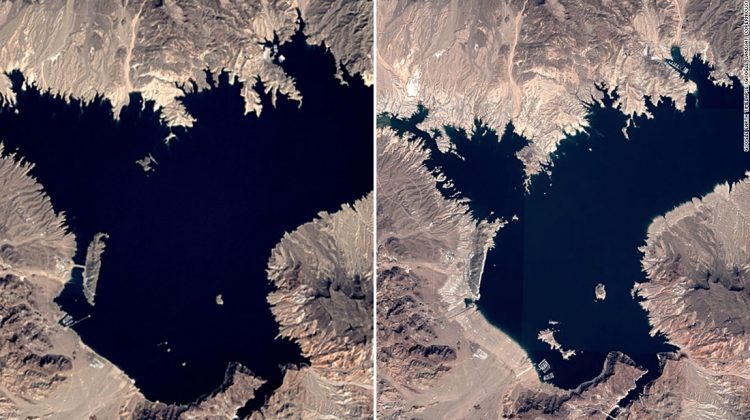 Later this year, the US government will almost certainly declare the first-ever water shortage along the Colorado River. Maps show more than a quarter of the US is in “exceptional drought,” underscoring the scope of a decades-long dry-out.

Stories are popping up across the West of possible rationing, coming restrictions and looming standoffs between farmers and the government over the most precious natural resource.

Restrictions. States like Arizona and Nevada are almost guaranteed to have their water allotment from the Colorado River cut back, which through a complicated drought contingency tier system agreed to by states in 2019 will affect farmers first. But the warning signs are there for urban areas and surrounding states to conserve and evolve.

Standoff. To the north, there’s a sharp disagreement in Oregon between farmers cut off from water to irrigate their potatoes and federal officials trying to save an endangered species of fish.

When CNN’s Lucy Kafanov reported from the Klamath Basin last week, she did her live shot from the parched bottom of a lake that should be feet deep.

The farmers set up shop in a tent outside the canal headgate and were all but threatening to break in and open the gates themselves, like they did 20 years ago.

The most visible and striking effect of the heat and drought is at Lake Mead, which is at its lowest levels since it was filled during construction of the Hoover Dam in the 1930s.

Less snowpack and more evaporation from hot temperatures have taken their toll over the course of decades to the point where its dropped more than 140 feet since 2000 and sits at not much more than a third of its capacity.

Now for an aside on the Hoover Dam, government spending and climate change.

The dam: Talk about an infrastructure project! President Joe Biden came to office promising a New Deal-level investment in infrastructure. That’ll be pared back by three quarters if he’s to get any Republican help passing it,

Government spending: The latest bipartisan proposal includes $5 billion to help address the Western water shortage, although larger pots of money are meant to improve water and power infrastructure; the dam, with less water behind it, is producing less energy.

Climate change: But while lawmakers are happy to find a way to spend money on infrastructure as long as they don’t raise taxes, there’s zero agreement with Republicans to do anything directly about climate change, which is helping this drought along. Democrats may try to go it alone and pass a much larger infrastructure bill that seeks to address climate change, but it’s not clear they’ll have the votes.

Long time coming. The water at Lake Mead has been slowly falling for years. In 2015, CNN went to see St. Thomas, a former town of 500 people that was bought out by the government and submerged under 60 feet of water for the sake of Lake Mead. St. Thomas emerged from the depths as the water lowered. And kept lowering.

Remember, 40 million people living across seven Western states and Mexico get their water from the Colorado River system.

The entire West is dry. CNN’s climate team put together three maps to bring perspective to the historic drought.

The current drought map shows the 88% of the Western part of the country in some shade of red and the East almost entirely unfazed.

The upcoming rainfall outlook is just as grim, suggesting there will be no relief out West. And a look at stream and river flow demonstrates a lack of water moving across the region.

They could have added a fourth with this heat map as the West bakes in record temperatures.

Decades of drought. The Intermountain West — between the Rockies, the Cascades and the Sierra Nevada Mountains — has technically been in a drought for decades, since 2000. It’s a vicious cycle: Hot weather leads to drought, and drought leads to hot weather.

What makes a drought “exceptional?” It’s interesting to look at what goes into these maps, which are quite alarming with all the deep red. The data is maintained by the University of Nebraska-Lincoln in partnership with government agencies. They have very specific criteria that’s unique to each state for delineating between “extreme drought” and “exceptional drought.”

The criteria they list for “exceptional drought” in California is not far from apocalyptic:

We know the short-term effects of this drought will be restrictions and new rules. What’s harder to see is the longer-term effects, although it’s a broader look at water and drought that makes the dire predictions of climate refugees fleeing parts of the country that become too hot or arid, or the breakdown of water sharing systems and agreements.

That seems both a long way off as humans turn their attention toward using less water and finding new ways to capture it, store it and reuse it. But those far-fetched predictions seem all too close when the nation’s largest reservoir is literally drying up.