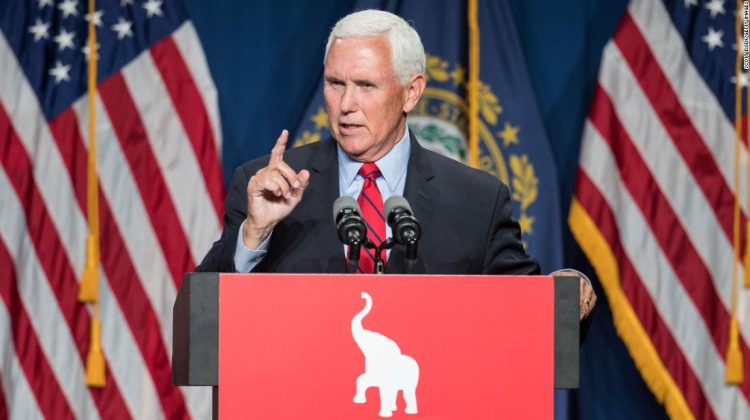 Speaking to the Ronald Reagan Presidential Library in California, the former vice president did everything he could to talk about the accomplishments of the “Trump-Pence” administration on everything from immigration to trade to foreign policy.

“President Donald Trump is also one of a kind,” Pence said at one point. “He, too, disrupted the status quo. He challenged the establishment. He invigorated our movement, and he set a bold new course for America in the 21st century. And now, as then, there is no going back.”

Except that, on the one thing Trump cares the most about — his fantasy that the 2020 election was stolen from him — Pence continued to defend his own unwillingness to overturn the election during the certification process on January 6.

“Now, there are those in our party who believe that in my position as presiding officer over the joint session, that I possessed the authority to reject or return electoral votes certified by states,” Pence said. “But the Constitution provides the vice president with no such authority before the joint session of Congress. And the truth is, there’s almost no idea more un-American than the notion that any one person could choose the American president.”

Which is the only part of Pence’s speech that Trump — or his most ardent fans — will care about. Which means that all of Pence’s attempts to link himself to Trump’s accomplishments (and the former president personally) will be for absolutely naught.

Trump has repeatedly attacked Pence for not blocking the certification of the Electoral College results on January 6; “Mike Pence didn’t have the courage to do what should have been done to protect our Country and our Constitution,” Trump tweeted in the immediate aftermath of the certification as rioters gathered near the US Capitol. (Pence was not, in fact, empowered in any way, shape or form to influence the certification.)

Some of those same rioters — hours later — were chanting “Hang Mike Pence” as they steamrolled through the Capitol building — even as a gallows was being constructed outside.

For Trump, Pence’s unwillingness to break the law to overturn the election erased all of the good things the vice president had done for him over the past four years. Which is a remarkable erasure, given that there was no more loyal ally for Trump than Pence — seemingly at the President’s side for, well, everything.

Pence, in this speech and a few others he has delivered since emerging after the January 6 debacle, appears to be walking an impossibly fine line. He wants to be Trump’s legislative heir. But he also knows he can’t rewrite history on his role on January 6. Nor can he make Trump like him again.

So, Pence’s case in 2024 — and, to be clear, he’s planning to run — is that he is Donald Trump, without the full-on election denial that sparked January 6.

Which, really, isn’t a thing. Because Trumpism isn’t really about policies. It’s about tone and feel. And at least now, about fighting the facts on the 2020 election.

It’s like saying that you love baseball, except for the pitching part. Or that you love Italian food — just not spaghetti or lasagna. There’s not one without the other.

Trump has so fused his personality (and his following) with election rejection that there is no space for someone like Pence to embrace the policy end of Trumpism, such as it exists, but reject the core passion of the former President and his movement.

Pence will keep trying, of course. But he’s literally in an impossible political situation.