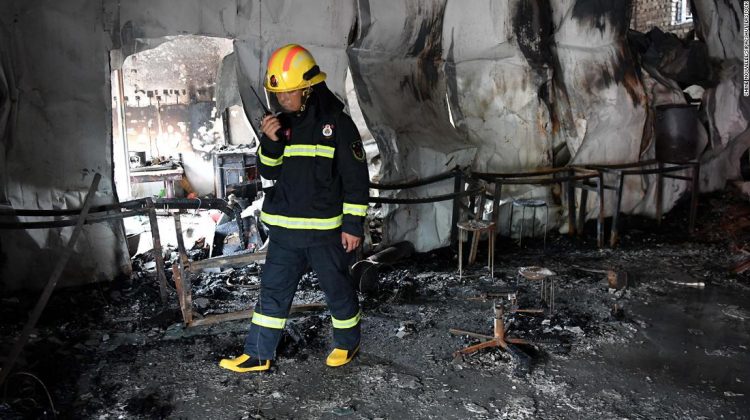 The partial collapse of a residential building in Surfside, Florida has garnered widespread attention in China, where images of rescue workers combing through the debris have featured prominently on state media and nightly news programs.

But amid the intense focus on the unfolding tragedy in the United States, many Chinese internet users have questioned why a deadly incident at home has received such minimal media coverage and so little attention on social media.

In the early hours of Friday, a fire tore through a martial arts school in central Henan province, killing 18 students — mostly children — and injuring 16 others, according to a local government statement and state media reports.

Such loss of life would, under normal circumstances, be a major tragedy that both shocks and saddens the nation, dominating news headlines and social media for days.

But with the Communist Party’s all-important centenary just days away, such harrowing news is the last thing the party’s propaganda apparatus wants to highlight — at least not when it occurs inside of China.

On Weibo, China’s heavily censored version of Twitter, users left angry comments asking why the fire wasn’t ranked in the top 50 trending topics of the day, with some accusing censors of suppressing discussion and preventing the news from gaining traction.
“Why didn’t an incident with such a high number of casualties become a trending topic? Is it because the party’s 100th anniversary doesn’t allow negative news?” one user asked.

On state media too, coverage of the fire was also limited, with most outlets sharing a few syndicated news stories that drew mostly from official statements provided by local authorities.

Many pointed out the contrast with the extensive and highly emotive coverage of the condo collapse near Miami, which had been a top trending topic on Weibo for days.

The comparative silence surrounding the fire speaks to the intensive and widespread control exercised by government censors in the lead-up to the 100th anniversary of the founding of the Communist Party, which falls on July 1.

In the past, Chinese authorities have regularly doubled down on “stability maintenance” before major anniversaries, swiftly censoring voices and suppressing incidents deemed in discord with the “positive energy” ahead of celebrations.

But the level of caution for the centenary has reached new heights.

Two weeks before the anniversary, Chinese officials held a high-level meeting and vowed to “spare no effort to ensure production safety, firmly ward off accidents of various kinds, and create a safe and stable atmosphere for the celebration of the 100th anniversary” of the party’s founding.

As a result, local authorities are on edge, with some going as far as temporarily halting risky industries.

In Hubei, all coal mining operations were reportedly suspended from June 15 to July 5 after a gas pipeline explosion killed 25 people on June 13. In neighboring Jiangxi province, five coal mines were closed from June 21 to July 4, according to Bloomberg.

With harmony ensured at home, the disaster in Florida, on the other hand, gives China’s propagandists an opportunity to double down on the image of a US in decline.

In a column headlined “After condo collapse in Miami, will US fix crumbling accountability of officials?” Hu Xijin, editor-in-chief of the state-run Global Times, said the disaster showed “the US’ rescue capability with emergency situations is much worse than people think.”

Tesla’s bad run in China is getting a whole lot worse.

Elon Musk’s electric carmaker on Saturday began recalling more than 285,000 vehicles in the country over a safety risk. Chinese regulators said that the cruise control system in some models can be activated when drivers try to shift gears or accidentally touch the gear selector, resulting in accidental acceleration.

Tesla apologized for the recall on Saturday, adding in a statement that it will “strictly follow national regulations and keep improving our safety protection.”

But it’s not a good look for the company, which was already grappling with a rough year in China. The company was recently the target of a protest at China’s largest auto show in Shanghai by Tesla owners who complained about problems with their cars. Regulatory agencies have also questioned the quality of Tesla’s Shanghai-made Model 3s, and there have been reports of tensions between China’s military and the company.

Daniel Ives, a managing director of equity research at Wedbush Securities, called the incident a clear “black eye moment” for Tesla after all the negative publicity the company had recently faced.

But “we believe this situation overall is a bump in the road and does not derail the near-term or long-term bull thesis for Tesla China,” he wrote in a note to clients Sunday. “However, going forward it needs to be a smoother road on autopilot safety, otherwise the PR black cloud will continue.”

— — By Philip Wang and Michelle Toh