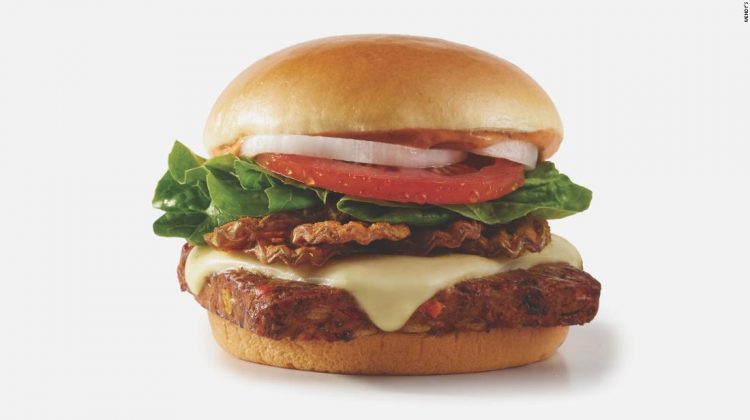 Beginning June 28, the fast food chain is selling a new “Spicy Black Bean Burger” in three US cities, including Jacksonville, Pittsburgh and Columbus, Ohio. The sandwich costs $5.79 and will be on menus for a limited time.

Wendy’s (WEN) knocked its main rival, McDonald’s (MCD), in a statement, saying “certain plant-based creations have spawned a bland reputation for the category — looking at you McImpossible — but luckily, Wendy’s has spice in her DNA.”

The sandwich certainly lives up to that because it features a black bean patty seasoned with paprika and chipotle pepper, topped with crunchy chipotle jalapenos and a smoky chipotle sauce plus a piece of melted pepper jack cheese.

Spice is a way Wendy’s differentiates itself. Earlier this year, it added a new chicken sandwich covered in jalapeños and a fried chicken salad topped with a creamy jalapeño ranch dressing. A new “Ghost Pepper Ranch” dipping sauce for its chicken nuggets will be sold nationwide beginning on July 12.

“Consumers are looking for flavor, and unfortunately there’s boring and bland options out there from our competition,” Wendy’s Chief Marketing Officer Carl Loredo told CNN Business in February. “They are hyper-focused on flavor and it’s something they want and need right now.”

Plant-based alternatives are also continuing to grow in popularity. Burger King sells the Impossible Whopper and McDonald’s is soon rolling out a McPlant sandwich that uses Beyond Meat. Yum Brands (YUM), which owns KFC, Taco Bell and Pizza Hut, also recently struck a deal with Beyond Meat (BYND) to bring new plant-based items to its chains.
Taco Bell said Wednesday it made a new shell that uses a “pea protein-based proprietary blend” for its Naked Chalupa. The creation is being sold at only one location, which is in Irvine, California, until June 27.