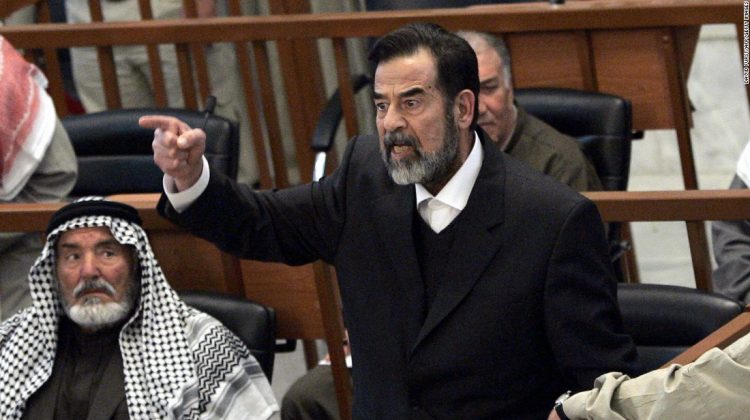 President Joe Biden made history last week by endorsing a bill by Rep. Barbara Lee (D-California) to repeal the 2002 law that enabled war against Saddam Hussein’s regime in Iraq. The House quickly followed suit by passing the Lee bill 268-161, with a whopping 49 Republican votes.
In theory, repealing the 2002 Authorization for Use of Military Force (AUMF) against Iraq should be easy. The war ended in 2011, and the law that authorized it is not needed for any current operations. All ongoing military operations carried out in the Middle East — and around the world — in the name of the Global War on Terror fall under a different law, the 2001 AUMF passed in the wake of the 9/11 attacks.
While Article I of the Constitution grants Congress authority to declare war, successive presidents have circumvented this prerequisite by claiming that the 2001 and 2002 AUMFs provide legal justification for targeting groups and even foreign nations that Congress never authorized.
The US strike that killed Iranian Gen. Qasem Soleimani, ordered by former President Donald Trump, was just the latest in this precarious 21st century trend of the executive branch repurposing increasingly anachronistic war authorizations to expand presidential war-making. The Trump administration’s gross misapplication of the Iraq AUMF exemplifies the problem with leaving it on the books.
In March, the House Foreign Affairs Committee advanced Rep. Lee’s bill to revoke the Iraq AUMF on a bipartisan basis. Even those who voted against advancing the measure expressed agreement that the 19-year-old law had outlived its purpose and merited repeal.

Their quarrel was one of process, arguing for a broader reform effort, which simultaneously addressed both the Iraq and 2001 AUMFs, replacing them with updated versions. As the committee’s lead Republican, Rep. Michael McCaul (R-Texas), said, “I think we all agree we’ve abdicated our Article I responsibilities, and we need to look at updating these very old authorized uses of military force.”

Rep. McCaul cannot be faulted for seeking to also tackle the 2001 AUMF, which has been stretched far beyond its stated purpose of authorizing force against those responsible for the 9/11 attacks and those who harbored them.
Indeed, the 2001 AUMF, which was passed during the presidency of George W. Bush, has been used by successive presidents Barack Obama and Donald Trump to target an array of groups across the globe — including to conduct combat operations in eight countries, according to the research group Costs of War, and dozens of military operations in at least 18 countries, according to the Congressional Research Service.
However, it’s worth recalling that there have already been numerous efforts in Congress over many years to deal with both the 2001 and Iraq AUMFs at the same time, all of which have resulted in neither authorization being repealed or even revised. If we have learned anything from this all-or-nothing approach, it is that starting big does not seem to be the best option.

The more that Congress does nothing in the face of dubious executive-branch claims of a “longstanding interpretation” of the Iraq AUMF — as the Trump administration put it, in its formal justification of the Soleimani strike — the more it will embolden presidents to either act in accordance with this view or, worse, broaden their interpretation and further exploit the AUMF by undertaking even more military actions that stray further from what Congress intended when it authorized war on Hussein’s Iraq in 2002.

For precedent, one need look no further than the history of operations conducted under the 2001 AUMF, which underpinned a global campaign that came to be known, during George W. Bush’s presidency, as the Global War on Terror.

Far too often, Congress gives an inch and the president takes a mile. This is much larger than one House vote on one-little used AUMF. This is a long-standing problem of a coequal branch of government being ignored. If Congress won’t defend its constitutional power, it may not — practically speaking — have it for very long.

Thankfully, Congress finally appears to have coalesced around the assessment that the Iraq AUMF is now ripe for repeal. Following on the heels of House passage of the Lee bill, the Senate Foreign Relations Committee is now poised to take up a bipartisan Senate bill, led by Sen. Tim Kaine (D-Virginia) and Todd Young (R-Indiana), that would repeal both the Iraq AUMF and the 1991 Gulf War AUMF. Senate Majority Leader Chuck Schumer has endorsed the measure and pledged a vote on the Senate floor.
Support among advocacy groups spanning the ideological spectrum is equally strong. In September 2020, the conservative Heritage Foundation said that the 2002 Iraq AUMF “has run its course … [and] should be repealed.”
This February, an ideologically diverse group of organizations wrote to both Congress and the Biden administration, also calling for the law’s removal. Veterans organizations ranging from VoteVets and Common Defense to Concerned Veterans for America and the American Legion have all expressed support for Rep. Lee’s bill.

With this increasing consensus, Congress has a real chance to begin reasserting its languishing war powers by repealing this outdated and dangerous war authorization. It should take it.