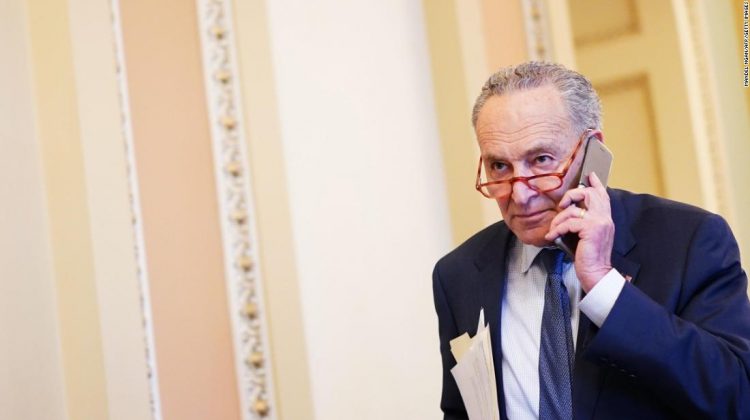 Democrats have set up a key test vote on the bill that they have pitched as a necessary counter to state-level efforts to restrict voting access, but Republicans have united against it, decrying it as a partisan power grab and a federal overreach into state voting and election systems. Democrats have also faced pushback over the legislation from a member of their own caucus: pivotal swing vote Sen. Joe Manchin of West Virginia.
Failure of the bill to move forward would be a major blow for Democrats that will likely trigger a fresh outpouring of calls from progressives to eliminate the legislative filibuster, which requires most bills to get the votes of at least 10 Republicans given the current Senate makeup. But the votes are not there to eliminate the filibuster with Manchin and several other moderate Democrats opposed.
The effort by Democrats to pass the voting legislation comes in the aftermath of former President Donald Trump’s “Big Lie” that the 2020 presidential election was stolen and as Republican-controlled legislatures have pressed ahead with new state laws imposing limits on voting. As of May, state legislators in 48 states had introduced more than 380 bills with restrictive voting provisions, according to a tally from the Brennan Center for Justice at New York University.
The Senate is taking up an amended version of legislation that passed the House in March.

Tuesday’s vote is a procedural motion on whether to begin debate on the legislation. It would need 60 votes to succeed, a threshold it is not expected to meet.

Republicans have been unified in opposing the legislation. Senate Democrats have lined up behind the bill with the exception of Manchin, who they are working hard to bring on board in the hope that they can put up a united front against Republicans and deprive them of the talking point that the bill has bipartisan opposition.

Manchin said on Monday evening that he did not yet know if he would vote to advance the bill as he was still negotiating changes with Democrats — and did not know if they would be agreed to yet.

“I got to see. I hope they make some changes or agree to some changes,” Manchin said when asked if he would vote to proceed to the legislation.

“I think we put out an awful lot of good changes, I think, hopefully, the country would agree … that makes a lot of sense for a lot of voters,” he said.

Manchin said earlier this month that he would vote against the bill, arguing that any major legislation related to voting and elections must have bipartisan support. But he has since left open the option that he could support a modified bill. The West Virginia Democrat released a proposal that would make Election Day a holiday, ban partisan gerrymandering, mandate at least 15 consecutive days of early voting and institute a voter ID requirement, among other provisions.

“As we speak, we are working to come up with an agreement to compromise with Joe Manchin,” Senate Majority Leader Chuck Schumer told reporters on Sunday.

Schumer gave an impassioned speech on the Senate floor Monday on the significance of voting rights ahead of Tuesday’s “crucial vote” on legislation to “protect Americans’ voting rights,” which he argued “are under assault from one end of the country to the other.”

But even if Manchin backs the legislation, it is virtually guaranteed to lack the GOP support to pass in the Senate.

Senate Minority Leader Mitch McConnell made clear on Monday afternoon that the legislation is destined to fail in the Senate, promising they will give it “no quarter.”

McConnell accused Democrats of trying to make election laws benefit their party, saying, “They’ve made it abundantly clear that the real driving force behind S1 is a desire to rig the rules of American elections permanently, permanently in Democrats’ favor,” rather than protecting the rights of voters.

McConnell last week threw cold water on Manchin’s proposal and indicated that he did not believe any Republican in the Senate would vote for it.

“There’s now a debate among Democrats over a revised version produced by one of the Democrats, ” McConnell said, before going on to call the proposal, “Equally unacceptable. Totally inappropriate.”

“All Republicans, I think, will oppose that as well,” he said.

Sen. Roy Blunt, a Republican from Missouri, told reporters on Monday that he believes Republicans will be 100% united against advancing the legislation.

“I expect we all vote against it,” Blunt said.

The legislative package that passed the House calls for far-reaching ethics and government changes that would impact Congress, the president and even the Supreme Court.

It would institute an ethics code for the US Supreme Court that would apply to justices and would implement measures intended to prevent presidential conflicts of interest.

It would stop lawmakers from using taxpayer money to reach settlements in employment discrimination cases stemming from their own actions.

The bill also takes aim at Citizens United, the landmark 2010 Supreme Court decision, by calling for a constitutional amendment to overturn the ruling, which opened the door to unlimited spending by corporations and unions to influence elections.