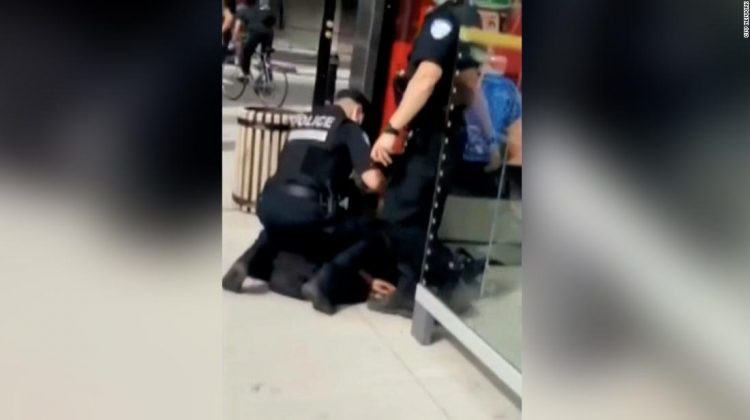 Frantz Benjamin, a member of the National Assembly of Quebec, said several constituents called him and told him the video evokes “collective trauma,” reminding them of George Floyd’s death with the knee of a Minneapolis police officer on his neck, CBC reported.

CNN’s calls to police have not been returned, but the CBC is reporting that officers were responding to a call from Georges Vanier Secondary School on June 10 about a fight involving more than a dozen students from various schools, a spokesperson for the Service de police de la Ville de Montréal (SPVM) told CBC. Police told Radio-Canada that two minors were charged with carrying weapons and an investigation is underway.

“If the use of force is not justified, the administration will take the required actions,” said SPVM spokesperson Insp. David Shane to Radio-Canada.

Shane said the officer who used the knee technique is continuing to work while the incident, which a passerby caught on video, is under review.

The mother of the teen in the video, who has not been named because he is a minor, says she questioned why police would hold her son to the ground by his neck.

“Is it because my son is Black?” she asked. “It’s not because we’re Black that we have to experience those kind of things. We’re humans. Poor child,” she told the CBC.

What the video shows

Video of the incident was obtained by Radio-Canada and shows about a minute and a half of the arrest.

It does not show what lead up to the intervention, and it begins and ends with officers restraining the teen, according to CBC.

At the start of the video, two officers can be seen kneeling on the suspect, one with his knee on the teenager’s lower back and the other with his knee on his neck and face, CBC reported. The teen doesn’t appear to be moving or saying anything.

While pinning the teen, the officer searches a bag and hands an object to his colleague. According to the CBC, police say the teen was being arrested for having a stun gun.

Before the camera starts recording, Shane told CBC, two teens refused to identify themselves to officers. And, he says bear repellent was found in his possession during a search.

When police found the repellent, the second teen appeared to panic, reached for something in his bag and pushed officers away, Shane told CBC. That is when police begin to restrain him and search for a weapon, police told CBC.

The police interaction with the other suspect is not captured in this video.

Tactic is not prohibited by SPVM

Montreal Mayor Valérie Plante is also asking the SPVM to clarify what happened, and Premier François Legault also commented on the incident, saying he “didn’t like seeing this photo.”

“I’ve asked that we check with the SPVM [to see] why this happened, and I would like for it to not happen again,” Legault said during a news conference on Friday, according to CBC.

The teen’s mother said her son is now afraid to leave the house and that she has sought help from the Maison D’Haiti, a cultural non-profit for the Haitian community.

Kneeling on a suspect’s neck is not prohibited by the SPVM, though using the technique to force a suspect to surrender has to be quick, Stéphane Wall, a former sergeant and training instructor, told the CBC.

Once the suspect is handcuffed, the knee should be moved more toward the shoulders, Wall said.