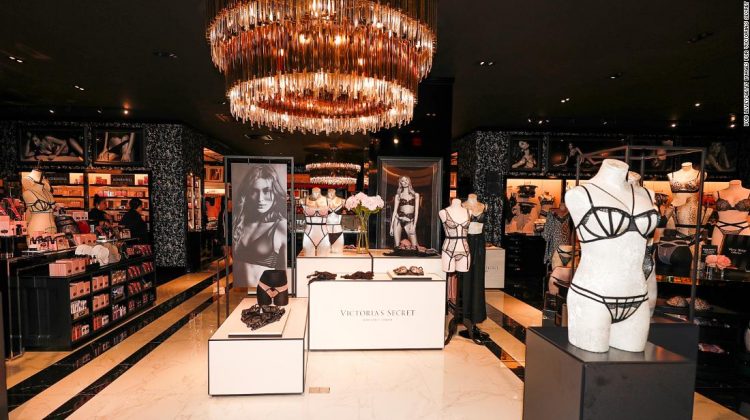 Sales and profits at Victoria’s Secret are growing, and L Brands is planning to spin off the intimate apparel brand into a separate public company in August. Victoria’s Secret’s improving performance and investor enthusiasm about its prospects as a standalone company have helped drive up shares of L Brands (LB) around 90% this year, making the stock one of the hottest performers on the S&P 500. And Victoria’s Secret is tapping a new group of women, including soccer star Megan Rapinoe, actress Priyanka Chopra Jonas and plus-size model Paloma Elsesser, to become public faces of the brand. They will also work on new product lines, develop content and support social causes on behalf of Victoria’s Secret.
The brand is now targeting mid-single digit percentage sales growth annually over the next three to five years. Retail analysts attribute Victoria’s Secret’s rebound to more inclusive marketing, a wider array of merchandise, fewer markdowns and moves to adapt to online shopping. The brand also closed more than 250 stores — a quarter of its stores in the United States and Canada last year — allowing it to shed some of its weaker performing locations.

“I think most people probably doubted their ability to recover after what was a really challenging three to four years,” said Janine Stitcher, a retail analyst at Jefferies. “But they’ve done it.”

Despite the turnaround, Victoria’s Secret still has work to do winning back consumers it lost in recent years and fending off upstart bra brands, say analysts.

“The future of Victoria’s Secret looks like more inclusive branding, which is going to be a long road for them,” said Erin Schmidt, a retail analyst at Coresight Research. “Inclusivity is not something that you can simply tack on to a product or to a marketing campaign. Consumers are demanding that they see that within the internal corporate structures and the supply chain.”

Cora Harrington, author of “In Intimate Detail: How to Choose, Wear & Love Lingerie” and founder of the blog The Lingerie Addict, said Victoria’s Secret needs to expand its bra and underwear sizes to appeal to a broader group of consumers.

Offering a range of sizes “makes people feel like there’s something there for them and encourages people to visit the site, shop the site and share things with their friends,” she said.

Harrington also noted that plus size models are still not featured as prominently in Victoria’s Secret marketing as competitors such as Rihanna’s Savage X Fenty brand.

“It’s interesting to see Victoria’s Secret pick up little bits and pieces of where the industry is moving, but somehow still be reluctant to go all in in some pretty significant ways,” she said.

Victoria’s Secret did not respond to request for comment on Harrington’s criticisms.

What went wrong at Victoria’s Secret

Although marketing trends in lingerie changed, Victoria’s Secret mostly stuck to the same playbook that helped it dominate the industry for years: push-up bras and scantily-clad celebrity models, long known as its “Angels.”

“It was all push-up bras that were made for not necessarily what women want to wear, but made for what [Victoria’s Secret] thought men would want,” said Stitcher from Jefferies.

“They were just kind of stuck with the same marketing message that they had for years. And that didn’t really resonate anymore,” Stitcher said.

In 2018, Ed Razek, the chief marketing officer for L Brands, faced backlash for an interview in which he stated he didn’t think the brand’s annual Angels fashion show, which debuted in 1995, should include “transsexuals.”

“Why not? Because the show is a fantasy,” Razek said. Razek later apologized for his “insensitive” comments. He left the company in 2019.

Leslie Wexner, the founder and CEO of L Brands who stepped down last year, dominated headlines for his ties to disgraced financier Jeffrey Epstein. Epstein was Wexner’s former money manager. Epstein was indicted on sex trafficking charges in July 2019, and later died by suicide in jail.

In stores, Victoria’s Secret had also relied on heavy promotions to draw customers and clear out unsold bras and underwear sitting on shelves, hitting profit margins. “The inventory got too high and the pricing completely collapsed,” said Stitcher.

More recently, Victoria’s Secret has been shifting its marketing, and it’s paying off, say analysts.

In 2019, the company ended its Angels fashion show after falling ratings and criticism of the event. It also featured its first plus-size and transgender models in 2019.

This repositioning was a dramatic departure for Victoria’s Secret and it’s taken time to shift consumer perceptions, said Coresight’s Schmidt.

“For a brand that has had its challenges both within the internal part of the organization and externally, this is a tremendous change for the consumer,” she said.

Victoria’s Secret has also expanded its bra assortment, said Stitcher. It’s selling more bralettes and unwired bras instead of push-up bras, and it’s offering fewer markdowns. Victoria’s Secret’s profit margin was up more than 10 percentage points during the three months ending May 1 this year compared with the same period in 2019.

“They’ve been promoting much more minimally. Pricing is back to where it was before they started to spiral downwards,” Stitcher said.

The brand is also navigating the shift to online shopping. In 2018, digital sales made up 24% of Victoria’s Secret’s revenue. Now, they make up 44%.

“The business has gotten much better than anyone would have expected,” she said.