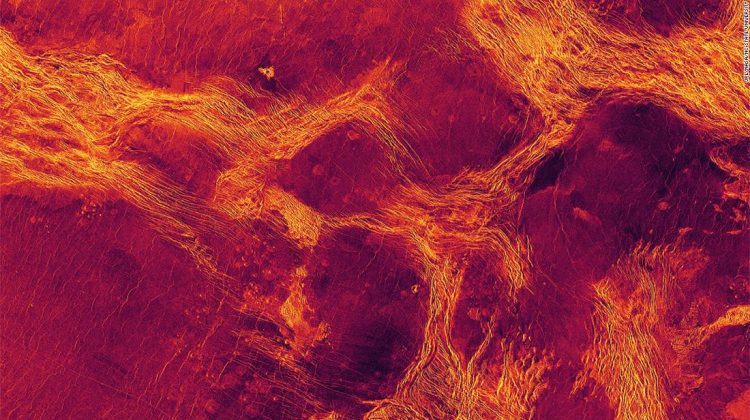 New research, however, suggests the planet could still be geologically active.

And the kind of activity taking place on Venus could provide scientists with a better idea of what’s happening on planets outside of our solar system — as well as what took place on early Earth.

A new analysis of radar images taken by NASA’s Magellan mission, which mapped the surface of Venus in the early 1990s, revealed evidence of tectonic motion. This motion on the Venusian surface looks like blocks of crust that have moved against one another, much like broken chunks of pack ice. Pack ice are the large pieces of floating ice that can be seen in a mass together in polar seas, like the waters around Antarctica.

The study published Monday in the journal Proceedings of the National Academy of Sciences.

“We’ve identified a previously unrecognized pattern of tectonic deformation on Venus, one that is driven by interior motion just like on Earth,” said Paul Byrne, lead study author and associate professor of planetary science at North Carolina State University, in a statement.

“Although different from the tectonics we currently see on Earth, it is still evidence of interior motion being expressed at the planet’s surface,” Bryne said.

Previously, scientists believed Venus had an immovable solid outer shell, called a lithosphere, similar to Mars or our moon.

Earth is unique because its lithosphere is broken, forming tectonic plates that move against, apart or underneath one another on top of a hot mantle.

When Byrne and his fellow researchers studied the Magellan images taken of the Venusian lowlands, which make up the bulk of Venus’ surface, they saw areas where large pieces of the lithosphere appeared to have moved. The blocks had pulled apart, pushed together, slid past each other and rotated — much like broken pack ice.

The researchers modeled this surface deformation and determined that these tectonics actually match the slow movement of the planet’s interior.

“These observations tell us that interior motion is driving surface deformation on Venus, in a similar way to what happens on Earth,” Byrne said. “Plate tectonics on Earth are driven by convection in the mantle. The mantle is hot or cold in different places, it moves, and some of that motion transfers to Earth’s surface in the form of plate movement. A variation on that theme seems to be playing out on Venus as well.

“It’s not plate tectonics like on Earth — there aren’t huge mountain ranges being created here, or giant subduction systems — but it is evidence of deformation due to interior mantle flow, which hasn’t been demonstrated on a global scale before,” Byrne said.

The movement and deformation of the crustal blocks also points to something else: Venus is likely still geologically active today.

“We know that much of Venus has been volcanically resurfaced over time, so some parts of the planet might be really young, geologically speaking,” Byrne said. “But several of the jostling blocks have formed in and deformed these young lava plains, which means that the lithosphere fragmented after those plains were laid down. This gives us reason to think that some of these blocks may have moved geologically very recently — perhaps even up to today.”

Future missions to Venus could shed more light on this, given that the Magellan data is from the 1990s.

By studying this pack ice pattern on Venus, researchers could use it to study exoplanets outside of our solar system and even the tectonics that were active on early Earth.

“The thickness of a planet’s lithosphere depends mainly upon how hot it is, both in the interior and on the surface,” Byrne said. “Heat flow from the young Earth’s interior was up to three times greater than it is now, so its lithosphere may have been similar to what we see on Venus today: not thick enough to form plates that subduct, but thick enough to have fragmented into blocks that pushed, pulled, and jostled.”

Although it’s been decades since NASA sent a mission to Venus, our closest planetary neighbor will be a hub of activity later in a few years. Three missions from NASA and the European Space Agency, all announced this month, will observe the planet in high definition.

Venus may have been the first habitable world in our solar system, including an ocean and climate similar to Earth — but something happened to turn it into a toxic planet permanently enshrouded in haze.

The NASA mission DAVINCI+ stands for Deep Atmosphere Venus Investigation of Noble gases, Chemistry and Imaging Plus. It will be dedicated to analyzing Venus’ atmosphere to determine how it formed and evolved. The initiative will also investigate the possibility of an ocean in Venus’ past.

Next up, NASA’s VERITAS — or Venus Emissivity, Radio Science, InSAR, Topography and Spectroscopy — will map the surface of the rocky planet in an effort to shed light on how it turned out so differently from Earth. Our world is often called Venus’ twin because the planets are similar in size, but the modern comparisons stop there.

The VERITAS mission could also provide insight about the geologic history of Venus. The VERITAS orbiter equipped with radar could create 3D topography, allowing scientists to determine how active Venus is volcanically through plate tectonic processes. The spacecraft could also study infrared emissions coming off the planet’s surface.

The European Space Agency will send EnVision to observe Venus and reveal any connections between its atmosphere and geologic processes, as well as investigate the planet’s mysterious history.

“It’s great to see renewed interest in the exploration of Venus, and I’m particularly excited that these missions will be able to test our key finding that the planet’s lowlands have fragmented into jostling crustal blocks,” Byrne said.