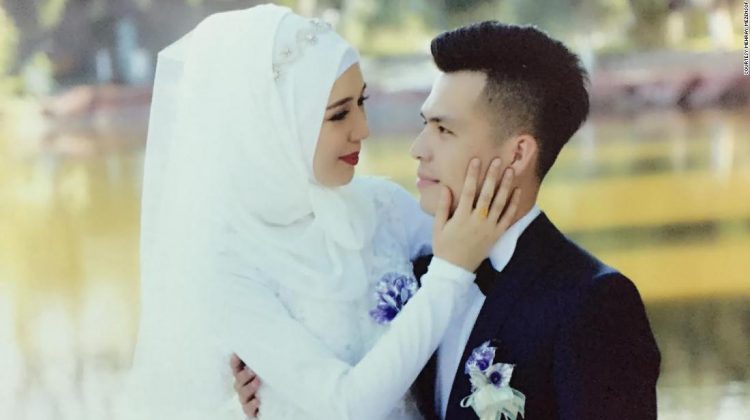 During the next four years, Taher was imprisoned in Xinjiang detention centers on three separate occasions for months at a time, Mezensof told CNN from her home in Melbourne, where the married couple had hoped to live together.

Then in April this year, she received a phone call to say her husband had been tried for separatism and sentenced to 25 years in prison.

“How could they be that cruel, like how can they be that heartless? My husband didn’t do anything. And he’s already been through so much in the last four years,” she said.

The US State department and human rights groups have accused the Chinese government of detaining up to two million Uyghurs and Muslim minorities in extra-legal detention camps, which Beijing claims are “vocational training centers” designed to prevent separatism and religious extremism.

Alongside that system of detention, experts say there is a separate program that involves the lengthy imprisonment of Uyghurs, like Taher, for alleged crimes including terrorism, separatism and inciting ethnic hatred.

Chinese government figures show a steep rise in the number of people given lengthy prison sentences in Xinjiang from 2014, when Beijing’s crackdown on the region’s Muslim-majority Uyghurs ramped up.

The records don’t reveal the crimes committed, or profile the religion or ethnicity of those convicted. CNN cannot verify whether the policy is still in place as public data for imprisonments hasn’t been released beyond 2018.

Nathan Ruser, a researcher at the Australian Strategic Policy Institute (ASPI) and author of a report into Xinjiang satellite imagery, said evidence of increased prison infrastructure and Uyghur testimony from the region indicated that systemic persecution through the courts was likely still prevalent.

Four years later, that number had surged to nearly 133,200. In total, more than a quarter of a million people were jailed between 2016 and 2018 alone, in a region with a population of about 25 million.

As more people went to jail, their sentences got longer.

According to Xinjiang’s statistical yearbooks, 87% of all sentences in 2017 were for more than five years, up from 27% in 2016. Rights groups say that sharp rise in the length of prison terms suggests the Chinese government’s crackdown in the region is becoming more extreme.

In a February report, Human Rights Watch said it analyzed almost 60 formal prosecutions between 2016 and 2018 and found that many prisoners had been convicted “without committing a genuine offense.” Most of the Uyghur and Kazakh cases involved “vague” offenses including “inciting ethnic hatred” and “picking quarrels and provoking trouble,” the report said.

Information from the Xinjiang Victims Database, a nongovernmental organization that has documented more than 8,000 Uyghur cases, suggests the pattern of high sentencing rates continued until at least 2020, HRW said.

CNN reached out to the Chinese government on allegations of a surge of Uyghur imprisonments in Xinjiang but has not received a response.

The Chinese government has stated there is no persecution of Uyghurs in Xinjiang, calling allegations of widespread human rights abuses the “biggest lie of the century.”
In July 2019, Xinjiang Uyghur Autonomous Region Chairman Shohrat Zakir said the majority of people had been released from the region’s re-education camps.
But satellite images published in a September report by the ASPI, a think tank run out of Canberra, shows a rapid expansion of prison facilities in the region. Researchers at ASPI claim there is evidence that some detainees who were released from the Xinjiang camp system are being moved into a growing complex of high-security prisons.

Ruser, an author of the ASPI report, said satellite images appeared to show that lower security facilities were being decommissioned while high-security prisons were expanding. According to ASPI, higher-security facilities are usually identified by high perimeter walls, guard towers and a restricted number of entrances to the complex.

Out of 61 detention sites, which were expanded or upgraded between July 2019 and July 2020, ASPI researchers said about 50% were high-security locations. Ruser said it was not always possible to tell if a high-security facility was a prison or a re-education center.

“There’s no sign they’re currently looking to loosen up their crackdown, at least in the sense of physical detention,” Ruser said.

The Chinese government denied the mass detention of Uyghurs in Xinjiang, until around mid-2018 when Beijing said the camps were part of an anti-terrorism and poverty alleviation campaign.

With international opposition growing to its Xinjiang policies, the Chinese government has since tried to amplify its message through officials, diplomats and state-run media.

In one glossy documentary, which aired in April on state broadcaster CGTN, Uyghur prisoners were accused of plotting to create an independent state for their people in Xinjiang.

Dilsar Ablimit, 21, saw the documentary from her home in Turkey and burst into tears — two of the people interviewed were her father and uncle. Ablimit hadn’t seen her father since February 2017 when she left Urumqi to study in Turkey age 17.

Two months after she flew out of Xinjiang, she found out her father’s three brothers had been detained — then in September 2017, she learned her father had been taken, too. At the time, her mother told Ablimit and her siblings their father was on a business trip, but Ablimit suspected otherwise.

For four years, Ablimit’s mother refused to answer questions about their father, maintaining he would return soon. But when Ablimit saw him on CGTN, she realized he may never come home.

Through tears, she said she barely recognized him. “(My father) changed a lot … He lost a lot of weight,” she said.

In photos taken before he disappeared into internment camps, her father had a full head of hair and a mustache. In the documentary, his head and mustache were shaved, and he looked thinner.

There was also one key detail that stood out: Ablimit’s father was accused in the documentary of participating in a terrorist conspiracy, which in the past has carried heavy sentences. She is now worried he is in jail, rather than a detention center.

Ablimit said her relatives are not guilty.

CNN has contacted the Chinese government to clarify her relatives’ situation, but received no reply.

Some Uyghurs said their relatives or friends serving lengthy prison sentences in Xinjiang were rushed through a quick trial, without access to an independent lawyer. In many cases, evidence for the convictions was not shared or explained.

Human rights activists have long questioned the legal system in China, where the conviction rate regularly exceeds 99%. Only 656 people were found not guilty in Chinese courts in 2020, out of 1.5 million cases.

Nyrola Elima, a Uyghur exile now living in Sweden, said the evidence that sent her cousin to jail was entirely fabricated.

Elima said her cousin Mayila Yakufu was sentenced to six-and-a-half years jail in December 2020 after being accused of financing terrorism. Elima said Yakufu’s only crime was transferring money to Australia to help her parents buy a house.

The imprisonment has left her family devastated, according to Elima. “I think they’re dead inside,” she said.

In a handwritten letter, which Elima said was penned by Yakufu in April, her cousin says she was forced to sign a false confession under threat of torture that was then used as evidence to convict her.

“They threatened me that if I did not admit guilt they would immediately take me to the National Security Forces and continuously interrogate me for a month, to see what else I will confess,” the letter allegedly from Yakufu said. CNN has seen and independently translated the letter.

Yakufu said she confessed not only to avoid torture but also to protect the rest of her family who still live in Xinjiang. “I don’t have the strength to resist such power … I really feel wronged and can’t get over it but I had no other option,” the letter said.

During major Chinese internal security crackdowns, such as the one implemented in Xinjiang, officials are often under pressure to convict large numbers of people to prove the effectiveness of the campaign, according to HRW.

“When it comes to people who are ethnic minorities, I think it is highly likely that many of the people there shouldn’t be imprisoned,” said Wang, the HRW China researcher. “If you look at the verdicts that are available it does show that … they are being punished for behavior that does not constitute crimes.”

‘I’ll never give up’

Families caught in the system endure lengthy waits for brief moments of contact with prisoners. Elima said recently her mother was able to chat with Yakufu over a short video call arranged by the local justice bureau.

“It only lasted two or three minutes. No more,” Elima said. “She just said, I’m fine, take care of yourself, take care of my kids.”

Yakufu was visibly distressed when she saw two of her children on the call, Elima said.

“She looked like there was no hope or light in her eyes,” Elima said. “Her voice was shaking, she tried really hard not to cry. She held herself from the tears to be strong for her mom and the kids. If she started crying, it would haunt my mom forever.”

In Melbourne, Mezensof believes her husband has been imprisoned in one of the newly expanded high-security prison facilities in a town called Hami, 600 kilometers (372 miles) from the regional capital Urumqi, where the couple used to live together.

She hasn’t been able to speak with him since he was sentenced.

For years, Mezensof kept quiet about her husband’s predicament to avoid inflaming matters. After he was sentenced to 25 years in prison, she said she had nothing left to lose.

“They did the worst possible thing that they can do to my husband, and now it’s just like, there was no choice left,” she said.

Although international pressure is growing for Beijing to reverse its policies in Xinjiang, there is little indication that her husband will be released any time soon. Mezensof said she won’t stop trying.

“No matter how hard it gets up I’m never gonna give up on him,” she said. “I’ll never give up until he is free.”