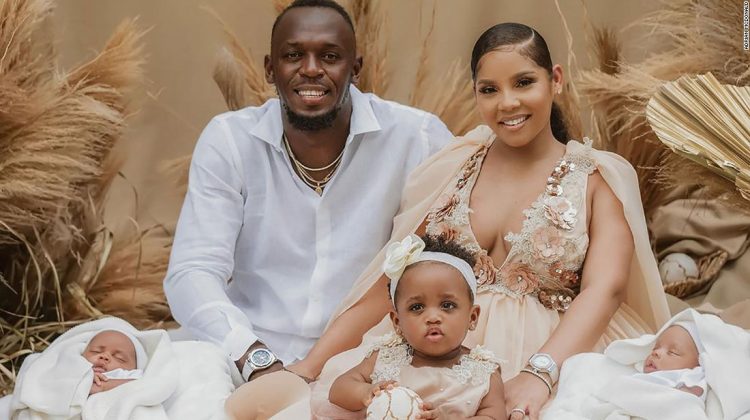 The post shows a family photo, with Bolt sitting next to his partner Kasi Bennett, their daughter Olympia Lightning, and the newborn twins.

Like their sister, the boys have been given equally fitting names — Thunder and Saint Leo. The post did not say when the twins were born.

The couple welcomed their first child Olympia Lightning together last year.
Bolt, 34, will not be participating in this year’s Tokyo Olympic Games, having retired from the sport in 2017. This year’s competition will be the first Olympics since 2000 in which the sprinter won’t be seen on the track.
He told CNN Sport in March that he was looking forward to being a spectator of the games as opposed to competing.

“I’m definitely excited to be in the stands,” he said. “I’ve never got an opportunity to really watch Olympic Games, to either go [watch] swimming, the soccer or just to see all the events. So I’m excited to actually get the chance to really experience Olympics like a true fan.”

An 11-time world champion, Bolt remains the fastest man in the world, having set a record of 9.58 seconds over the 100-meter sprint at the Berlin World Championships in 2009, as well as his 200-meter world record of 19.19 seconds

But his greatest professional accolades are his eight Olympic gold medals — three of which he won at consecutive Games, he told CNN.

“It’s always going to be the [Olympic] gold medals,” Bolt said. “I think that’s what really stamped my authority on the sport, you know what I mean, I showed my dominance throughout the years.