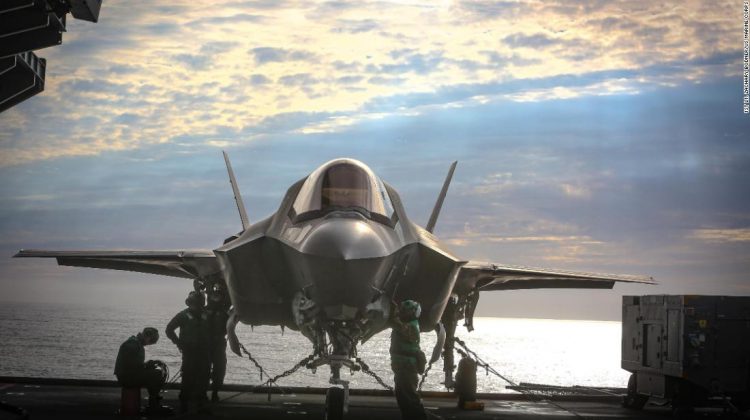 Capt. James Blackmore, commander of the air wing aboard the Queen Elizabeth, said the last time US planes flew combat missions from a foreign aircraft carrier was in 1943, when American planes deployed from Britain’s HMS Victorious in the South Pacific.

The US F-35B jets flying against ISIS were joined by similar British warplanes in support of the UK’s Operation Shader and US military’s Operation Inherent Resolve.

A total of 18 US and UK F-35Bs are embarked aboard the 65,000-ton Queen Elizabeth, the largest number of the advanced warplanes ever deployed on one ship.

US-designed F-35Bs are state-of-the-art stealth aircraft that can land vertically, enabling them to deploy on smaller warships than the massive 100,000-ton Nimitz-class aircraft carriers that are the backbone of the US Navy’s fleet.

“The level of integration between Royal Navy, Royal Air Force and US Marine Corps is truly seamless, and testament to how close we’ve become,” Blackmore said.

“The ability to operate from the sea with the most advanced fighter jets ever created is a significant moment in our history, offering reassurance to our allies and demonstrating the UK’s formidable air power to our adversaries,” British Defense Secretary Ben Wallace said in a statement.

The Queen Elizabeth is leading the UK’s Carrier Strike Group 21, which is on a seven-month, 30,000-mile (48,280 kilometer) mission that will take it as far as Japan and South Korea, including an expected transit of the South China Sea.

The carrier strike group is expected to visit 40 countries during its deployment through the Mediterranean Sea and Indian Ocean on the way to the Pacific.

“To date we have delivered diplomatic influence on behalf of the UK through a series of exercises and engagements with our partners — now we are ready to deliver the hard punch of maritime-based air power against a shared enemy,” said Commodore Steve Moorhouse, commander of the UK strike group.

“The involvement of HMS Queen Elizabeth and her air wing in this campaign also sends a wider message. It demonstrates the speed and agility with which a UK-led carrier strike group can inject fifth-generation combat power into any operation, anywhere in the world, thereby offering the British government, and our allies, true military and political choice,” Moorehouse said.

Blackmore said the British combat sorties from the carrier were the first by the UK since it participated in missions over Libya in 2011 during a NATO-led intervention into that country’s civil war.

The British Defense Ministry describes Carrier Strike Group 21 as “the largest concentration of maritime and air power to leave the UK in a generation.” US and Dutch warships are also part of the flotilla.