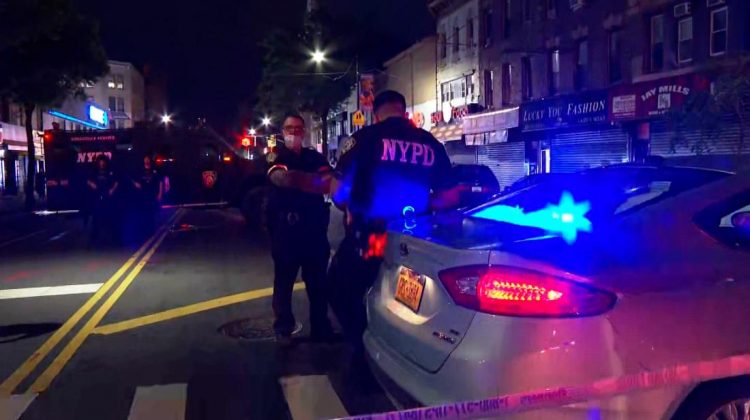 The officer, Cody Budworth, was charged with fourth-degree battery after a viral video posted on social media captured him allegedly striking a protester with a baton last summer and then striking her a second time while she was on the ground before he walked away.

“You just have to be honest and say that police in America are far more cautious today about stopping someone than they were a year ago,” said Chuck Wexler, executive director of the Police Executive Research Forum, a law enforcement policy group. “Proactive policing is much more complicated. And now we’re in the post George Floyd era, which makes police understandably cautious.”

The roughly 50 Portland police officers who stepped down this week from the bureau’s rapid response team — but will remain on the job — are hardly alone in what they view as unfair scrutiny of their profession.

In other high-crime cities — such as Philadelphia, Chicago and New York — concerns abound that hamstrung and beleaguered law enforcement agencies appear to be ceding the streets.

“The national mood is not sympathetic to the police,” Wexler said. “I think we’ll find balance down the road. We always do. But right now there’s trepidation about proactive police work.”

Starting in August, Philadelphia police officers will be prohibited from stopping people for “quality-of-life” violations, or petty offenses, unless they refuse to halt the offending behavior and move along, according to a federal court order.

The court order is part of a 2011 settlement between the city and the ACLU that required police to track stop-and-frisk incidents to reduced racial disparities. The city has argued the change would deprive officers of a valuable anti-crime tool amid a current spike in homicides.

Arguments over dice games can escalate into shootings, Ramsey said. Urinating in public can turn into indecent exposure.

Ramsey, a CNN law enforcement analyst, said there needs to be a balance between preventing certain conduct and assessing whether or not an arrest is necessary.

“I wonder what impact this is going to have in terms of people living in neighborhoods that are disproportionately affected by quality-of-life and crime issues and how they’re going to respond to this,” he said. “It can easily get out of hand.”

‘There seems to be more caution than ever’

In Chicago the police pursuit and fatal shooting of 13-year-old Adam Toledo in March prompted a new foot pursuit policy.

Body camera footage showed Toledo holding a gun in his right hand, but it vanished from sight as he turned toward the officer and began to raise his hands as he was shot. A gun was later found behind a fence a few feet from where Toledo was killed.

Days later, Anthony Alvarez, 22, was fatally shot by an officer — 10 miles from where Toledo was killed — after he ran from police. Chicago police say he was armed during the chase, and surveillance footage shows him dropping what appeared to be a gun onto the grass nearby before he was shot by an officer.

The Chicago Police Department’s 5,900-word foot pursuit policy establishes a class of crime where police are not allowed to chase suspects; proposes officers face discipline for violating that policy; and specifically bans any form of discipline for any officer who chooses not to chase a suspect.

“It’s not only a ban, but it’s a ban where the department can pretend with a semi-straight face that they’re not banning foot pursuits,” said Peter Moskos, a former Baltimore police officer and professor at John Jay College of Criminal Justice.

The new policy makes it more likely that a supervisor will decide to call off a chase when they can’t get enough information to justify a pursuit from an officer acting in the heat of the moment, according to Moskos.

“Apprehending criminals is an effective way to prevent future crimes if they’re detained,” he said. “And people don’t refrain from committing crimes because they’re afraid of going to prison. They think they are not going to get caught right then and there. That’s where deterrence works, because you’re not going to get away with a crime and now you will.”

“I’m an older white guy. I’m going to stop, I don’t feel threatened,” said Jeffrey Butts, a professor at John Jay College of Criminal Justice. “There are people whose rational expectation is that (the stop) puts them in danger. They’re going to have different response. It’s amazing to me that we haven’t confronted that and individual police officers don’t think about that. They’re just shocked and angered by someone daring to not comply.”

But those against banning pursuits outright, including law enforcement officials and advocates, say a policy such as Chicago’s is unrealistic, particularly when the fleeing suspect is armed.

“At the very moment that shootings and murders are skyrocketing, you have (people) from Philadelphia to Chicago questioning proactive police activity,” Wexler said.

He asked, “Between prohibiting foot chases in Chicago, and pretty much excluding enforcement of offenses in Philadelphia, what’s that message saying to the average cop on the street?”

“At end of day, what you have is an enormous number of guns on the street and you have a concern about how to prevent the next shooting or homicide,” Wexler said. “That’s how police chiefs are thinking about this.”

Law enforcement bosses are dealing with “a work force that is very nervous about engaging for fear that … someone resist in some way,” Wexler said. “There seems to be more caution than ever. That’s the dilemma.”

‘Nothing left for police officers to step back from’

Homicides, rape cases and felony assaults have increased in 2021 compared to the previous year.

And the New York Police Department is handing out fewer summonses — 23,994 criminal summonses in 2021 compared to 31,249 for the same period last year, police said. Tickets for quality-of-life violations, known as oath summonses, are down to 3,773 so far this year compared to 5,722 during the same time period in 2020, according to the NYPD.

As murders and other major crimes increase, the number of gun arrests are also rising. So far, the NYPD has made more than 2,000 gun arrests compared to just over 1,600 at this time last year, according to NYPD statistics.

The number of shooting victims so far this year — 721 — has surpassed the 441 reported during the same period in 2020, police said. Shooting incidents have reached 634 this year, compared to 386 the previous year.

As protests erupted around the country after the police killing of George Floyd last year, the NYPD reassigned about 600 anti-crime plainclothes officers whose job was to get guns off the streets. The department’s homeless outreach program was also disbanded.

NYPD officials have said the department put uniformed officers in unmarked vehicles to respond to the violence instead.

“What we always struggle with, I believe, as police executives, is not keeping crime down, it’s keeping crime down and keeping the community with us, and I think those two things, at times, have been at odds,” Police Commissioner Dermot Shea said at the time.

Many police officials have attributed the rise in shootings in large part to the release of thousands of prisoners under a bail reform law, though they have not provided any evidence of this.

Patrick Lynch, president of the Police Benevolent Association, the largest union representing uniformed officers in New York City, blamed the spike in crime on elected officials who pushed reforms that make it difficult for officers to do their jobs.

“In New York City, lawmakers have decriminalized quality-of-life offenses, restricted the use of ‘proactive’ policing tactics and effectively ended the prosecution of many low-level crimes,” he said. “At this point, there is nothing left for police officers to ‘step back’ from. We are doing the job exactly as our elected leaders have asked us to do it. They will have to answer for the results.”

‘Sustained … violence over 150-plus nights’

In Portland, the roughly 50 officers assigned to the police department’s crowd control team resigned one day after Officer Corey Budworth was indicted this week for allegedly using his department-issued baton to assault a protester last summer.

The resignation of the entire Rapid Response Team came after a Multnomah County grand jury on Wednesday indicted Budworth with fourth-degree battery. All the officers who resigned their positions on the team returned to their regular assignments.

Budworth is accused of shoving photographer Teri Jacobs to the ground and using a baton to strike her during a protest in August — an incident that was caught on video and posted to social media.

CNN has reached out to Budworth’s attorneys for comment.

“There is no police agency in the country that dealt with the violence like we did — the sustained level of violence over 150-plus nights,” Daryl Turner, executive director of the Portland Police Association, told CNN Friday.

“The refusal to acknowledge and address this wrongdoing goes to the heart of what’s wrong with Portland Police,” he said.

The Portland Police Association said Budworth acted in accordance with his training during a “chaotic night of burning and destruction.”

Acting Portland Police Chief Chris Davis said the resignations were not only a response to the indictment, but also to the “tremendous amounts of stress that has been placed on our entire organization and certainly the members of the RRT” over more than 150 nights of unrest in the city.

“Our entire organization — and not even just our sworn staff but also our professional staff in the last 14 months — has been put through something none of us have ever seen in our careers and at a level and an intensity that I don’t think any other city in the United States has experienced,” Davis said Thursday.

In a statement, Multnomah County District Attorney Mike Schmidt said: “We cannot expect the community to trust law enforcement if we hold ourselves to a lower standard.”

CNN’s Josh Campbell and Cheri Mossburg contributed to this report.