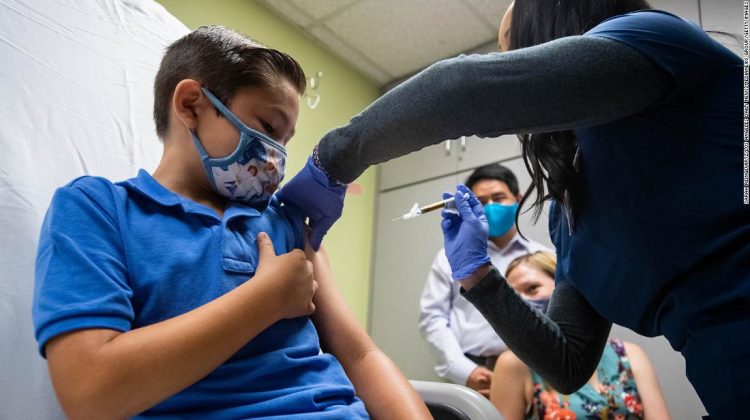 The highly contagious, aggressive variant was first detected in India and has made its way to the majority of US states, officials said.

“We cannot continue to have pockets of unvaccinated counties and areas in this country,” Dr. Jayne Morgan, executive director of Piedmont Healthcare’s Coronavirus Task Force in Atlanta, told CNN’s Fredricka Whitfield Saturday. Those pockets of unvaccinated populations create a place where variants can continue to develop, “and then those mutations have the ability to continue to learn, to become smarter, and eventually evade the immunization status of the rest of us,” Morgan said.

The fact that children under the age of 12 are not cleared to take a Covid-19 vaccine is why more eligible people need to get their shots, Morgan said.

It’s not just the virus that is negatively impacting children.

Cases of type 2 diabetes among children more than doubled during the coronavirus pandemic at one Louisiana hospital, new research shows.

Dr. Daniel Hsia, an associate professor at Pennington Biomedical Research Center in Baton Rouge, and his colleagues looked at the hospitalization rate for new onset type 2 diabetes among children at Our Lady of the Lake Children’s Hospital in Baton Rouge.

“These are very small numbers,” Hsia told CNN. “We’re a single hospital, but we think that we may be a microcosm of what’s happening across the country.”

Type 2 diabetes is by far the most common type of diabetes, and it’s associated with obesity, poor diet and a lack of exercise.

Among the 25 cases of type 2 diabetes over both years, 23 were in Black children, Hsia’s team noted.

Black, Latinx, Asian, Native American, Alaska Native and Pacific Islander children may be at increased risk for type 2 diabetes, according to the US Centers for Disease Control and Prevention. Hsia said these existing health disparities may have worsened over the course of the pandemic.

“Risk factors for type two diabetes may worsen even more during a time like this, where they have to stay home, and they don’t have access to healthy foods and physical activity, and there are sleep disturbances,” Hsia said.

Travel numbers are ticking up

More than 152 million people in the US are fully vaccinated, according to CDC data on Saturday, which is approximately 45.8% of the total population.

Nearly 66% of adults in the US have had at least one dose of a vaccine as of Saturday, according to the CDC. President Joe Biden’s goal of 70% of adults with at least one dose by July 4 is all but likely to fall short, and officials are now targeting mid-July for that milestone.

As the nation slowly marches forward with inoculations, more people are taking advantage of the summer months by traveling.

More than 2.1 million people were screened at TSA airport checkpoints on Friday, according the agency’s official count, marking the eighth day in June where the number has been over 2 million.

TSA spokesperson Lisa Farbstein said on Saturday morning it was the highest checkpoint volume since the pandemic began.

The 2,137,584 people that traveled through checkpoints on Friday is more than three times as many as the same day in 2020, according to TSA’s website.

However, screenings are still not back to their 2019 pre-pandemic levels, where TSA saw more than 2.7 million screened passengers on the same day.

As some state vaccine lotteries wind down, others begin

Ohio, which was the first state to begin a lottery for vaccinated individuals with prizes of up to $1 million, finished its program this week, according to the state’s department of health.

“The Vax-a-Million promotion was a resounding success for Ohio, with major increases in vaccinations in the first two weeks of the promotion,” said Gov. Mike DeWine. “The even better news is we have more Ohioans protected from Covid through the power of the vaccine. I continue to urge Ohioans to get vaccinated to protect themselves and their loved ones from this deadly virus.”

As states such as California are also wrapping up their million-dollar incentive campaigns, others are getting started.

Massachusetts will announce its first million-dollar winner on Tuesday, with four more drawings in the weeks ahead.
Illinois’ “All In For The Win” sweepstakes is giving residents a shot at up to $1 million, with additional scholarship awards for vaccinated youth. The first jackpot drawing is July 8.