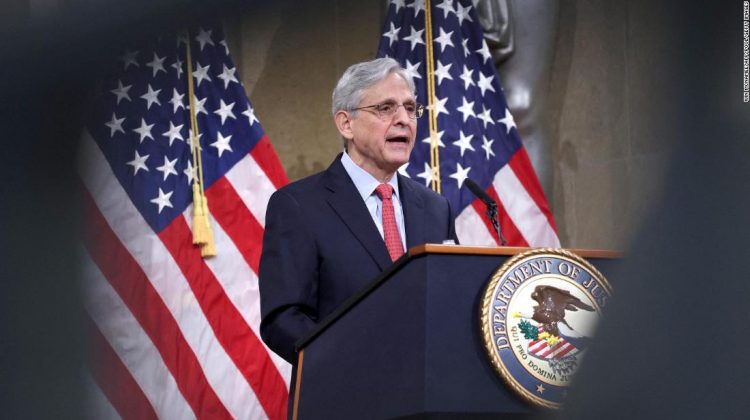 Since then, and particularly since the start of the Biden administration, skepticism among top officials has made that possibility increasingly unlikely. Instead, prosecutors have turned to traditional obstruction, conspiracy and weapons charges that could yield prison sentences similar to a novel sedition charge.

But behind the scenes, according to people familiar with the discussions, Garland has been among the top Justice Department officials who have counseled prosecutors to use legally comparable laws to make sure cases being brought against the attackers of the Capitol are on firm ground.

Former District of Columbia acting US Attorney Michael Sherwin, who oversaw the Capitol riot cases until March, previously made clear he was pushing for seditious conspiracy charges.

“I believe the facts do support those charges,” he said in a March interview with CBS’s “60 Minutes.” “And I think that, as we go forward, more facts will support that.”

Sherwin’s comments drew a rebuke from top Justice officials because he hadn’t gotten approval to do the interview, but also because some of his superiors thought he was trying to box Garland into a position that was always going to be controversial.

Some Biden administration officials believe using the sedition charge could politicize the Justice Department’s prosecution of the Capitol attackers, about 500 of whom are already facing charges.

The department says nearly 200 of those 500 defendants have been charged with obstructing the congressional proceedings on January 6 to count the electoral votes and finalize President Joe Biden’s victory. That felony charge has a maximum sentence of 20 years — the same punishment as the sedition charge but more tailored to the situation of blocking Congress’ certification of the Electoral College result.

In fact, three rioters who have already pleaded guilty have pleaded to this obstruction charge, with one admitting that he had taken part in an extensive conspiracy among the Oath Keepers extremist group intended to thwart Congress on January 6.

Current and former Justice officials say there aren’t many prosecutors who have even brought sedition-related cases. Instead, they say, the FBI and prosecutors are better off building conspiracy cases, where the law is clearer, and using cooperators to build the complex prosecutions in order to have better chances of success.

And that’s exactly what they’ve done, especially against members of right-wing extremist groups like the Proud Boys, Oath Keepers and Three Percenters.

The marquee January 6 conspiracy case has ensnarled 16 people with ties to the Oath Keepers, an anti-government group that recruits veterans and former law enforcement members. Prosecutors secured their first guilty plea and cooperation deal from a defendant in that case on Wednesday, which could give a boost to their efforts to get under the hood of the organization and win convictions later on against members who are accused of planning to disrupt Congress’ electoral vote count.

Prosecutors have also zeroed in on the extremist Proud Boys. Leaders of Proud Boys chapters in North Carolina, Philadelphia, Florida and Seattle have been charged in a conspiracy indictment, and several others from across the country with ties to the group are also charged. Investigators are examining their group chats and other communications.

Sedition cases are quite rare, adding to the challenge of using the law for January 6 attackers.

In 2010, prosecutors charged members of a Christian militant group called the Hutaree with seditious conspiracy before a judge dismissed the charges. Federal prosecutors were successful in using the law against Puerto Rican separatists in the 1930s.

The view on sedition reflects the cautious, some say risk-averse, era at the Justice Department under Garland. Officials say he is methodical in making decisions, careful to read memos from prosecutors and peppering them with questions.

“And do we have the evidence for that?” is among the questions he often asks in meetings with officials, who have learned to come prepared for follow-up questions.

Garland refused to say on Tuesday whether sedition charges are still on the table. “We follow the facts, where they go, and then we apply the law. And we will do that in each case as it happens, and when we’re ready, we’ll do what’s appropriate,” he told reporters when pressed on the issue. “All I can say is we have a panoply of federal laws that cover behavior. And we’re going to pick the ones that are appropriate for the facts.”

The seditious conspiracy law makes it a federal crime to conspire to use force to overthrow the US government or to try to prevent the execution of a federal law. Some legal experts say a hurdle for prosecutors would be showing that some of the activity by defendants isn’t protected by the First Amendment.

Similar hurdles grounded an effort last summer by then-Attorney General William Barr, who urged federal prosecutors to use the sedition law to prosecute violent protesters in the wake of the police killing of George Floyd.

Many of the January 6 defendants are charged with felonies for assaulting police, taking weapons to the Capitol, destroying property or — if they went into protected areas of the building — obstructing the official proceeding for Congress to certify the Electoral College vote. Prosecutors so far appear unwilling to wipe away that level of charge.

Nearly six months into one of the most sprawling federal criminal investigations, with a manhunt for suspects in states from coast to coast, the FBI says it is still pursuing hundreds of leads and seeking dozens of people.

In addition, a person seen on video leaving pipe bombs blocks from the Capitol remains at large.

Prosecutors have charged defendants almost every day since the attack and recently indicated in court filings that they continue to pursue as many as 100 more.

The cases, taken together, have provided more insight into the pro-Trump rioters’ political inclinations, and the Justice Department has noted the threat of right-wing rhetoric pushing ideas of election fraud and reclaiming the presidency from Biden hasn’t subsided.

Prosecutors have also said they are working to expand conspiracy charges against far-right extremist groups that they allege coordinated and planned to disrupt Congress’ certification of the presidential vote. More than 50 defendants have been linked to far-right extremist groups, and at least two groups of alleged conspirators are accused of finding contacts online, then discussing how they’d travel cross-country with firearms for the event.

The conspiracy cases, as is typical, are likely to take longer to build and to move through the courts.

CNN’s Katelyn Polantz and Marshall Cohen contributed to this report.