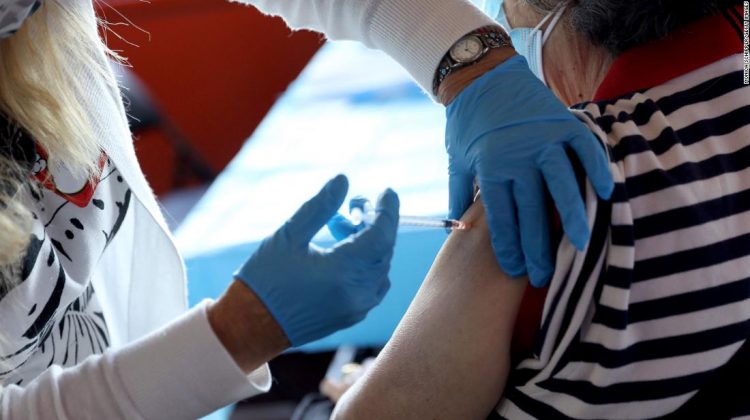 About 45.1% of the US population is fully vaccinated against Covid-19, CDC data showed, and in 16 states and Washington, DC, that proportion is up to half. But some states like — Alabama, Arkansas, Louisiana, Mississippi, Tennessee and Wyoming — have fully vaccinated less than 35% of residents.
The Delta variant, which is believed to be more transmissible and cause more severe disease, could cause an upsurge in infections, but the levels will vary depending on the rates of vaccination in each area, said former commissioner of the US Food and Drug Administration Scott Gottlieb on CBS’s Face the Nation.

“When we look across the United States, we see wide variance in terms of vaccination rates,” said Gottlieb, who compared places like Vermont and Connecticut, which have rates of over 80% with others that are struggling to get to 50%.

Models for Delta’s spread show the fall could see a peak of around 20% of the infections the US recorded in January, but the distribution of those predicted surges is not even across all areas, Gottlieb explained.

“Connecticut, for example where I am, shows no upsurge of infection, but Mississippi, Alabama, Arkansas, Missouri, show very substantial upsurges of infection. That’s based entirely on how much population wide immunity you have based on vaccination,” he said.

More than 300 million vaccine doses have been administered in the US, a feat which has enabled students to go back to the classroom, businesses to reopen and friends and families to gather once again.

“We certainly have to acknowledge that we have come a long way, and we’re out of the worst of it. We’re not going to see the massive surges that we saw over the holidays,” said Wen, who is the former health commissioner for Baltimore.

“The problem, though, is that we should really be looking at the numbers for each community instead of looking at the US as a whole because while the US as a whole is doing so much better, and there are pockets of the country that have very high vaccination rates, we also have pockets of the country that are actually undergoing massive surges right now where their hospitals are getting full again,” Wen said.

The US has been focused on getting vaccines out and into mass vaccination sites, but now it is the time to rethink the way doses are made accessible, Gottlieb told CBS.

“Now we need to think about trying to push out the vaccine into community sites where people could get it delivered to them through a trusted intermediary, that’s going to mean doctors’ offices, schools, places of employment,” Gottlieb said. “We need to think about a different vaccine delivery strategy to get the people who are still reluctant or who still face challenges getting into those access sites.”

While health experts agree full vaccination offers protection against some variants of Covid-19, Wen added that it’s unknown whether a variant resistant to vaccines will emerge.

“We just don’t know. If it’s anything that we’ve learned during Covid-19, it’s how much we need to be humble in the face of this virus,” she said.

She noted that it’s “certain” new variants will develop, which could make vaccines slightly ineffective, but not entirely.

“This is another reason why those who are unvaccinated should be vaccinated as soon as possible,” Wen said.

Variants of concern on the rise

The Delta variant, along with the Gamma or P.1 variant, have been deemed variants of concern by the CDC — meaning their danger comes from their ability to transmit more easily or cause more severe disease.

The Gamma variant, first identified in Brazil, has been detected in every US state where the CDC has variant information.

Surgeon General Vivek Murthy previously told CNN there isn’t enough data to indicate the effectiveness of Johnson & Johnson’s one-dose vaccine in regard to the Delta variant, but it has shown it can help prevent hospitalizations and deaths when people are infected with other strains.

“The key is get vaccinated, get both doses,” Murthy said.

Steve Edwards, the CEO of CoxHealth, a system of hospitals and clinics based in Missouri, told CNN on Friday that the Delta variant is unlike others.

“We can’t tell why one patient is doing poorly and one is doing well. There’s just something different about how this variant is affecting the immune system of our patients,” Edwards said.

He added along with low vaccination rates in Missouri, the Delta variant is playing a big role in the surge of cases at his hospitals.

“I think the Delta variant is what’s fueling this,” he said. “Much of the South, Midwest, much of the places that have low vaccination rates — if confronted with the Delta variant, will see a similar kind of surge of patients as we’re beginning to see right now.”