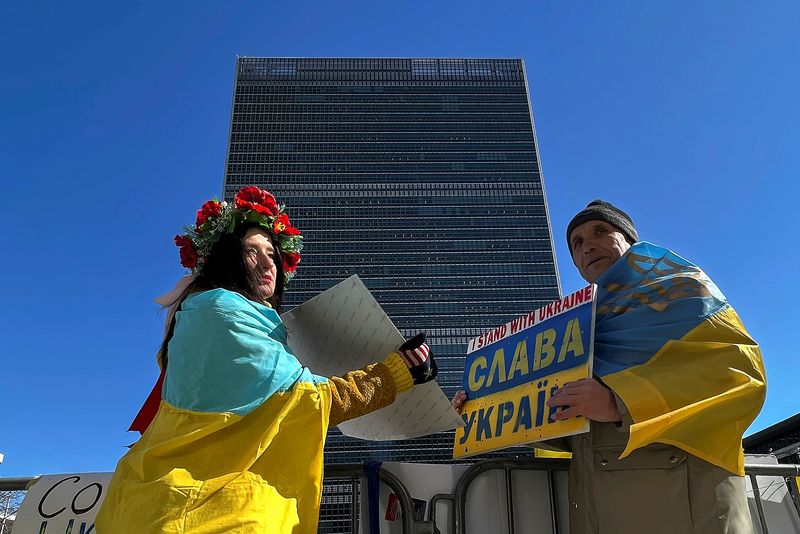 UNITED NATIONS (Reuters) – Russia’s invasion of Ukraine and a global food crisis aggravated by the war will be the focus of world leaders when they convene at the United Nations in New York this week, a gathering that is unlikely to yield any progress toward ending the conflict.

“It would be naive to think that we are close to the possibility of a peace deal,” said U.N. Secretary-General Antonio Guterres ahead of the high-level meeting of the 193-member U.N. General Assembly, which starts on Tuesday. “The chances of a peace deal are minimal, at the present moment.”

Geopolitical divides, hardened by the seven-month-old war, are likely to be on full display as the United States and Western allies compete with Russia for diplomatic influence.

U.S. Ambassador to the United Nations, Linda Thomas-Greenfield, said, “other countries have expressed the concern that … as we focus on Ukraine, we are not paying attention to what is happening in other crises around the world.”

“That is not the case,” she told reporters, adding that while Ukraine will feature next week “it will not be the only thing that we’re dealing with.”

Guterres said the geopolitical rifts were “the widest they have been since at least the Cold War.” He warned they “are paralyzing the global response to the dramatic challenges we face,” citing war, climate, poverty, hunger, and inequality.

Russia and Ukraine are major grain and fertilizer exporters and the United Nations has blamed the war for worsening the food crisis that was already fueled by climate change and the COVID-19 pandemic.

The United States is due to co-host a food security summit with the European Union and the African Union on the sidelines of the U.N. gathering, along with a COVID-19 global action plan ministerial meeting and a replenishment conference for the Global Fund to Fight AIDS, Tuberculosis and Malaria.

“Underlying a lot of these meetings will be a huge amount of tension between Western countries and representatives of the global south in particular,” said Richard Gowan, U.N. director at the International Crisis Group.

“There’s still a lot of ill feeling over issues such as the COVID vaccine rollout, climate financing … and now food prices. All these issues are driving major wedges amongst U.N. member states,” Gowan said.

Russia has been trying to chip away at its international isolation after nearly three-quarters of the General Assembly voted to reprimand Moscow and demand it withdraw its troops within a week of its Feb. 24 invasion of neighboring Ukraine.

Russian Foreign Minister Sergei Lavrov, his U.S. counterpart Antony Blinken and French President Emmanuel Macron all visited African states in the past several months, vying for influence. Africa has been hard hit with a famine expected to be declared in Somalia in the coming months.

Macron intends to use his two-day visit to New York to lobby countries that have remained neutral in the war to try and bring them onside with the West, French officials said, with a focus India, Gulf countries, Africa and some Latin American states.

“What we need is peace in Europe, a turning away from great power confrontation and its endangerment of global security, and the shaping of a fairer and more responsive multilateral order,” Kenya’s U.N. Ambassador Martin Kimani said. “That’s where they need to pay attention, as do we all.”

Russia’s strategic partner China has been firmly on the fence, criticizing Western sanctions against Russia but stopping short of endorsing or assisting in the military campaign. In a surprise acknowledgement, Russian President Vladimir Putin on Thursday said China’s leader Xi Jinping had concerns about Ukraine.

For the past two years leaders were allowed to submit video statements because of pandemic restrictions, but this year they have to travel to New York to speak in the General Assembly chamber. Putin and Xi are sending their foreign ministers.

However, the General Assembly agreed on Friday to allow Ukrainian President Volodymyr Zelenskiy send a pre-recorded video statement. The decision was adopted with 101 votes in favor, 7 against and 19 abstentions.

Ukrainian Foreign Minister Dmytro Kuleba is expected to attend. He will attend a U.N. Security Council ministerial meeting on Thursday on Ukraine, along with Blinken, Lavrov and China’s Foreign Minister Wang Yi.

The U.S. president is traditionally the second leader to address the General Assembly, but Joe Biden will this year speak on Wednesday – his appearance delayed because he is traveling to London for Queen Elizabeth’s funeral on Monday.

Russian Foreign Ministry spokeswoman Maria Zakharova said that so far Lavrov had received requests for about 20 meetings with other leaders.

She told reporters in Moscow that Russia would advocate for “the strengthening of the UN’s central coordinating role in world affairs and strict observance of its Charter, including the principles of the sovereign equality of states and non-interference in their internal affairs.”

Iranian President Ebrahim Raisi is also traveling to New York. While it is unlikely Tehran and Washington will overcome an impasse to salvage a 2015 nuclear pact soon, Iran will use the gathering to keep the diplomatic ball rolling by repeating its willingness to reach a sustainable deal.

While Ukraine will dominate the week-long U.N. event, the climate crisis will also garner attention. But many other global crises are likely to take a back seat, like the loss of Afghan women’s rights since the Taliban came to power 13 months ago.