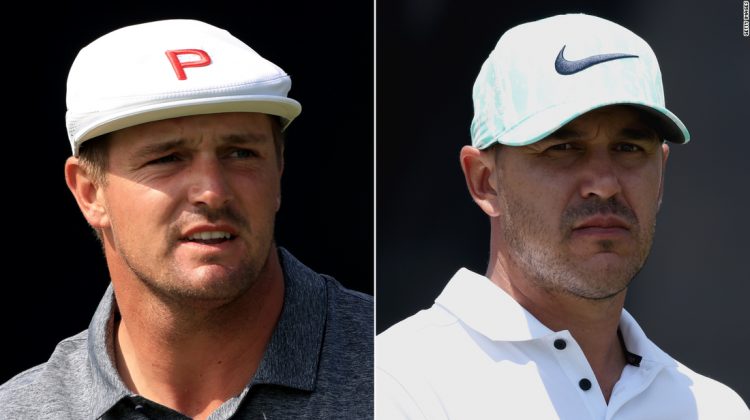 Ever since Koepka’s eye-roll reaction to DeChambeau walking behind him at last month’s PGA Championship, the pair have exchanged barbs, although they have both since said they believe their rivalry is good for golf.

And just when we thought the golf at the third major of the season might take center stage at Thursday’s opening round at Torrey Pines, DeChambeua upped the ante.

After Koepka’s opening round two-under 69, Koepka was preparing for his post-round interview with Todd Lewis for the Golf Channel.

However, unbeknown to him, DeChambeau happened to be walking behind him just out of shot, this time walking on grass so he was not making any noise.

But, DeChambeau — dressed in his customary white hat — then took the moment to jump and wave his left arm, all of which was captured on camera.

While the incident at May’s PGA Championship that sparked all this drama was an accident, according to reigning U.S. Open winner DeChambeau, this time, he decided to have some “fun with it.”

Visit CNN.com/sport for more news, features, and videos
“It’s one of those things people are thinking I was doing something, I wasn’t doing anything at the PGA Championship,” DeChambeau told the media after his round on Thursday.

“I saw an opportunity and I just had fun with it.”