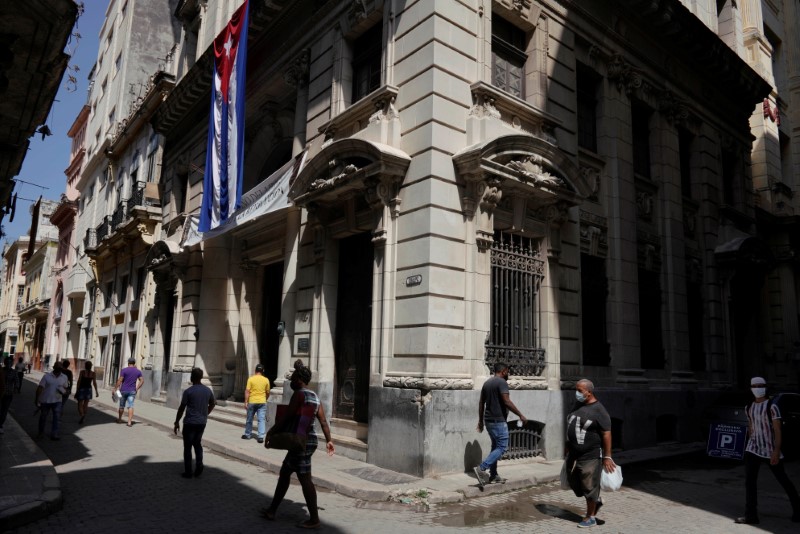 © Reuters. FILE PHOTO: People walk under a Cuban flag at a commercial area amid concerns about the spread of the coronavirus disease (COVID-19), in Havana, Cuba, August 3, 2021. REUTERS/Alexandre Meneghini

WASHINGTON (Reuters) -The U.S. Treasury Department said on Friday it was imposing sanctions on two Cuban Ministry of Interior officials and a military unit over the government’s crackdown on protesters last month.

The department said it was sanctioning Romarico Vidal Sotomayor Garcia and Pedro Orlando Martinez Fernandez and the Tropas de Prevencion (TDP) of the Cuban Ministry of Revolutionary Armed Forces.

U.S. Secretary of State Antony Blinken said TDP soldiers had been deployed “and have reportedly attacked and beaten protesters, while making violent arrests.”

“The United States supports the people of Cuba in their brave call for freedom as we identify those who oppress them and attempt to maintain a repressive system,” he said in a statement. “We will continue to take actions to promote accountability for the Cuban government’s human rights abuses.”

Cuba’s Foreign Minister Bruno Rodriguez on Twitter rejected the sanctions, calling them “U.S. opportunistic measures against Cuba’s Ministry of Interior officers and Armed Forces Prevention Troops. Such measures reflect double standards of a government used to manipulation and lies to maintain the blockade against #Cuba.”

In July, the United States put sanctions on the Cuban police force and two of its leaders.

The protests erupted amid Communist-ruled Cuba’s worst economic crisis since the fall of its old ally, the Soviet Union, and a record surge in coronavirus infections. Thousands took to the streets, angry over shortages of basic goods, curbs on civil liberties, and the authorities’ handling of the pandemic.

Cuban President Miguel Diaz-Canel has blamed the unrest on the United States, which in recent years has tightened its decades-old trade embargo on the island. He has said many protesters were sincere but manipulated by U.S.-orchestrated social media campaigns.

The U.S. Treasury earlier announced sanctions https://www.reuters.com/world/americas/us-impose-sanctions-cuban-officials-over-crackdown-protests-source-2021-07-22 on Cuba’s defense minister and an interior ministry special forces unit over allegations of human rights abuses in the crackdown that followed the protests, in which hundreds of activists were detained.