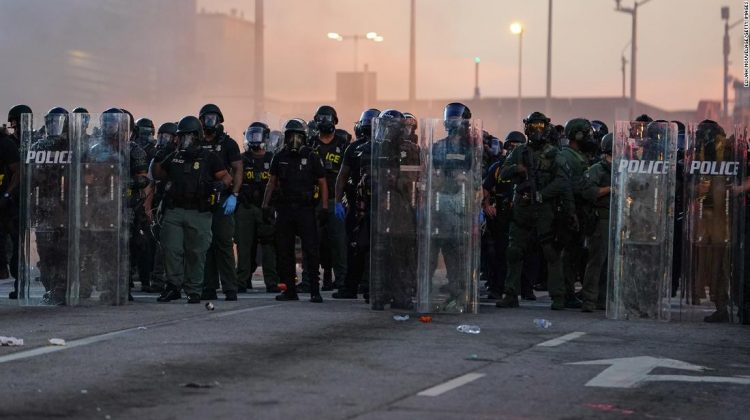 Taniyah Pilgrim and Messiah Young were in their vehicle in downtown Atlanta on May 30, 2020, when they were caught in traffic during the protests sparked by the death of George Floyd five days earlier.

The lawsuit claims that while the students’ car was stopped due to heavy traffic, they were approached by six Atlanta Police Department officers and told to open the door and get out of the vehicle. As Pilgrim turned to get out of the car, she was tased twice while still in the passenger’s seat, according to the lawsuit.

An officer then broke the window on Young’s side and Young was also tased twice, while he was in the driver’s seat, the lawsuit added.

“I’m going to be reminded of this every single day of my life, so there just needs to be something done so that people don’t experience this ever again,” Young said at a news conference Thursday.

The students said they were out picking up food when they encountered the protests. Mayor Keisha Lance Bottoms had called a citywide curfew to start at 9 p.m., but the students said in the lawsuit they were unaware of it. The incident happened around 9:40 p.m. that night, the lawsuit says.

Young was charged with eluding police but the charges were dropped the next day. Pilgrim was never charged, according to the lawsuit.

The lawsuit seeks unspecified damages and names several individual officers, the city of Atlanta and Mayor Bottoms as defendants.

The Atlanta Police Department did not respond to a request for comment. A spokesperson for the mayor’s office said the lawsuit has not been served yet so they are unable to comment.

When the attorneys played the body camera footage of the incident, Young turned away, saying the images were too triggering for him. Pilgrim dabbed her eyes.

“Living through this has been such a horrifying experience in, like, the anxiety that that night brings me every day … the nightmares that I still have to experience almost every single night,” Pilgrim said. She added that “life took a total turn” for “something that we didn’t ask to be involved with.”

The lawsuit say that four of the six Atlanta Police Department officers involved were fired. And they were all booked on charges of aggravated assault, simple battery and criminal damage to property in the aftermath of the incident. Two of them had their terminations overturned and returned to the force.

Young’s father said the incident has had a lasting impact on his son and he’s now “like the walking dead.”

At the time of the incident, Pilgrim had said, “It was the worst experience of my life” and “I thought I might be killed,” during an interview with CNN last June.

The students’ attorney said the city has “failed to take responsibility.”

“It’s really overwhelming to think that they could be handled in this way, and their lives change so dramatically, and no one step up and say we need to make this right.” attorney Mawuli Davis said.

Chris Stewart, another attorney working on the case, has worked with the families of Floyd, Ahmaud Arbery and Rayshard Brooks, among others.

Stewart has pledged to file a lawsuit every week in June against the city of Atlanta. “The city of civil rights is the city of injustice right now, when it comes to these cases,” Stewart said.