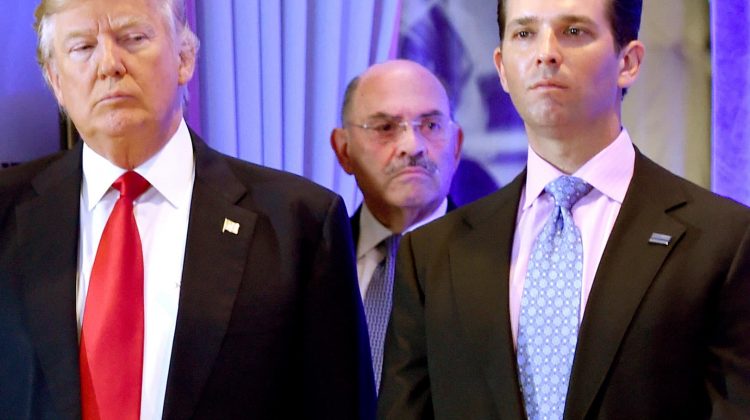 Then-President-elect Donald Trump along with his son Donald, Jr., arrive for a press conference at Trump Tower in New York, as Allen Weisselberg (C), chief financial officer of The Trump, looks on, January 11, 2017.

The New York Times also reported that Trump’s lawyers were told that DA Cyrus Vance Jr. is considering charging his company and Weisselberg in connection with fringe benefits he received from Trump’s New York-based company.

Vance could announce criminal charges as early as next week if he decides to seek an indictment, people with knowledge of the matter told the newspaper.

Prosecutors are known to be investigating whether taxes were paid on those benefits to Weisselberg and other executives at the Trump Organization, for items that include apartments and school tuition.

Fischetti in a statement to NBC News said “there are no charges that are going to be leveled against Mr. Trump himself.”

“The corporate office will plead not guilty and we will make an immediate motion to dismiss the case against the corporation,” Fischetti said. “Mr. Trump is outraged that they are still going after him by going after his company where he has loyal employees for decades.”

“It looks like they are going to come down with charges against the company and that is completely outrageous,” Fischetti said.

“I’ve been practicing for over 50 years and I’ve never seen a case like this where they would indict or charge an individual or a company on tax evasion for using a company car or company apartment and then tie it to the company that he is working for without any evidence that what he did benefited the company.”

Weisselberg has been eyed for months by Vance’s investigators, who more broadly are probing allegations that the Trump Organization illegally manipulated the stated value of real estate assets to receive more favorable terms on insurance and loans, and to lower their tax liability.

Prosecutors were believed to be pressuring Weisselberg to cooperate with their broader probe of the company.

“They could not get Allen Weisselberg to cooperate and tell them what they wanted to hear and that’s why they are going forward with these charges,” Fischetti said.

“And they could not get him to cooperate because he would not say that Donald Trump had knowledge or any information that he may have been not deducting properly the use of cars or an apartment.”

Fischett confirmed that he and other Trump lawyers met Thursday with senior prosecutors in Vance’s office in a bid to get them not to charge the company.

Mary Mulligan, Weisselberg’s lawyer, declined to comment to CNBC about the Times report. A spokesman for Vance did not immediately return a request for comment.

CNBC also has reached out to request comment from Trump directly and his company.

Vance is known to be using a special grand jury for his investigation of Trump.