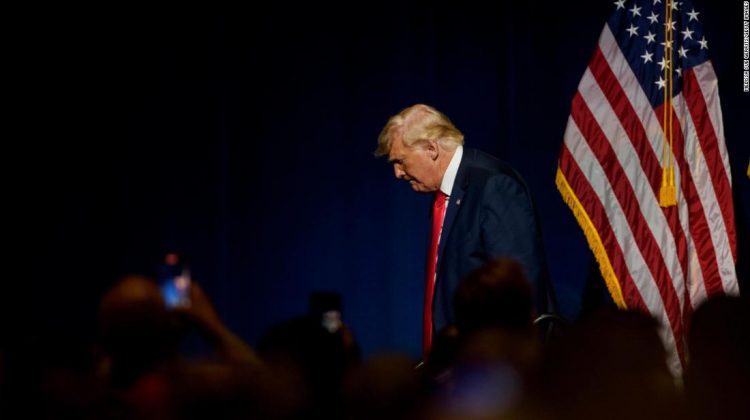 The effort to oust the Republicans who crossed him will be one of the biggest tests of Trump’s post-presidential power, assessing whether the former President still has the sway with base Republican voters that he enjoyed during his four years in the White House. Trump’s trip to Northeast Ohio is expressly meant to remind voters in the area of Gonzalez’s vote to impeach the Republican president earlier this year, and boost Max Miller, a former Trump aide who is challenging the congressman in the district’s Republican primary next year.

But time has helped Gonzalez, with even his most ardent opponents admitting that the furor around his vote has since dissipated, as voters go about their daily lives and, in part, forget about the outrages of early 2021.

“If the election was (months ago), I do believe Gonzalez would have lost,” said Jim Renacci, a longtime Ohio Republican who is mounting a primary challenge against incumbent Gov. Mike DeWine. “If the election was today, he is probably still in a danger zone… I think it would be a very tough race for him today, but he has got a year to prove himself out and voters do forget.”

Trump’s goal this weekend is to make sure that doesn’t happen.

“President Trump will aggressively campaign against any and all RINOS who do not represent the will of their voters,” Liz Harrington, a spokeswoman for the former president, said, referring to “Republicans in Name Only.”

Gonzalez has stood his ground throughout the political fracas, arguing that Trump’s rhetoric ahead of the January 6 insurrection and the fact that Trump did little to stop those actions swayed him to back the impeachment charges. And he has doubled down: Much to the dismay of local Republicans, Gonzalez also voted to establish a bipartisan commission on the insurrection.

In a statement to CNN, Gonzalez’s congressional campaign said the congressman was “focusing on issues that matter to the people of Northeast Ohio” like “strengthening our economy, fighting back against the Chinese Communist Party and its unfair trade practices, serving our veterans and providing the highest level of constituent services.”

“Max Miller isn’t fit to represent our community in Congress, and the campaign, as it develops, will bear this out,” the campaign said.

The predicament the congressman, who initially made a name for himself as a standout wide receiver at Ohio State University and later in the NFL with the Indianapolis Colts, finds himself in highlights the broader divides inside the Republican Party, pitting the one-time Trump supporter whose support for the former President has waned against those who remain loyal to the Republican leader.

Dave Handwerk, the mayor of Orrville, Ohio, a town in Gonzalez’s district, has stood by his congressman in the face of withering criticism, arguing that the blowback his representative has received is a symbol of the “sad state of affairs” inside the Republican Party.

Gonzalez has also responded to the blowback by raising questions about his own party and warning members about too much Trump loyalty.

In yet another sign that he is standing by his vote, Gonzalez recently started a joint fundraising committee with Wyoming Rep. Liz Cheney, another Trump target who lost her leadership role in the House because of her outspokenness on Trump’s election lies. A Gonzalez aide said the committee was created because “some donors wanted to write checks to both of them” and the committee makes it easier to do that.

But Gonzalez’s warnings have largely fallen on deaf ears among Republican activists in his district, many of whom are hellbent on ousting Gonzalez. And his break with Trump earned him a serious primary challenge from Miller, who announced his campaign in February expressly because Gonzalez “betrayed” his voters when he voted for impeachment.

“I won’t back down. And I’ll never betray them,” Miller tweeted at the time.

Miller, despite being directly tied to Trump, has issues he will have to address during his campaign. Some Republicans, including another challenger to Gonzalez, have already noted Miller faced multiple criminal charges against him between 2007 and 2010.
“We don’t have room for error. So people’s background and their character is important to voters,” said Jonah Schulz, a Republican also challenging Gonzalez in the primary. Of Miller, he added, “We see this class of people in America… of individuals who play by a different set of rules and aren’t accountable like the rest of us are.”
And Miller enters the primary with a money disadvantage — facing a Gonzalez war chest that is twice as large as his $438,554 in the bank.

The gulf could be easy for Miller to make up. Trump signaled a willingness to help him raise money when he headlined a fundraiser for Miller in March.

The two differing strategies are clear: As Miller runs toward Trump, Gonzalez has repeatedly painted a worrying portrait of a Republican Party strictly loyal to their former leader.

“As a party, we need to be honest about where we are. And we are completely out of power at the federal government. We don’t have the White House, we don’t have the House, and we don’t have the Senate. Sometimes when I hear us talk about the state of our party, we talk about how we somehow won an election. We lost all of them when you look at the federal government,” Gonzales said in the interview with The City Club of Cleveland. “My concern is we are trying to excommunicate our own voters. And when you are fully out of power, you need to be adding voters, not subtracting voters.”

The anger directed at Gonzalez, even if it has diminished, continues to simmer with activists who helped get him elected.

“The number of people contacting the party and saying this is awful, terrible, horrible, we got to get rid of him, has definitely decreased,” said Doug Deeken, the chair of the Wayne County Republican Party. “But I don’t think anyone has changed their mind about his vote.”

And the problem for Gonzalez is that just as average Ohioans begin to forget about the vote, something happens to remind them. Most recently, that reminder came when the Ohio Republican Party’s central committee censured Gonzalez in May for the vote, calling on the congressman they had endorsed just a few short months before to resign his post.

Gonzalez’s “bet is simply to wait it out and hope that people forget and his belief all along was that people would turn on Trump and that he would be there,” said Shannon Burns, a Republican activist who runs the Strongsville GOP, a grassroots organization that once backed Gonzalez. “But I think it is incumbent on all of us to inform the Republican voters of just who this person said he was and who he actually is.”

Burns, who pushed for the Ohio party to not only censure Gonzalez but to also call for his resignation, added: Trump “being here will draw all of the attention necessary to those people who don’t know that Anthony Gonzales voted to impeach. They are going to know after Saturday.”

Another issue for Gonzalez is just how politically active Ohio figures to be in 2022, with a competitive Senate race, a likely contentious Republican primary for governor and multiple closely watched House races. Nearly all Republicans in those races will likely use Gonzalez — and Trump’s antipathy for him — as a way to win Trump’s support.

And in no race is that clearer than the Republican primary for Ohio’s open Senate seat, where candidates hope to tie themselves as closely to Trump as possible.

Josh Mandel, the former Ohio Treasurer; Jane Timken, the former chair of the Ohio Republican Party; and former Senate candidate Mike Gibbons all plan to attend the Trump rally. Gibbons will also host a tailgate before the event, while Timken has a radio ad ahead of the event in which she says “no one is more committed to advancing his America First agenda than me.”

The group of Republican Senate hopefuls have all repeatedly slammed Gonzalez, too. Mandel called him a “traitor” and while Timken was initially less hostile to him, she later said the impeachment that Gonzalez backed was a “sham.”

But arguably the biggest issue for Gonzalez could be redistricting.

Ohio is set to lose a congressional seat because of relatively slow population growth. While new guidelines in the state will make the process more bipartisan, Republicans will have more control because they have dominated state politics for years and currently control all levels of state government.

And Republicans in Northeast Ohio believe it is entirely possible that Gonzalez’s district — which snakes from the suburbs of Cleveland on the shores of Lake Erie, down the Cuyahoga Valley into suburban communities like Strongsville and Medina and into more rural areas southwest of Akron like Wooster and Wayne County — could be eliminated entirely.

“They are going to have to eliminate one district,” said Renacci, who previously represented Gonzalez’s district.

The venue for Trump’s event also hints at this possibility. The former President will bring together in Wellington, Ohio, a town in Lorain County that is currently outside of Gonzalez’s district. But some Ohio Republicans believe the new district could include more rural areas Southwest of Cleveland.

“The big question is what does the district look like because the only thing we know for sure is there aren’t going to be sixteen districts in Ohio,” said Deeken. “Until we know, we are just spitting in the wind here.”