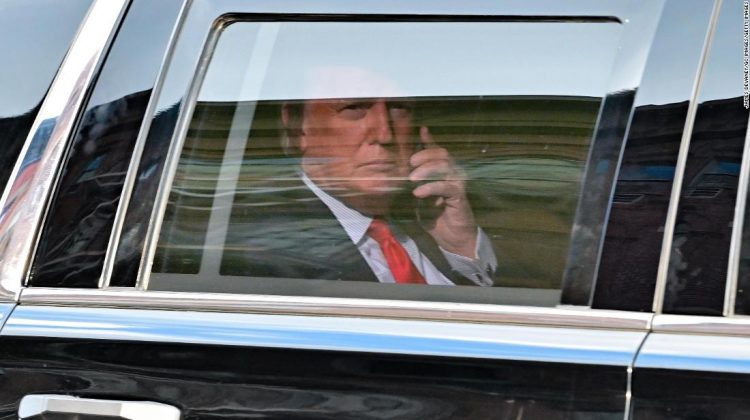 The outgoing district attorney, Cyrus Vance Jr., is likely to decide whether to charge a case against the former President, the Trump Organization or company executives by the end of his term in December, CNN previously reported.

If that happens, the next district attorney — most likely the winner of Tuesday’s primary, given the overwhelmingly Democratic makeup of Manhattan — will oversee the prosecution.

With eight contenders, the Democratic primary race for district attorney is a crowded one, and unlike the New York City mayoral primary, it doesn’t have ranked-choice voting.

Whoever wins is likely to incur Trump’s ire if they continue Vance’s work, since the former President has been quick to accuse Democrats investigating him, including Vance and New York state Attorney General Letitia James, of pursuing political prosecutions.

“If you can run for a prosecutor’s office pledging to take out your enemies, and be elected to that job by partisan voters who wish to enact political retribution,” Trump said in May, after James disclosed her office was working with the district attorney on its criminal investigation, “then we are no longer a free constitutional democracy.”

Some of the candidates have already expressed their views on the former President. Alvin Bragg, widely seen as a leading contender in the race, has boasted of having sued the Trump administration more than 100 times while he was in the state attorney general’s office, where he was chief deputy. He has also noted that he led the team that sued the Donald J. Trump Foundation, which resulted in Trump personally paying $2 million to an array of charities.

“I’ve seen him up front and have seen the lawlessness that he can do,” Bragg said on the radio show “Ebro in the Morning,” in January. “I believe we have to hold him accountable. I haven’t seen all the facts beyond the public but I’ve litigated with him and so I’m prepared to go where the facts take me once I see them, and hold him accountable.”

Another leading candidate, Tali Farhadian Weinstein, has said comparatively little about Trump, saying it would be improper to comment on the subject of an ongoing investigation.

In 2017, Farhadian Weinstein interviewed with members of Trump’s White House Counsel’s office for a federal judgeship, a position for which she had also applied during the Obama administration, according to The New York Times. In the final debate last week, Farhadian Weinstein defended having sought the judgeship, saying: “It is not factual to say that federal judges, which are a separate part of the federal government, would work for the president. And so, to have been considered to be appointed to the federal bench while Mr. Trump or anyone else was president, doesn’t mean that I would have been working for his administration.”

She worked as counsel to Attorney General Eric Holder and later as general counsel in the Brooklyn district attorney’s office, where she successfully sued the Trump administration to get Immigration and Customs Enforcement officers out of courthouses in Brooklyn, after finding that female victims of domestic violence were too afraid to come to court for fear of finding officers present.

Other contenders in the race also have history with Trump or his policies. Tahanie Aboushi, a civil rights lawyer, touts her experience spending four days at John F. Kennedy International Airport in the wake of Trump’s 2017 travel ban on Muslim-majority countries, where she supplied legal assistance to people detained by US Customs and Border Protection.

Candidate Lucy Lang, a veteran of the Manhattan district attorney’s office, counts as one of her senior advisers a former colleague who led the office’s investigation into Trump SoHo, which examined whether or not the Trump Organization misled potential buyers about the values of units, a probe Lang has said shouldn’t have been shuttered.

In November, she tweeted: “Today I called for the #ManhattanDA investigations into Donald Trump to continue. Immunity is not a consolation prize to losing and election, and no one is above the law. We can’t allow Donald Trump’s failed presidential campaign to absolve him of responsibility.”

But she has also taken pains to distance herself from Trump-related commentary, saying in June that “I think that one of the worst things the next District Attorney could do would be to say something on the campaign trail that would suggest anything other than complete impartiality when it comes to investigating all the cases in front of the office and putting themselves in a position where they might face a recusal motion or a removal of jurisdiction.”

Another candidate, public defender Eliza Orlins, has been more blunt in her criticism of the former President. In December, she publicly cheered Trump’s election loss, tweeting: “We did it! We got rid of Donald Trump. But that won’t change the fact that our systems inherently favor the rich and powerful and oppress the poor.”

New York state Assemblyman Dan Quart, also vying for the office, has split the difference, saying in February, “I’ve been very active and vocal on my feelings on Trump’s abuses of the rule of law, of his terrible policies, of his indecency, but that’s different than being a district attorney who has to judge each case on the merits.”

Diana Florence, a former prosecutor in the Manhattan DA’s office who left the office in January 2020 after a judge dismissed one of her cases when she failed to turn over evidence to defense attorneys, has suggested she believes Trump is due for retribution.

“I think what’s amazing about Donald Trump is that he ascended to the highest office in our nation and even before that had tremendous success and that was while doing whatever the heck he wanteds to do,” she told Forbes in November. “He will now face the ability to be prosecuted. He had a brief immunity while a sitting president, but as I just talked about he had a defacto immunity for being a wealthy and powerful man for many many years. And I believe that time will be changing.”