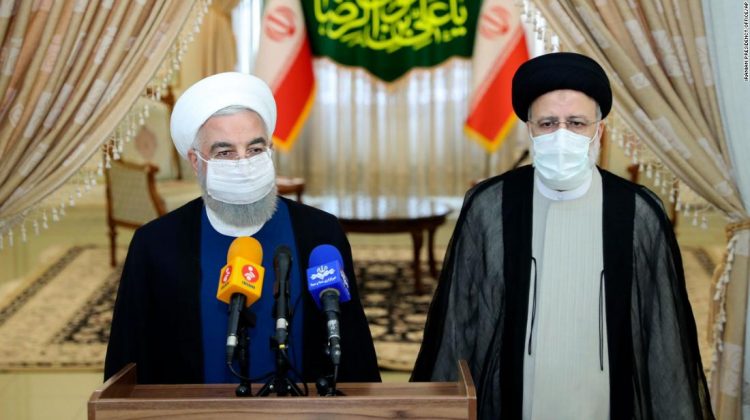 “What Trump is about to do is extend the life of the regime by another 30 years,” an elderly Iranian-American told CNN in the hours before the speech. The Islamic Republic, established in the wake of the overthrow of the autocratic, staunchly pro-Western Shah, was just a few months shy of its 40th birthday. The nuclear deal, on the other hand, seemed to serve as the opening salvo of reform in the country.

In June 2017, Iranians had shown up in droves to reelect President Hassan Rouhani in what was seen as a referendum on his landmark deal. The urgency to preserve the most significant opening up of the insular country to the West was palpable.

But along came Trump. And Iranians, who have arguably witnessed more dramatic political twists and turns in the last seven decades than any other people, knew that the US President’s plans would backfire.

The so-called “maximum pressure” campaign would not achieve its stated goal of toppling Iran’s clerical establishment. It would prop it up. The skepticism of the West that forms the ideological core of the regime would be underscored, highlighted and scribbled around in frenzied circles.

Iran had kept up its end of the bargain, by the State Department’s own admission, but the US pulled out anyway. The ensuing sanctions led to rampant food and medicine shortages, and sent the country into a financial tailspin. European parties to the deal proved powerless in salvaging it.

“We told you so,” the conservatives told Iranians a thousand times over.

Much has happened since then. In 2020, Trump ordered the killing of Iran’s most revered general, Qasem Soleimani, further enraging conservatives. His funeral was one of the largest in the region’s history. Trump was voted out of office that same year. His successor, Joe Biden, immediately moved to restore the deal. Reformist Iranians thought, perhaps, that they could dial back the clock to May 2018.
But the clerical establishment’s response was a resounding “no.” Nowhere was that more loudly articulated than in this week’s election, which was engineered to deliver victory for ultra-conservative judiciary chief Ebrahim Raisi, the most hardline president Iran has seen in decades.
Both the process and the outcome of the election were exceptional in their brazenness, even by the Islamic Republic’s standards. The Supreme Leader Ali Khamenei was doubling down. Iran’s political future would become even more micromanaged by the ultra-conservative clergy.

But this election could have reverberations beyond the four or eight years Raisi will be president. Raisi, a close associate of the ailing 81-year-old Khamenei, is suddenly being referred to as an Ayatollah, an honorific title to indicate high rank among Shia Muslims. Khamenei currently holds that title. So did his predecessor and founder of the Islamic Republic, Ruhollah Khomeini. Images of Raisi alongside Khamenei pervaded Tehran’s cityscape in the runup to the election. Khamenei, people reminded each other in hushed tones, was also president before he ascended to the supreme leadership.

The clerical elite, it appeared, were rolling out Raisi’s rite of passage to succeed Khamenei and take the highest office of the land.

This has grated on many Iranians. Khamenei, it seemed, had chosen cementing his legacy over the public’s calls for constitutional reform. The conservative Guardian Council, which vets presidential candidates, barred Raisi’s serious rivals from the presidential race. As a result, voter turnout at the presidential election was below 50% for the first time in the history of the Islamic Republic.

To add insult to injury for the reformist camp, Raisi personifies the darkest aspects of the regime that Iranians have chafed under. For two years, he has headed Iran’s draconian judicial branch, which boasts one of the worst capital punishment rates in the world and metes out long jail sentences for some of the most subtle forms of dissent, such as protesting against the mandatory headscarf. In 1988, he allegedly was part of a death commission that executed and forcibly disappeared thousands of political prisoners in secret. For the rest of his career, he was a leading prosecutor who was linked to multiple crackdowns on dissent.

Most Iran’s voters did not vote for Raisi. But the clerical class opted to contend with public disgruntlement rather than deal with Western fickleness. The cost of US unpredictability was tremendous. Iranians buckling under the strain of a flailing economy have repeatedly protested in large numbers. Too much was at stake, and the conservative clergy want to cut their losses.

Moderate politicians, who under outgoing President Hassan Rouhani enjoyed a popular mandate, have been greatly undermined. Sanctions set the government up for failure, making Iran’s savvy negotiators and diplomats, like Foreign Minister Javad Zarif, look weak. Meanwhile, the hardliners have successfully portrayed themselves as survivors. They prevailed over the US maximum pressure campaign that was repeatedly billed by its own architects, namely former Secretary of State Mike Pompeo, as the most aggressive sanctions regime Iran has ever faced.

The message from Iran’s election will resonate around the region: in these most uncertain of times, only autocrats can ensure stability. Some of the biggest cheerleaders for authoritarianism — Russia’s Vladimir Putin and Syria’s Bashar al-Assad — were quick to congratulate Raisi on his win.

Proponents of Middle Eastern regimes will argue that the growing gap between the region’s leadership and its people is a lesser danger to states than the risk posed by clumsy Western interventionism.

Trump’s maximum pressure campaign isn’t historically unique in this respect. In 1953, the CIA’s orchestration of a coup d’état that deposed Iran’s democratically elected and secular Prime Minister Mohammad Mosaddegh in many ways laid the groundwork for a longer pattern.

Today, once again, democracy in the politically tumultuous Middle East proves more elusive than ever, even as discontent grows. The region has repeatedly been rocked by pro-reform or democracy protests. But these are disorganized masses who face a much more organized, politically hardened elite. So, it may be true, as our Iranian friend said, that real change will take another 30 years to transpire.