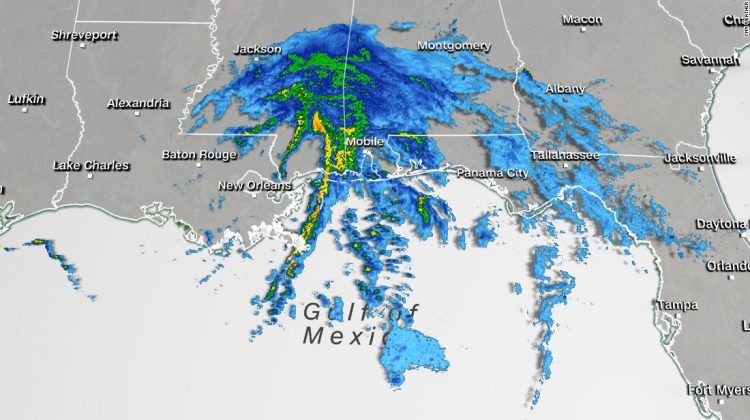 Claudette, previously referred to as Potential Tropical Cyclone Three, upgraded to a tropical storm in the early morning hours.

The center of the storm was about 45 miles southeast of New Orleans early Saturday. The maximum sustained winds are at 45 mph, according to NHC.

Tropical storm warnings remain unchanged throughout the region, and the main threats are heavy rainfall and tropical-storm-force winds.

Claudette is forecast to weaken into a tropical depression by tonight and become post-tropical on Sunday. The system is then forecast to re-develop over the western Atlantic Ocean on Monday as it moves away from the East Coast of the US.

Parts of Louisiana were bombarded with more than 9 inches of rain Friday into early Saturday, according to CNN meteorologist Robert Shackelford.

Residents have prepared over the last couple days for the storm. In New Orleans, Cara McCarthy was moving her Toyota Prius to higher ground.

“I loaded up a bunch of sand and I am going to put them around my pens, that way my dogs aren’t in knee high water,” Michael Fahey, a Hancock County, Mississippi, resident told WLOX.

A tornado watch was issued for the Gulf Coast including parts of Alabama, Mississippi, and the panhandle of Florida until 11 a.m. Central time, according to the Storm Prediction Center. Some of the cities under that watch are Gulfport, Mississippi; Mobile, Alabama; and Pensacola, Florida.

The threat of tornadoes will remain as storm system moves inland, though they are expected to be short and weaker.

More than 20 million across the South were under flash flood watch, with some areas expecting 2-10 inches of rain until the storm system moves to the East Coast.