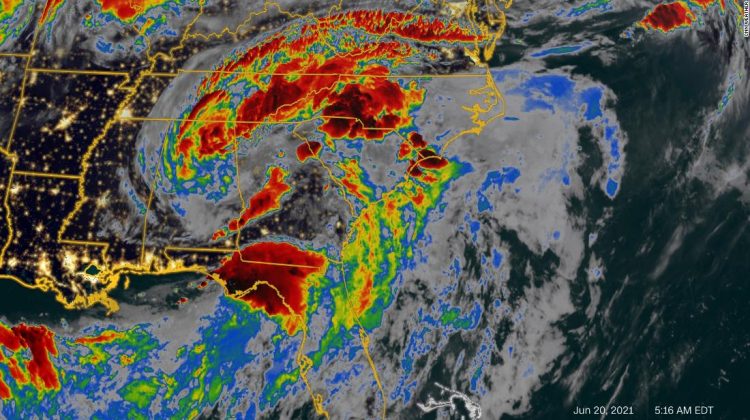 Claudette was was located about 85 miles west-southwest of Atlanta as of 5 a.m. Sunday, according to the National Hurricane Center (NHC).

The storm is packing the potential for isolated tornadoes, flash flooding and gusty winds.

The tropical depression, which had maximum sustained winds of 30 mph early Sunday, is expected to restrengthen into a tropical storm by early Monday morning as it sweeps across North Carolina and into the western Atlantic.

Much of the North Carolina coast, from Little River Inlet to Duck, including Pamlico and Albemarle Sounds, is under a tropical storm warning, according to the NHC.

As Claudette moves off the East Coast, a storm surge of 1-3 feet is possible from the North Carolina-Virginia border south to Little Inlet, SC.

A tropical storm watch has been issued for areas of South Carolina, from South Santee River to Little River Inlet, which could see worsening conditions late Sunday or early Monday.

Parts of Alabama, Georgia and northern Florida will see heavy rain from the system throughout Sunday.

Claudette weakened but may regain strength

After the Gulf storm made landfall, it weakened into a tropical depression Saturday, but downpours still hammered the region.

Flash flooding was reported in parts of Mississippi, Alabama and the Florida Panhandle as of early Saturday afternoon, the National Weather Service said.

Tornado reported in Alabama on Saturday

As Claudette raged as a tropical storm Saturday morning, a tornado hit the southern Alabama community of East Brewton, the Brewton Fire Department said, according to the National Weather Service.

Pictures from resident Alicia Jossey showed debris from downed trees and other materials strewn across East Brewton, a community of about 2,900 residents near the Florida state line in Escambia County.

Three people in Escambia County were injured by the tornado, according to the county’s Emergency Management Agency. The tornado also damaged several homes, and law enforcement closed US Highway 29 in East Brewton because of power lines in the roadway.

Jossey told CNN affiliate WPMI she had just enough time to get her 17-year-old son and their pets to hunker down in the middle of the house. When the storm passed and they emerged, she was “in shock.”

“I have peoples’ hats on my front porch and I have frames from people’s houses and little things like caulk from somebody working on something,” she said. “I have half of someone’s car seat in my backyard.”