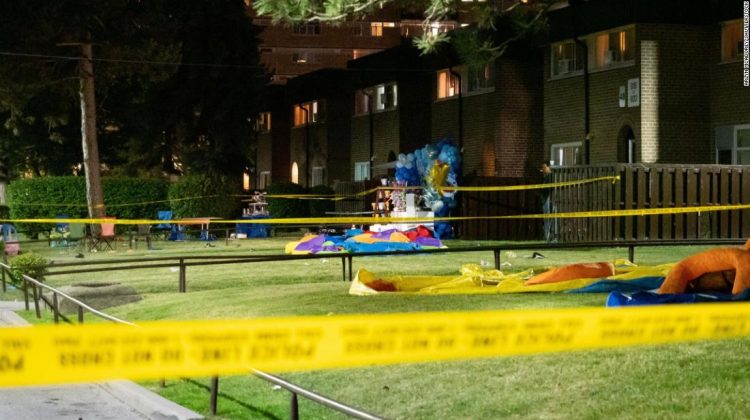 The victims include a 1-year-old boy, a 5-year-old girl, an 11-year-old boy and a 23-year-old man, Toronto Police spokesperson Alex Li told CNN. All were hospitalized with varying degrees of injuries, Li said.

According to CNN newsgathering partner CTV, Toronto Police Superintendent Ron Taverner said the 1-year-old was grazed by a bullet, while the man was shot in the leg. Taverner did not characterize the other injuries.

An investigation into the shooting, which occurred just before 8 p.m. Saturday local time, is ongoing, Li said, “and police are appealing to the public and witnesses to come forward with information to assist in the investigation.”

The motive remains unknown. Per CTV, Taverner said that while the investigation is in its early stages, “it doesn’t look like any of the people that were shot were particularly targeted.”

“It seems like they were just there and happened to be — ended up being shot by the shooters.”

Taverner said a vehicle was seen speeding away from the scene. Police are interviewing local residents, who are cooperating.

Toronto Mayor John Tory condemned the shooting, which he said occurred at a child’s birthday party, calling it a “shocking and outrageous act of gun violence.”

“Firing a gun anywhere anytime in the City of Toronto is unacceptable,” Tory said in a statement, adding, “Doing so at a child’s birthday party goes way beyond that.”