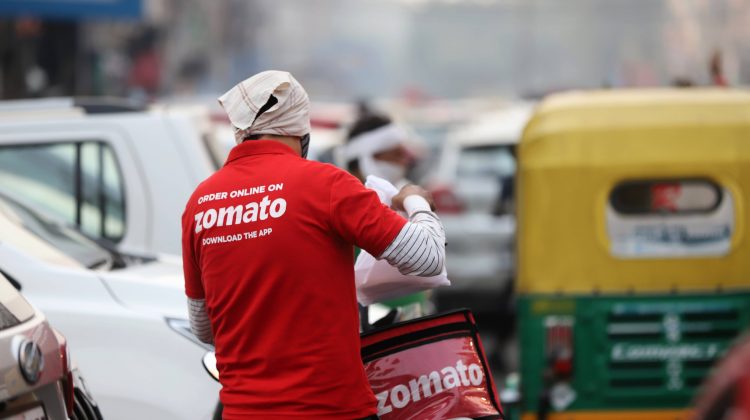 A Zomato Delivery boy keeps adjusts a food order in his Delivery bike amid Covid-19 (Coronavirus) Pandemic in New Delhi, India on 08 November 2020.

Indian internet company Info Edge is not planning to sell its entire stake in Zomato when the food delivery start-up is publicly listed, a senior executive said.

Zomato in April filed for an initial public offering of up to 82.5 billion rupees ($1.1 billion), where the company will issue fresh shares worth up to 75 billion rupees. The company said it plans to use the proceeds to fund organic and inorganic growth initiatives, which may include mergers or takeovers.

Info Edge, which is the largest shareholder in the start-up, will sell shares worth up to 7.5 billion rupees ($101 million), the company said in a stock exchange filing in April.

“We are continuing to invest in Zomato, we are not going to sell our entire stake,” Chintan Thakkar, CFO and executive director at Info Edge, told CNBC’s “Street Signs Asia” on Tuesday.

Info Edge was the first institutional investor to back Zomato and currently holds around 17% stake in the start-up, according to Thakkar. Other shareholders include ride-hailing giant Uber, Alibaba affiliate Ant Group and Singapore state investor Temasek.

“What we have announced is that we can go up to $100 million,” he said referring to the amount of Zomato shares Info Edge could sell. “We still have the option to even not do $100 million.”

“Most of our holding is likely to continue in Zomato, so, we will remain invested in them,” Thakkar said.

Thakkar declined to reveal when Zomato’s IPO might happen.

He said that whatever windfall Info Edge gets from the offering will be added to existing funds that will likely be deployed into the firm’s operating businesses and may be used to buy or take a strategic minority stake in potential medium-sized companies.

Info Edge will look mostly at tech start-ups or “anything which has a sizeable market and which can disrupt the existing market,” he added.

The company also said the pandemic had a significant business impact last year due to lockdowns, when most restaurants temporarily shut down, while many customers were unwilling to order food from outside. Zomato said its revenues from dining-out services were also severely affected.

In February, Zomato said it raised $250 million from backers including Tiger Global Management and Fidelity. That was months after closing a $660 million financing round.