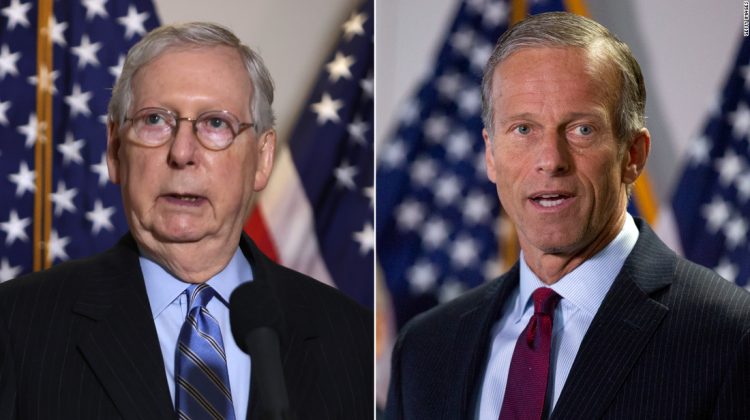 But Senate Minority Whip John Thune, the second-ranking member of the GOP leadership, disagreed and said, “Obviously, this warrants further review and investigation.”

“Some of the allegations that have been made, I think it needs to be looked at, yeah,” Thune said. “The information data that was grabbed from people on the Hill and others. That’s something we need to know. How did they get that information? I assume the committees will work through that.”

The South Dakota Republican is influential in his conference but not a member of the evenly split Senate Judiciary Committee and therefore will not have a say if the committee votes to issue subpoenas. Democrats would need at least one Republican to vote with them or they won’t be able to issue subpoenas.

Top Democrats want Trump’s former attorneys general, William Barr and Jeff Sessions, to be subpoenaed if they don’t’ agree to testify before the Judiciary Committee about subpoenas their department secured targeting Democratic Reps. Adam Schiff, the chairman of the House Intelligence Committee, and Eric Swalwell, a member of the committee, along with their aides and family members.

“We’re all interested in what went on and hopefully this will shed light on it,” Thune said of the Judiciary Committee looking into the issue. “I suspect they will be and the question of whether they’re going to issue subpoenas is something the committee is going to have to decide based on what they’re looking at. Obviously, this warrants further review and investigation, and I’m glad they’re doing it.”

Thune said he had not discussed the issue with McConnell, who earlier went to the Senate floor to blast Democrats for what he called a “which hunt in the making” by going after Barr, who he defended as having served with “honor and integrity.”

“Here are the facts: The Department of Justice is empowered to investigate criminal conduct by members of Congress and their staff,” the Kentucky Republican said. “Necessarily, this sort of investigation is subject to strict procedural protections. And the department’s inspector general is fully equipped to determine whether those procedures were followed in this case. I am confident that the existing inquiry will uncover the truth. There is no need for a partisan circus here in Congress.”

Sen. John Cornyn, a Republican from Texas who’s a member of the Judiciary Committee, seemed to side with McConnell’s thinking.

“It’s a court proceeding and the judge is going to decide if it is appropriate or not,” he said. “So there’s not much of a role for us to play.”

Asked if he is concerned about an abuse of power, Cornyn said, “I defer to the court.”

Sen. Rick Scott of Florida, who chairs the Senate Republicans campaign committee but is not a Judiciary member, told CNN he couldn’t comment because he didn’t know the details of the matter.

“I haven’t seen any of the details,” Scott said. “I’ll have to look at them. I’ve heard the reports.”

Sen. Josh Hawley, a Republican from Missouri who’s a member of the Judiciary Committee, said until he learns more about what happened he doesn’t know yet if the Justice Department’s actions were appropriate.

“I don’t know yet. I don’t have enough information to know. But it’s something we want to take seriously, because DOJ does have that power, and it can be appropriate, but you know you want to do that in like very rare circumstances, and it needs to be appropriate. I don’t know if it was or not,” he said.

Sen. Thom Tillis, a Republican from North Carolina who’s a member of the Judiciary Committee, said it was “an interesting question” when asked if Barr and Sessions should be subpoenaed.

“That’ll be a decision ultimately made between the chair and the ranking member. But there are some interesting questions there. But I’ll defer to them on bringing them before our committee,” he said.

Asked if she would support subpoenaing Barr and Sessions, Sen. Marsha Blackburn, a Republican from Tennessee and member of the Judiciary Committee, replied, “I’m not going to talk about that today,” as she ran onto the Senate floor for a vote.

CNN reached out to the office of Sen. Ben Sasse, a Republican from Nebraska and member of the Judiciary Committee, to see if he supports subpoenas of Barr and Sessions, but his staff did not respond.