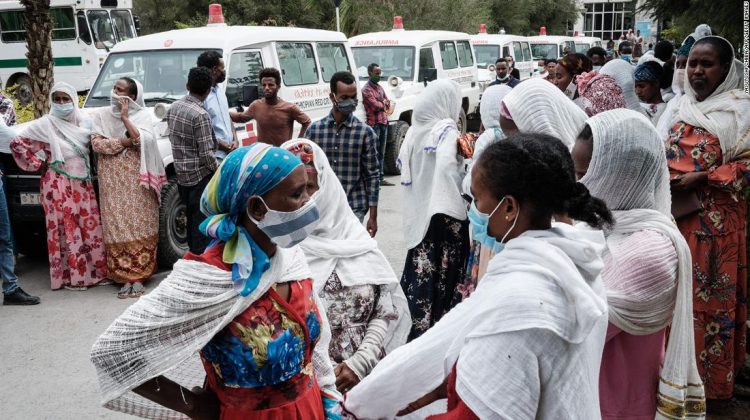 At least 30 people died on Tuesday when a government airstrike hit a busy marketplace in the small town of Togoga, west of the regional capital Mekele, as fighting intensified between Tigray’s ruling party, the TPLF, and forces aligned with Ethiopia’s military, eyewitnesses and medics told CNN.

The airstrike marked one of the deadliest attacks in an eight-month war that has fueled famine, forced millions to flee and severely damaged the reputation of Ethiopia’s Nobel Peace Prize-winning Prime Minister Abiy Ahmed.

Abiy touted the national and regional elections — a vote he described as “witnessing the atmosphere of democracy,” though millions of Ethiopians could not cast their ballots — in an attempt to distract from international criticisms of the war in Tigray, particularly widespread reports of massacres, sexual violence and ethnic cleansing.

But Tuesday’s attack has once again raised alarms over human rights violations in the country.

The State Department said Wednesday that the United States was “gravely concerned” by the reports.

“We strongly condemn this reprehensible act,” spokesman Ned Price wrote in a statement, adding that there were also credible reports security forces had denied medical personnel access to the victims.

“This is yet another attack adding up to the horrific series of International Humanitarian Law and human rights violations, atrocities, ethnic violence, combined with serious allegations of use of starvation and sexual violence as weapons of conflict,” representatives of the European External Action Service said in a joint statement.

“The EU strongly condemns the deliberate targeting of civilians.”

Ethiopia’s military on Thursday denied that it targeted civilians in the airstrike, after initially claiming that it had no involvement in the attack.

Ethiopian Military spokesman Col. Getinet Adane told CNN that the combatants in Togoga were dressed in civilian clothes and were not inside a market.

The spokesman said ambulances were blocked from the scene for their own safety, and were allowed access once the fighting had calmed. He also made a wild allegation that people being treated in nearby hospitals were “actors” faking injuries in an attempt to overshadow the election.

CNN was unable to independently verify his claims.

Medical sources told CNN that ambulances traveling from Mekelle to the scene were barred by military officials, who accused them of attempting to help the Tigray Defense Forces — the armed wing of the TPLF. A team of doctors were also shot at by the military on Tuesday evening, eyewitnesses said.

The International Committee of the Red Cross said it was able to facilitate the evacuation of wounded people from Togoga, transporting them in ambulances to Ayder Referral hospital in Mekelle, where they were receiving treatment.

The deadly incident comes amid an intensification of fighting in Tigray in recent days, exacerbating a mounting human rights crisis.

Thousands of people have been killed, 2 million displaced and pockets of the country pushed into famine since last November, when Abiy, who was awarded the Nobel Peace Prize in 2019 for resolving a long-running conflict with neighboring Eritrea, launched a major military operation against the TPLF.

The clash, which has deteriorated into a protracted conflict that, by many accounts, bears the hallmarks of genocide, was the culmination of escalating tensions between the two sides. Those tensions reached an inflection point in September, when the Tigrayans defied Abiy by going ahead with regional parliamentary elections that had been delayed due to the coronavirus pandemic. Abiy called the vote illegal, and lawmakers cut funding to the region.

The official national and regional elections finally went ahead on Monday, but voting did not take place in a number of constituencies, due to the ongoing conflict in Tigray, ethnic violence in other regions and logistical constraints.

Speaking to journalists after he voted on Monday, Abiy said he hoped it would be the “best election in our history.” When asked about the looming famine in Tigray, Abiy told a BBC journalist “there is no hunger in Tigray.”