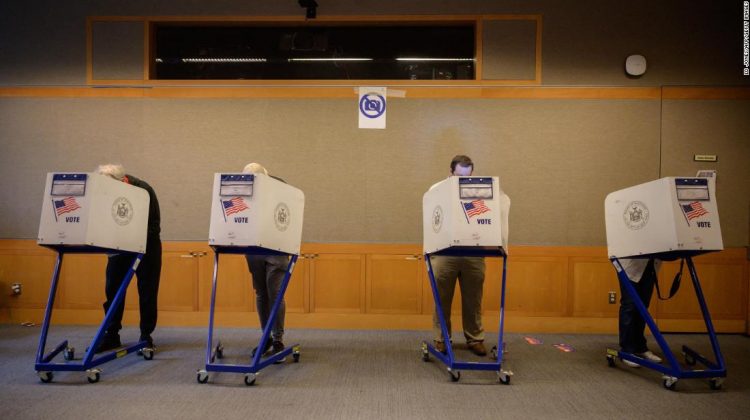 The same poll found that when ranked choice voting was applied that Adams defeated Garcia 56% to 44% in the final round.

Pretty much every other public poll puts Adams on top in voters’ first choice, but other surveys show anything from a large Adams lead to a small Garcia advantage in the final round.

What’s the point: With the primary on Tuesday, the word “mess” is the only real way to describe the Democratic mayoral primary in the country’s most populated and heavily Democratic city.

There are a lot of candidates (eight of whom qualified for the final debate last week), a new ranked choice system where voters get to rank up to five candidates if they want, and low turnout is likely.

Adams is the favorite, but the race remains within the margin of error. It does seem likely, however, that this election will be another 2021 election where Democratic primary voters will select a relatively moderate candidate.

When you look at the Marist poll, it becomes clear that Adams is recreating President Joe Biden’s 2020 primary coalition to a large extent. In round one, he is winning among Black voters (with 43% and nobody else above 11%), while in fourth place among White voters (with just 12%). Adams is crushing voters ages 45 and older (with 29%), as he is tied for third with voters younger than 45 (with 14%).

Additionally, Adams is at 42% among conservative primary voters and 29% among moderates. He’s at a mere 11% among very liberals.

The candidate who seems to have the second best chance of winning at this point (Garcia) is more toward the ideological center. She does best (25%) among the candidates among the biggest bloc in the electorate, regular liberals.

Both Adams and Garcia trail among very liberals to Wiley (34%), who has mostly coalesced the left-wing part of the party.

The problem for Wiley is the very liberal portion of the electorate is relatively small (19% in the Marist poll). The moderate and conservative bloc combined are 45% and the regular liberal portion is 36%.

As I’ve noted over and over again, the Democratic electorate is a lot more moderate than people assume. Crime and public safety have consistently ranked as the top issue for voters, which has been a big advantage for Adams who is running as a law and order candidate.

There are two reasons why this race is hard to predict, though. First, Adams’ polling position for initial preferences at this point is the weakest for a New York City Democratic primary frontrunner since the pivotal 1977 race. It shouldn’t shock anyone if Adams actually doesn’t have the most votes after round one.

For the first time ever, primary voters get to rank up to five candidates. If after the first round no candidate has a majority (and it’s very likely no one will), the candidate with the lowest vote total is eliminated. Her or his supporters will have their votes reallocated to the second choice. This elimination process runs itself through the different ballots until one candidate reaches a majority of the overall vote.

Voters trying to pin down their first choice in a primary is already difficult where voters can’t just rely on partisan cues. Pollsters have been asking them to pin down their second, third, fourth and fifth choice. Combine that all with the fact that this system is new, and this is a recipe for wild swings in final rounds from poll to poll.

Consider Yang’s voters. In the Marist poll, they’re most likely to list Adams as their second choice. This shouldn’t be too surprising because his supporters are more likely to be moderate than liberal.

Yang voters, though, are also more likely to be younger than older.

New York City Comptroller Scott Stringer, who is generally fifth in the polls, has more liberal, but older supporters. The Marist poll shows his 7% of the vote most likely to go to Adams.

The second choice of those who rank Wiley and Garcia first, on the other hand, are each other in the Marist poll, despite conventional wisdom putting them in different ideological camps. Why? For one thing, they both do overwhelmingly well with college-educated voters.

What we don’t know is whether voters’ second and third choices will end up being more correlated with ideology, age, race, etc. It’s likely to differ from candidate to candidate.

Most polling does indicate Adams is ahead once ranked choice voting takes place, but caution is warranted in this new system.

What we do know is that it will likely take a while to count the ballots because of ranked choice voting. The New York City Board of Elections says we won’t know the winner until at least a week after the election.

The winner will then be heavily favored in the fall general election to be the next mayor.