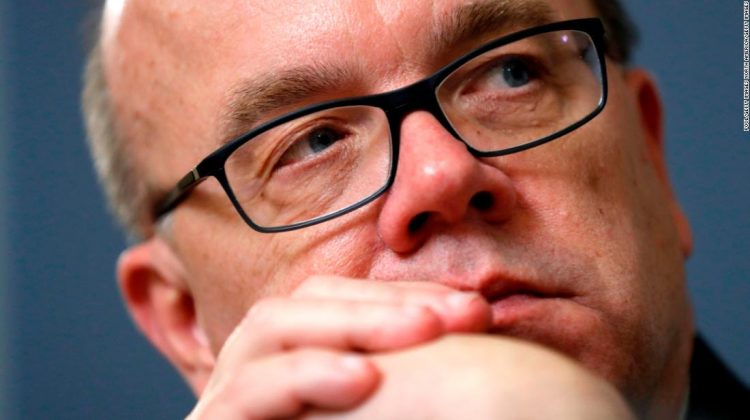 That phrase means more to him than just words on a mask. It’s part of his lifelong fight to end food insecurity in the country, a task he’s been working on since he entered Congress in 1997.

The Massachusetts congressman has been working closely with his Democratic colleagues in an effort to put an end to food insecurity in the country.

He plans to introduce legislation alongside New Jersey Sen. Cory Booker that would mandate the White House to create a conference that would work to try to end hunger in the United States.

McGovern said he believes he’s uniquely positioned to tackle this issue because he chairs the House Rules committee, which doesn’t have any jurisdictional barriers for legislation.

He said the Rules Committee plans to operate as an unofficial select committee on nutrition and human needs in the next couple of weeks.

Data from the US Census Bureau this year shows the percentage of adults living in households that sometimes or often did not have enough to eat decreased to just over 8% in April, which is down from almost 11% in March. But before the pandemic, data revealed more than 35 million people were food insecure in America, which included 10 million children.

On the ground in Philadelphia

McGovern and Rep. Mary Gay Scanlon of Pennsylvania both sported caps and sensible shoes while walking through the Sankofa community farm at Bartram’s Garden in Philadelphia for their first in-person events with colleagues since the pandemic began.

The two heard from locals in Scanlon’s district about the role the garden plays for its predominantly African-American community who needed its services during the pandemic.

They were later joined by Democratic Rep. Dwight Evans, also of Pennsylvania, for a roundtable with locals about their efforts to help the surrounding low-income community with food insecurity.

“All of us here have had the experience of hungry children and if that doesn’t break your heart, then I don’t think you’re human,” McGovern said during a round table with local officials after the tour of the community garden.

His interest in ending food insecurity began when he interned for Sen. George McGovern (no relation) who was the then-chairman of the Senate Select Committee on Nutrition and Human Needs.

Out of that specific White House conference came the solution for a food stamp program, now known as the Supplemental Nutrition Assistance Program, more commonly known as SNAP, and Women, Infants and Children’s Program (WIC), as well as other programs helping hungry Americans.

Efforts to end food insecurity in the United States were bipartisan at the time, with then-Republican Sen. Bob Dole of Kansas working on the committee with Sen. McGovern in the Nixon administration.

Dole recently sent McGovern a letter praising him for his efforts to end food hunger.

McGovern and Scanlon both said they believe there is a sense of urgency with the issue of ending food insecurity, considering Democrats have majorities in both the House and Senate and Joe Biden is in the White House.

“The stars are aligned. We have to do something big in the next year and a half,” he said but clarified there doesn’t need to be legislation for the White House to create a conference on hunger.

“The White House could do this on their own, they don’t need us to mandate them to do it,” McGovern added.

Scanlon added there’s “the fierce urgency of now” that the pandemic has made Americans aware of food insecurity.

“We have had this widening wealth gap in the country, we’ve seen the income inequality increasing, and as someone suggested today, the fact of the pandemic really exposed how hungry people are in this country,” Scanlon said. “So let’s make sure that while people are still aware of this, while they’re still giving to their food pantries, they realize that this is a continuing issue and we need to address it upfront.”

McGovern said he knows of several Cabinet officials who are in support of the White House conference and has begun discussions with administration officials on the issue.

He also asked the Appropriations Committee to designate $2.5 million dollars to fund a White House conference in next year’s budget.

When it comes to what Congress can do now to help Americans in need, McGovern and Scanlon said Democrats’ priority is to make the child tax credit permanent and extend the 15% increase in SNAP benefits past September that came with the most recent Covid-19 stimulus package.

He said he’s trying to encourage more Republicans to get on board with his efforts and is optimistic.

“I mean like, you might say, who the hell’s for hunger? I mean, now there may be a few in this current Congress that are, but, you know, we’re not we’re not saying, here are the answers the conference needs to produce. What we’re saying is, for example, the community garden we just saw here. I mean, that’s incredible. It’s wonderful, you know, and it’s benefiting a lot of families in a neighborhood where, quite frankly, there’s no, it’s not always easy to get access to fresh vegetables.”

Now that most lawmakers are vaccinated against Covid-19, they’re not required to wear a face mask anymore, which means McGovern hasn’t been seen spotted in his iconic mask in recent weeks.

When what that means for his sending a message in food hunger, McGovern responded jokingly: “Even some people I don’t want to talk to (about this issue) I’ll have to talk to I guess!”