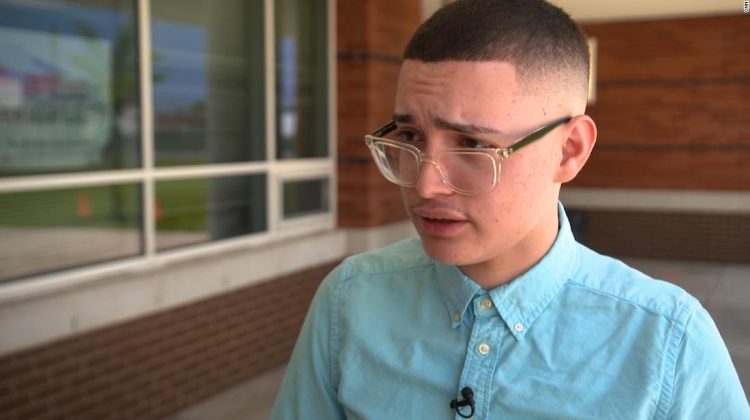 When students were sent home and everyone switched to virtual learning, he tried to make do as best as he could.

“I did my schoolwork on my phone for two or three months,” he told CNN.

“That was horrible — having to navigate from Google Classroom to the Google documents back to Google Classroom.” He would display documents on his TV screen to see them before going back to tapping on his phone.

Echevarria’s work suffered. “My grades went down tremendously, all across the board,” he said.

His school district in Camden got him a laptop for his junior year, but he struggled with motivation.

“There were many times where I felt like calling quits on education.”

Echevarria’s problems were recognized by his teachers at the Creative Arts Morgan Village Academy, who reached out to get him back on track.

But he is far from alone, and many students may not be able to bounce back so strongly.

Katrina McCombs, superintendent of the Camden City Schools District, rues that the local dynamic of graduations versus dropouts had been going in the right direction before last year. Now, the disruption of the pandemic can start to be measured.

“Just like the rest of the students across the state of New Jersey, we’re looking at about a 30 percentage point drop in performance, focused on mastering standards,” she said.

“And we know it’s important for students to master skills in their grade levels, as they’re matriculating up, to set them up to be able to successfully graduate later.”

The district plans to use extra funding from the federal rescue plan as well as the state to have more teachers spending time with students who need the help.

“The key is teamwork,” said Nicole Harrigan, principal of the K-8 H.B. Wilson Family School, also in Camden. “It has to be the students, the parents, the administration, the teachers, all of us working together to do this work, to get them where they need to be. As long as we all work together, it’s possible to help them. Now they may not be where they should be, but they can get closer to where they need to be.”

Schools in Camden, one of the poorer areas of New Jersey, were closed for more than a year while in other parts of the country classes got back sooner. And that could impact students.

“What we anticipate is the longer students have been out, the longer they’ve been faced with virtual instruction, the more severe the impact is likely to be,” said Sandy Addis, Chairman of the National Dropout Prevention Center.
“The long-term impact of this pandemic shutdown is going to be much more than one year. Students across all grade levels have experienced learning loss. And it’s not just the learning loss for this current year. Many of them have lost ground developmentally, particularly younger kids,” he warned.

While the academic loss may show up in grades, Addis said solutions were not as simple as teaching our way out of the problems. Children have also lost emotional and social skills and, for some, school may have been the best and safest part of their day. Losing that will have taken a toll.

Addis stressed it was important to keep children with the rest of their peers rather than retaining them to repeat a grade, calling retention the “kiss of death for graduation.”

Students who are a year older than the rest of their classmates feel out of place, and are at far more risk of dropping out in higher grades, he said. And that could keep the impact of the pandemic affecting children years after they have returned to the classroom.

Echevarria, the New Jersey teen, is again looking at graduating on time as part of his high school’s Class of 2022. He says he’s now more confident having got past the challenges of virtual learning.

But he wants his senior year to be in the classroom and sounds almost wistful about the school building he’s been out of since March 2020.

“Walking through those hallways sets your mind that you’re in school, you’re here to learn,” he said.