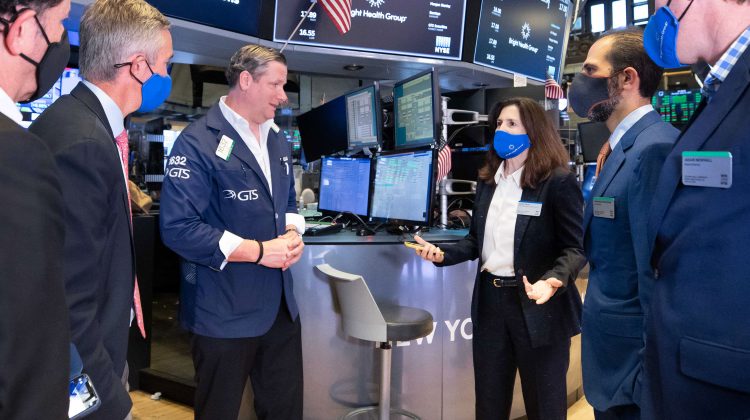 One of the biggest fears investors have faced this year is the threat that inflation could run amok and thwart the post-pandemic economic recovery.

But over the past month, those fears have abated significantly, and a chart diagramming the trend could be signaling the next leg up in the stock market.

A popular measure of market anticipation for inflation is the difference between Treasury yields and inflation-indexed bonds of the same duration. The metric is known as the “breakeven” rate, and investors and economists most often look at the 5- and 10-year spreads.

After rising in May to their highest levels in about eight years, those breakeven rates have been falling consistently, indicating that investors no longer see inflation maintaining its current blistering pace far into the future. The 5-year breakeven rate is now at 2.45% while the 10-year sits at 2.33%, indicating that markets see inflation falling over a longer time frame.

“To us, this signals that markets are starting to give up on the idea of structurally higher US inflation,” wrote Nick Colas, co-founder of DataTrek Research. “Looking into the back half of 2021, this may well be the single most important data point to watch.”

Inflation is important to investors because higher prices can eat into company profits.

But those price pressures also can signal that the economy is running too hot, and that in turn can cause the Federal Reserve to start tightening monetary policy. That would mean higher interest rates and the likelihood that the central bank would turn off the spigots on its monthly bond buying program, which currently is running at a pace of at least $120 billion.

Fed officials, though, have been steadfast in their view that the current spate of inflation is “transitory.” The assertions come even though the personal consumption expenditures price index, which is the Fed’s preferred inflation gauge, increased 3.4% year over year in May excluding food and energy prices. Headline consumer price index inflation ran at a 5% clip for the month.

Those levels are well above the Fed’s 2% goal, and some officials have conceded that inflation has been stronger and more persistent than they had anticipated.

Richmond Fed President Thomas Barkin said Monday that market-based inflation measures like the breakeven rates “at least give me some comfort” that expectations are for a cooling-off in the long run. But he added Tuesday that the current pace “reasonably” meets the Fed’s “substantial further progress” inflation goal, even while the labor market is falling short.

To be sure, the inflation question is far from settled.

Mohamed El-Erian, the Allianz chief economic advisor, warned Monday on CNBC that the Fed is falling behind the inflation curve and may be forced to tighten policy quickly, potentially causing a recession down the road. Market heavyweights such as hedge fund billionaire Paul Tudor Jones and Bank of America CEO Brian Moynihan have called on the Fed to take its foot off the pedal as inflation increases.

But from the market’s perspective, Treasury yields have been dropping consistently and stocks have continued to set a succession of new records.

“If inflation expectations start to pick up again, markets will rightly worry if the Federal Reserve will have to raise rates sooner. If they continue to trend lower, then the market’s expectation of one rate increase in 2022 will be a safe assumption,” Colas wrote.

At their June meeting, Fed officials did pull forward their expectations for the next rate hike to 2023, but it was a narrow miss for 2022 and market participants think an increase could come earlier than the central bank forecasters anticipate.

Colas sees a solid path ahead for stocks, based on a low-inflation environment combined with an accommodative Fed and a solid earnings picture.

Analysts collectively see a 12.2% gain for the S&P 500 over the next 12 months. Colas said he remains most bullish on energy and financials.