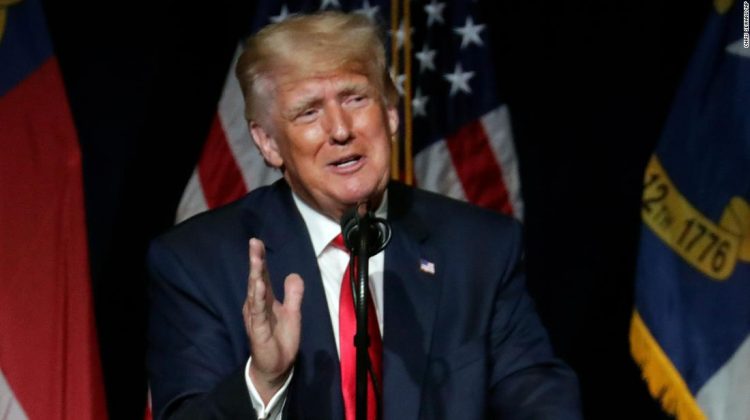 It’s as if the fawning over Vladimir Putin never happened. Or Trump’s assurance that Covid-19 would simply “go away” never passed his lips. Trump’s acolytes have, meanwhile, rebranded the worst assault in American democracy in modern times into a January 6 tourist jaunt as they seek to cleanse the reputation of the former President who told rioters to “fight like Hell” and, months later, still holds enormous sway over the GOP.

The California Republican criticized Biden for failing to stand up for US national interests and not making clear the US will “hold Russia accountable for its long list of transgressions. … President Biden gave Vladimir Putin a pass,” McCarthy wrote in a statement. His main point was that Biden failed to make Moscow pay a price for a string of ransomware attacks on US infrastructure believed to originate on Russian soil.

McCarthy didn’t mention two intelligence operations by Russia to meddle in US elections to help Trump win. Nor did he mention Trump’s notorious press conference in Helsinki when the then-President threw US spy agencies under the bus on live television and embraced the denials of Putin, a former KGB officer, on election interference. Trump’s former top Russia adviser, Fiona Hill, told CNN this week that she considered faking a medical emergency to stop the press conference in 2018 since it was so excruciating and damaging to US interests.

Trump, always the perpetrator of the most outrageous big lie, weighed in himself on Wednesday with one of his favorite interviewers, Fox’s Sean Hannity, assailing Biden’s handling of the summit.

“We did not get anything, we gave a very big stage to Russia and we got nothing,” Trump said, highlighting his own tendency to view diplomacy as a sequence of photo ops with him as the star by slamming Biden’s “performance art” and saying it was a “good day for Russia.”

Trump’s critique of his successor was especially ironic, because the key criticism of his meetings with tyrant Kim Jong Un was that he ceded the prize North Korean leaders have craved for decades — recognition on a platform alongside the US leader — while failing to slow Pyongyang’s nuclear program.

In the most flagrant example of historic revisionism, some Republican lawmakers are now actively denying the heroism of officers who defended them from the insurrectionists on Capitol Hill. And by refusing to probe the invasion and by actively misrepresenting Trump’s incitement of a mob attack on January 6, his allies are trying to cleanse his reputation as he eyes a comeback. The fury that led to the sickening assault on Congress was brewed by Trump’s baseless lies about election fraud, which continue to wreak havoc on American democracy by inspiring restrictive voting bills in the states.

The former President dictated the new narrative himself in a political appearance in North Carolina earlier this month, with the most outrageous lie so far in his post presidency: “Remember, I am not the one trying to undermine American democracy. I’m the one that’s trying to save it.”

The Republican effort to cover up the truth of Trump’s attempt to disrupt the certification of Biden’s victory started within hours of the Capitol insurrection.

It has now reached absurd but also dangerous lengths. Multiple Republicans have said the militant anti-facist group antifa is to blame rather than the former President’s supporters in their MAGA hats who waved Trump flags. Georgia Rep. Andrew Clyde, a Republican freshman, claimed the mob scenes were just a “normal tourist visit.”

A DC Metropolitan police officer who was stun gunned and beaten as he tried to defend the Capitol on January 6 said that Clyde had refused to shake his hand when they met in the Capitol this week. But Michael Fanone vowed not to stop debunking GOP historical revisionism over the attack.

“Your words have consequences, congressman,” Fanone said on CNN’s “New Day” on Thursday. “You’re lying about what happened on January 6 and I’m going to be there to confront anyone who lies about January 6.”

Fanone spoke out as the Justice Department released horrifying new footage of the attack on the Capitol. One sequence shows one accused rioter, Thomas Webster, among a large crowd of Trump fans, threateningly wielding a flagpole and finally rushing at officers who engaged in hand-to-hand combat with him and other members of the mob.
Meanwhile, several GOP lawmakers who idolize Trump — including Reps. Matt Gaetz of Florida and Marjorie Taylor Greene of Georgia — have amplified a baseless conspiracy theory highlighted by Fox News opinion host Tucker Carlson that the Capitol riot was a false flag conspiracy orchestrated by the FBI.
And earlier this week, more than 20 House Republicans voted against legislation to award the Congressional Gold Medal to the officers who defended the Capitol, with some, like Greene, saying they opposed the use of the world “insurrection” in the legislation to describe what happened that day. That revisionism was undercut once again on Thursday when the Justice Department charged a Capitol rioter with bringing a handgun onto Capitol grounds.

The attempt to make voters forget — or at least to give the Trump base the cover of a more comforting alternative reality — is not just an attempt to cover embarrassment or to protect the reputation of Trump, who still wields vast power inside the GOP. There are electoral considerations too. Several Republican senators, for instance, openly admitted that they were opposed to a bipartisan, independent commission investigating the insurrection — filibustered by the party in the Senate — because it would detract from an attempt to make the midterm elections a referendum on Biden’s presidency.

Their decision did not just deprive the country of a moment of catharsis after a national trauma and of recommendations that might stop it from happening again. It also meant that there will be no agreed, contemporary historic record of a day of infamy on which five people died and democracy was defiled.

“The truth of what happened that day is an inconvenience for Republicans and it’s an embarrassment, it contradicts the political narrative they believe is most favorable to them,” former FBI deputy director Andrew McCabe said on CNN on Thursday.

Another deep stain on Trump’s record is the pandemic that he denied, mismanaged and politicized. In order to make the country forget, Republicans have settled on Fauci, the country’s top infectious diseases specialist, as a scapegoat to lay blame that should be attached to Trump.

The recent release of Fauci’s government emails triggered a coordinated effort by former members of Trump’s administration and the conservative media to blame him for the pandemic’s deadly march across US soil early in 2020.

Fauci, as a government official, deserves scrutiny. Some of his positions in the early months of the worst health crisis in a century, for instance involving the utility of mask wearing and the transmissibility of the disease, did evolve. Unlike Trump’s positions though, they changed on the basis of new scientific evidence rather than politics. The extreme nature of the attacks on Fauci suggest their real purpose — taking the heat off Trump. One of the most respected global public health officials in the world has been slammed as an “activist scientist” and an arm of the Chinese propaganda machine. Fauci, who has said that he believes that natural transmission from animals to humans most likely spread Covid-19, has also been accused of covering up for Beijing over claims the virus escaped from an epidemiological lab in the city of Wuhan.

“He’s been wrong on almost every issue and he was wrong on Wuhan and the lab also,” Trump said in North Carolina earlier this month. The Biden administration is still investigating the fateful genesis of the pandemic in the Chinese city of Wuhan. But some Republicans have demanded Fauci resign over the emails — seeking a scalp that would suggest a non-existent scandal but might serve to drain some of the blame from Trump.

The rewriting of the history of Trump’s tumultuous, one-term administration is perhaps not surprising, since lies and false realities were its most dominant characteristic from its first moments right until the end.

In fact, the strategy — which has now resulted in tens of millions of Americans living in an alternative version of Trump-approved truth — was sketched out as far back as 2018 in Kansas City, when he told his followers not to pay any attention to journalists charting the true story of his presidency.

“What you’re seeing and what you’re reading is not what’s happening.”

Events of the last week show how far the former President has succeeded in co-opting his party into his methodology of deception to such an extent that the facts of the past no longer hold water — which raises real questions about how American democracy can function in the future.

It is a chilling reminder of how a totalitarian government rewrote every book, changed dates and falsified every record in George Orwell’s novel “Nineteen Eighty-Four,” to such a point that “history has stopped” and nothing exists except a present in which the Party is always right.