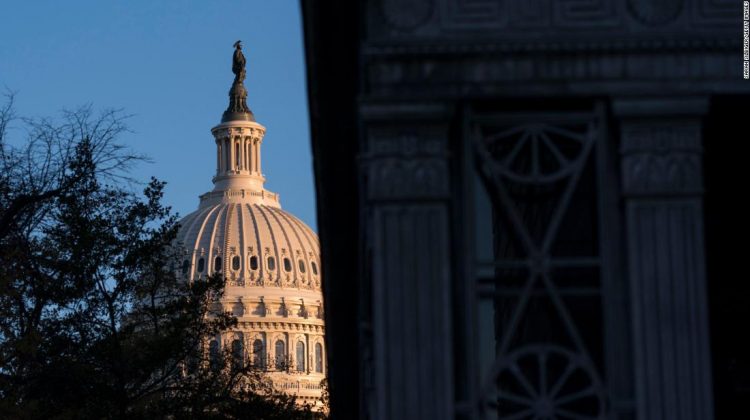 Instead, party leaders in Washington and the states dedicated themselves to enshrining his anti-democratic behavior as GOP orthodoxy and whitewashing events that led to Trump’s disgrace, including his pandemic failures, lies about non-existent major electoral fraud and the Capitol insurrection.
Instead of examining why voters rejected the ex-President after a single term, Republican state legislators drew up bills rooted in his falsehoods about a stolen election that could make it easier to install their preferred victor after future elections — even if voters decide otherwise.

It is in this context that GOP senators this week are expected to block Democratic moves effectively designed to protect a democracy under near-unprecedented assault.

The showdown will come at a critical moment for Joe Biden’s presidency. Delicate negotiations that could produce a bipartisan infrastructure bill may have a narrow path. And a months-long drive for a bipartisan police reform deal is finally creating some optimism for genuine progress. (Biden is also facing increasing unrest among liberal Democrats who fear dreams of a radical, transformative presidency may be evaporating.)

While these legislative issues are vital to Biden’s political agenda, the clash over voting rights touches on something more fundamental to America — the maintenance of its political system.

It is perfectly valid for Republicans to raise objections to the “For the People Act,” which already passed the House and which Democrats are now trying to pass in the Senate. The overhaul bill restores voting rights and expands access to the ballot by introducing automatic voter registration, protecting mail-in voting and establishing nationwide standards for early voting. The idea that this is an overly expansive use of federal power to dictate rules of state elections deserves serious debate. New campaign finance reform proposals included in the bill may face legal impediments. And it’s not clear a one-size-fits-all mandate works everywhere. Some states already believe their systems are superior to anything Washington could impose. Critics also question whether Washington will properly fund a huge overhaul of the election system.
Yet the sincerity of Republican opposition is called into question by the actions of GOP state legislators who are actively undermining US democracy. Most Republican lawmakers in Washington voted to shield Trump from impeachment charges after he incited the mob riot at the Capitol on January 6. And more recently, GOP senators blocked an independent, bipartisan probe into the events of that day.

Claims of vast voter fraud in 2020 — which Republicans say justifies restrictive voting bills from Florida to Texas and Arizona to Michigan — are false. And past statements from GOP leaders, including Trump, that allowing more people to vote will make it harder for Republicans to ever win power reveals a more genuine rationale for GOP opposition.

Republican Sen. Lindsey Graham, for instance, said on Fox News in November, while Trump was disputing the result of a free and fair election that made Joe Biden president, that “if Republicans don’t challenge and change the US election system, there’ll never be another Republican president elected again.”

Senate Majority Leader Chuck Schumer said Sunday that he would schedule a vote on Tuesday on opening debate on voting rights. Republican senators are expected to use the filibuster rule requiring a 60-vote majority for major bills to choke off discussion about voting reform.

Ahead of the showdown, Republican senators on Sunday mobilized to also snuff out a compromise measure from moderate Democratic Sen. Joe Manchin, which surprised many on his side of the aisle last week.

The original For the People Act and Manchin’s alternative are seen by many Democratic activists as the best chance to counter scores of restrictive voting bills, including in swing states.

Sen. Bernie Sanders of Vermont, an independent who caucuses with Democrats, appeared open to Manchin’s approach, which makes Election Day a national holiday, mandates 15 days of early voting, introduces a voter ID requirement — a step Republicans have traditionally supported — expands some mail-in voting and bans the drawing of congressional districts on partisan lines.

While telling CNN’s Dana Bash on “State of the Union” that he prefers the House-passed bill, Sanders didn’t rule out Manchin’s narrower approach.

“Sounds like I’m open to doing everything I can to protect American democracy,” the former presidential candidate said.

“We can disagree on all kinds of issues, but taking away the right of people to participate in American democracy is unacceptable. And the Congress must address that in any and every way,” Sanders added.

Schumer told reporters that he was still in talks with Manchin on his compromise measure — which voting rights champion Stacey Abrams of Georgia also said she’d be open to last week. Getting Manchin on board with a voting rights bill could unite all 50 Democratic senators, a powerful symbolic move.

But Republican senators dug in against any federal overhaul, including Manchin’s proposals.

“Unfortunately, what he does is — what the larger bill S1 does, which is it takes the election system in this country and federalizes it,” Ohio Sen. Rob Portman said on NBC’s “Meet the Press.”

“It’s a federal takeover of our election system.”

Graham also supported the line laid down by Senate Minority Leader Mitch McConnell that no action was permissible in Washington on regulating elections.

“As much as I like Joe Manchin, the answer would be no,” the South Carolina Republican said on “Fox News Sunday” before going on to attack the original bill.

“In my view, SR-1 is the biggest power grab in the history of the country,” Graham said. “They’re trying to fix a problem most Republicans have a different view of.”

The blanket line that Washington has no role in addressing elections allows Republicans to both avoid discussing the hardline positions of their colleagues in the states, Trump’s lies on which they are based and whether the government in Washington really has power to act.

The Constitution does give the initial role to the states in setting the time, locations and conduct of congressional elections. But it does not state that Congress has no role in regulating elections and allows federal lawmakers to enact legislation that supersedes some state rules. There is evidence that the Founders worried that allowing states exclusive power to regulate elections could make them too powerful and introduce unfair electoral criteria that would threaten the unity of the Union. In Federalist 59, for instance, Alexander Hamilton explained the constitutional principle that Congress has the power “to regulate in the last resort, the election of its own members.”

One of the core arguments going forward will be whether electoral laws in the states that threaten the most faithful application of democracy amount to exactly the kind of abuses that Hamilton appeared to have in mind.

According to the non-partisan Brennan Center for Justice, at least 14 states had enacted 22 new laws restricting access to the ballot between the 2020 election and mid-May. At least 61 bills with restrictive measures were moving through 18 state legislatures as of the same point. Republican legislators are in many cases also giving themselves power to overrule non-partisan election officials after voting has been conducted, in measures that seem to codify Trump’s pressure on election officials in states like Georgia to change the result of the last election.

Republican officials have repeatedly suggested that efforts to expand voting would harm their chances of ever winning elections.

And Trump himself said that if more people vote, Republicans will suffer — a warning issued long before the election when he repeatedly opposed Democratic efforts to fund mail-in voting in coronavirus relief bills.

“If you look at before and after, the things they had in there were crazy,” the then-President said on “Fox and Friends” on March 30 last year.

“They had things — levels of voting that if you ever agreed to it, you’d never have a Republican elected in this country again.”