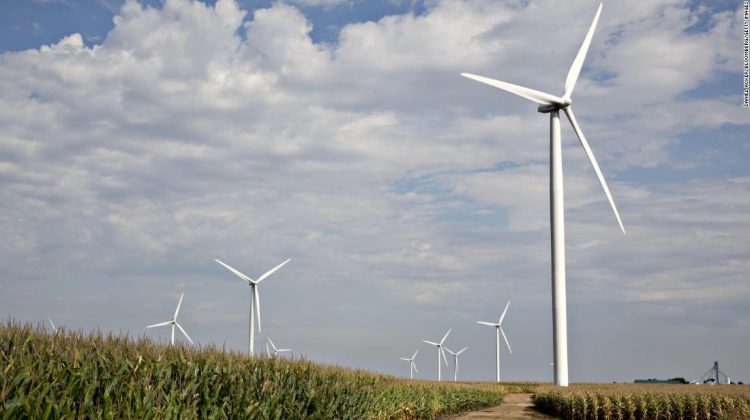 The uncertainly can be frustrating for some on the front lines, but there is still hope — and a recognition that even talk of action on Capitol Hill has been a boon to clean energy businesses, with potential partners and customers all eager to get a piece of the new federal investment.

Plans to harness and transport solar and wind energy are multiplying in the Midwest despite a regulatory backup, including one new, high-profile project seeking to connect a line from Mason City, Iowa, to the Chicago area. And in West Virginia, an electric vehicle company has been inundated with inquiries from both ordinary US commuters seeking cheaper alternatives and foreign governments looking to grow fleets of lean, clean motor bikes.

“The future is now, and now is the time to build out a national electric grid that can deliver clean energy to the cities and towns that need it,” Direct Connect CEO Trey Ward told CNN. “It will be the largest infrastructure project of our lifetime and it will be good for our children.”

Direct Connect is planning to break ground in the next year or so on a high-voltage direct current transmission line that will bring wind and solar energy across the Upper Midwest. The $2.5 billion “SOO Green” project has succeeded thus far where others have failed for two key reasons: It will run underground — meaning no eyesore overhead wiring — and it will be placed along the preexisting Canadian Pacific Railway, largely sidestepping eminent domain disputes with landowners.
As part of the package put forward in his American Jobs Plan, Biden called on Congress to dedicate $100 billion to beefing up the country’s electric power grid. The administration believes it can supercharge the process by offering tax credits to prospective builders, making clean energy projects even more appealing to private industry. In many cases, companies have already begun to pivot from fossil fuels toward green projects.

‘Let us choose it’

Brian Meyer grows corn and soybeans in Monona, Iowa, on a massive plot of farmland his father began working nearly seven decades ago. Meyer supports the construction of the SOO Green line, which will run under parts of his land. But his message to Washington, when it comes to the Biden administration’s climate and infrastructure agenda, is one of caution.

“I’d say slow down. Take it easy; take it one step at a time,” Meyer said. “From the speed on his approach … to all this — electric cars and electric trucks. There’s gonna be a lot of bumps in the road to make that happen. Just slow down; don’t shove it down our throat. Let us choose it.”

Agreeing to permit construction of a piece of the SOO Green line, Meyer added, offered that kind of choice — and allowed him to overcome the skepticism he still harbors about Biden’s proposal.

Ward, too, was hesitant to tie the potential of the project — which he said would create more than 2,000 union jobs in addition to some 4,000 more upstream with the building of feeder wind and solar farms — to any federal legislation, though companies like his would benefit from the tax credits in Biden’s plan. The SOO Green transmission line was in the works before the President took office and Democrats took control of the Senate this year, and its construction timeline could outlast the current administration.

But he echoed Biden’s message on the intersection of clean energy and the economy.

“Large infrastructure projects like this have economic benefits that ripple throughout the economy,” Ward said. “It’s good for landowners. It’s good for farmers. It’s good for the environment and it creates jobs. And it also gets low-cost renewable energy to the cities and towns that need it.”

The political fault lines that are stalling negotiations in Washington are blurrier in Iowa, even among conservative elected officials in the state.

Republican state Rep. Bobby Kaufmann, an avowed conservative and “staunch supporter” of former President Donald Trump, said he’s “fully onboard” with the SOO Green plan, in large part because of its approach — which has been more sensitive than past efforts to locals’ land rights.

But Kaufmann also described the project, simply, as good business.

“I see it as a long-term market,” he said. “As a farmer, we look for markets for our corn, for our soybeans, for our meat. And this is just a market to be able to ship energy that we’re creating here in Iowa through the wind, out to customers over in the East Coast and on beyond.”

Asked whether his bullishness extended to the legislation being proposed by the Biden administration, Kaufmann said he would wait and see how the process unfolded — and whether Republicans were, to his mind, sufficiently brought in on any deal.

“Both parties have green infrastructure support systems that could be in a final bill, so I’m not going to sit here and say that I am completely for the Republican plan or opposed to the Biden plan,” Kaufmann told CNN. “I just think that the best plan is what we do here in Iowa, which is when everybody has some input and everybody gets on board.”

‘That’s where the sales are’

Often to the frustration of more liberal lawmakers in his own party, Biden has sought to forge a bipartisan compromise with Republicans in the Senate. But that outreach has not yet yielded much movement from the GOP bloc that is, at a minimum, willing to talk. One round of talks broke down on Tuesday; another began shortly thereafter.

There is significant and well-founded skepticism among Democrats of all stripes over whether the administration can find the 10 Republicans it needs to avert a filibuster and pass even a stripped-down version of Biden’s initial offering.

Meanwhile, leftist lawmakers in the House are beginning to hint that a compromise that shrinks the package too much would be a nonstarter — a state of play that leaves the administration a very narrow, closing window of opportunity.

In West Virginia, home to Democratic Sen. Joe Manchin, who has insisted the end product have bipartisan support, there is among some clean energy-reliant business owners a similar mix of excitement over the possibility of a leg up from Washington and doubt over the scope of the Democratic agenda.

Darus Zehrbach, president of Z Electric Vehicle, said some of the discussion around the infrastructure bill suggests a disconnect from where he and others in his industry see an opportunity to grow the market.

“If the fleets in the United States government and state governments shifted to electric you’d see a major rush to be buying the electrics,” Zehrbach said. “Don’t sharpen the stick; get a bigger carrot.”

One-off sales, Zehrbach argued, were a trickier proposition for the government than seeking out municipalities or businesses that might be looking to buy clean energy vehicles in bulk, in part because they cost less to fuel and maintain.

Talk of installing charging stations at gas stations, he added, ignores that even for individuals who use electric vehicles, the more common practice is to charge them at home for regular travel, like commuting to work, over short distances. (The Biden administration has acknowledged this, but argued in an April statement that “public charging infrastructure will provide a key role for people without off-street parking and for longer trips.”)

But like with so much else in American politics now, the challenges facing proponents of bold new clean infrastructure legislation are as much about complicated realities as head-spinning distortions.

Zehrbach described some of the critical “talk that’s out there” in Morgantown, where his business is based, as focusing on threats — all false — of coming government seizures of old vehicles and artificial increases to gasolines prices.

So what is the right way for the administration to sell the plan, with that kind of misinformation hanging in the air?

“If you talk about phasing in to electric and the fact that they are, at least, looking at it and trying to figure out how to do it — I think that’s the big positive,” Zehrbach said.